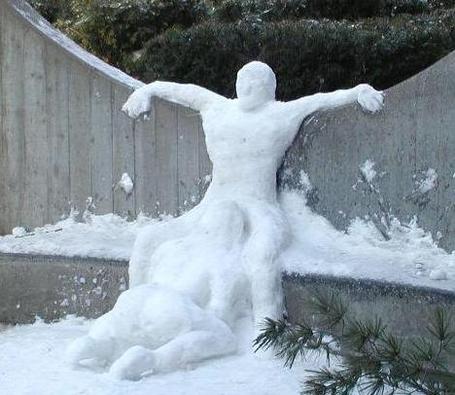 Don't know where I heard this, but someone recently said that it would be a good thing if one of the Canadiens goaltenders would be capable of stealing a game to kickstart the team's confidence.

Not with their charitable play of late!

To the surprise of many, last night Jaroslav Halak did his best impersonation of Dwayne Roloson, who two nights earlier, committed grand larceny on some of the Canadiens more lively bodies. Against the Avalanche, he did much the same. Perhaps for Halak, facing the NHL's only other Slovakian goalie Peter Budaj was motivation enough.

Halak was good - real good, and for a spell looked like he'd challenge Wayne Thomas' 36 year old record for most saves in a game by a Canadiens goalie with 53. His vision of the puck, his concentration, and his control of rebounds were all spot on for this game. 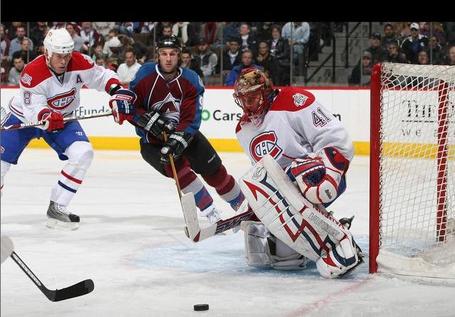 Two goals beat Halak last night and both could be called peculiar.

On the first - by Jordon Leopold - the Canadiens became outnumbered after a slow line change.

What set up the lackadaisical pace to and from the bench?

How about the oddity of Georges Laraque beating out an icing call in Colorado's end?

The Avalanche quickly turned the puck over and into the Canadiens end, and Leopold skated unharmed into the crease and pounced on an easy feed.

The second goal to beat Halak ricocheted off Josh Gorges' back, and the seeing eye puck then skittered through Halak's pads, just trickling over the line.

On the other 46 shots, Halak was as good as I'd ever seen him, and it was a good thing for the Canadiens that he came up with the effort, because for the final 40 minutes of this game, the team in front of him were listless at times and badly outshot 36 to 9. 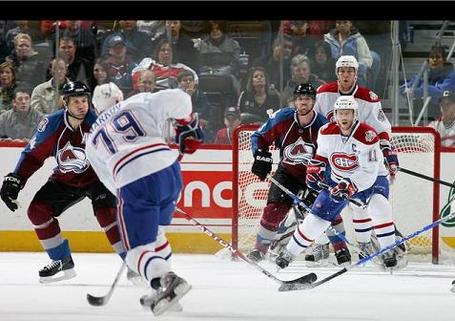 It's difficult to understand what the Canadiens were trying to do in this one. Maybe the game plan didn't envision them having a two goal lead at any point? At the 8 minute mark of the second period, the shots were 18 to 15 in favor of Colorado. With the score 2-1, the Canadiens were on their heels.

RDS alluded to the effect of the thin Denver air having an affect on the team as the game wore on, but I saw something else at different points.

Starting at the midway point in the game, the Canadiens set up the trap. It was most evident with Higgins' line, and you could see him back up all the way to his own blue line to defend against the Colorado rush. With the tightning up in their own end, the Canadiens began allowing the Avalanche the perimeter of their zone, and they fired happily from there as often as they could.

As this played out, the Habs hung on for dear life, icing the puck too often and too recklessly, come the third period. With the score tied, it looked like they were hoping to settle for overtime, when Dandeneault sprung the gentle tank tht is Andrei Kostitsyn loose for the eventual game winner.

I didn't hold out much hope for the Canadiens in this one, what with the nutty set of lines devised by Carbonneau in light of the Plekanec suspension and the late arrival by Chipchura. 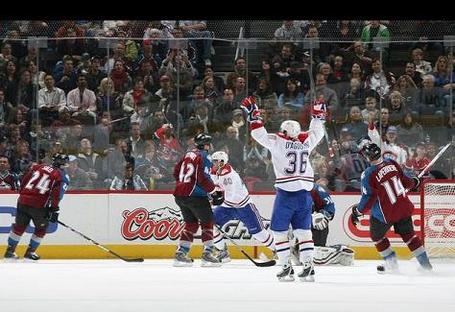 The trio of Koivu centering Kovalev and Kostopoulos - a KKK line, no less - definitely had their moments good and bad.

Kovalev may have wondered how a player with so little offensive potential as Tom the Bomb finds his way to the top line.

Kostopoulos could equally have wondered why a slacker like Kovalev was doing with a pair of energy players.

Kovalev for his part, seemed to have a few moments of energy and synergy with his new mates, but they were sparse. At least he was placed on a line where his nonchalance would be less evident. As many as four times, I saw Kovalev pass to Kostopoulos, almost as if to say, "Try to handle this pass, big guy!"

Koivu, like Higgins, spent large chunks of the game playing deep in his end, gettting in the firing line of shots a little more often than I'd like to see him do. No one will ever need to explain what sacrifice is to Koivu or Kostopoulos. At the opposite end, Koivu was his usual puck persuant self, digging in the corners and heading for the crease lip scoring chances. On the Brisebois goal, he was credited with an assist when he was hit by Markov's point shot and it bounced to Brisebois.

The win for the Canadiens, regardless of the weakened Colorado opponent, is a thing to build off. The goaltending was solid, the defense less hari karied, and the forward lines seemed committed to playing closer to them than they had in previous demolishings.

With the Habs reduced to having to begin from small positive steps, this messy win was only that. Nothing to be too excited or proud of, but a step in a better direction nonetheless. A similar effort tomorrow night in Vancouver may not suffice.