I went out for my morning coffee today wearing my Canadiens hoody, and two acquaintences said I was a brave man.

They think that being the target of verbal barbs, darts and arrows because the Habs are stinking makes me brave to wear their colours. Hardly. My response went something like:

"Call me brave when I rescue a child from a burning house. In the meantime, bring on the Canadiens critiques, I have thick skin."

With my coffee in me a little later than usual today, I pondered writing once more on the Habs woes. With ideas spinning in my head, the redundancy of it all I felt was better saved for another time.

"Readers must be sick of reading this shit", I thought to myself. Sometimes a change of pace is a good thing. 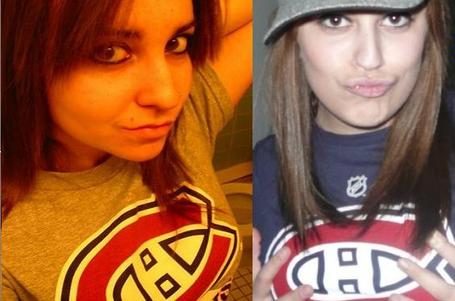 I thought it good to deviate this Friday morning and post some Habs girls and some hockey tales to help alleviate the chagrin we're all in.

First thing I'm asked this morning was whether I thought Carey Price would be in Vancouver. I answered that he most surely would. Not a doubt in my mind.

I was called delusional, and I was laughed at. I didn't get it. I started to explain, but the old guy just shook his head.

Turns out he was talking about the 2010 Olympics. I'm still stuck on Sunday night. Slow down, dude! I haven't given a rats rear about the Olympics since the Blackhawks won the Cup. 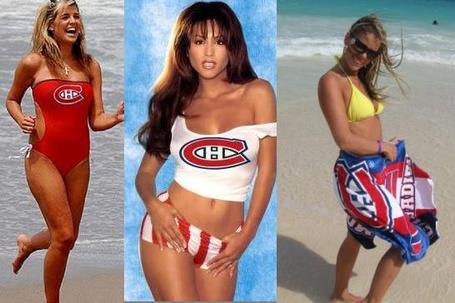 Speaking of old Cups won, the Red Wings are one classy organization. They had 20 or so Stanley Cup rings made in the likeness of the 2008 ring and FedEx'ed them to former players, such as Marcel Bonin, Marcel Pronovost and others.

Players back in their day were not given Cup rings as is now the tradition. Detroit caught up with two dozen or so former players still alive from the four championships between 1950 and 1955 and gifted each with a ring.

The player's ring had one diamond for each Cup won with Detroit, and Pronovost's had four. Bonin laughed, as he recalled the FedEx driver phoning him to ask if he was a jeweler. 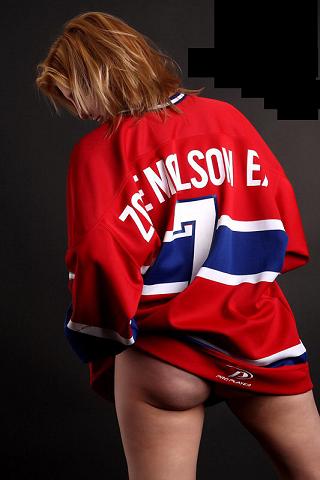 Bonin later joined the Canadiens, winning three more Cups between 1958 and 1960. His 1959 playoff is one of legend. After having blown out the palm of his gloves and not being pleased with breaking in new ones, Maurice Richard, who was injured, offered his.

Not known for his goal scoring ability, Bonin then lit the red light 11 times in 10 playoff games. Bonin scored 10 of those goals in the first seven contests, when the Rocket returned from injury and took back the hot mits.

Speaking of the SIHR, I joined up back in December, and their member only site and newsletter are absolutely awesome and well worth the small price of $30 annually. The background information on players alone is enough to keep me on their pages for hours at a time.

I am presently researching and compiling a list of all transactions made by the Canadiens in 100 seasons based in great part on the 100,000 player profiles in their database. As the Habs have owned rights to possibly 1300 players, were talking about quite a task. I'm uncertain as to what I will do with it when I am finished. It may get it published in their newsletter or at this site, but I may also save ownership of it in case I one day decide to write a book. 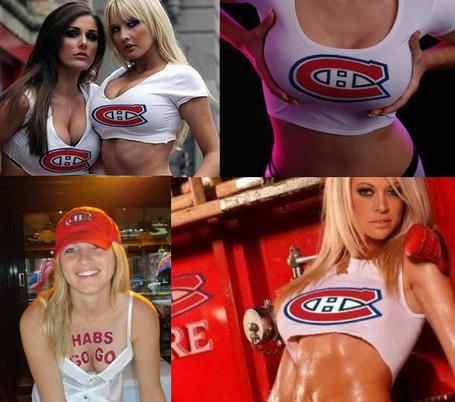 One photo I found at SIHR was that of a young Pat Burns, then coaching the Hull Olympics. Each morning, I listen to Burns on CKAC and he was talking about the Canadiens goalies this morning.

In Burns' opinion, Halak would better be served by playing in Hamilton and that the Habs should get a veteran goalie to push Carey Price. 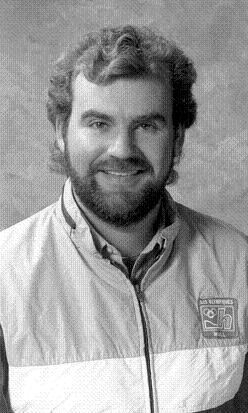 The conversation was all about how and where to best rebuild Price's confidence and Burns said that Hamilton is not where the challenge for him rests. I agree.

The former coach says a great part of Price's problem is the team in front of him.

Burns also said the Canadiens missed the boat in not reaquiring Mathieu Garon.

Yesterday, Burns mentioned that he could see Tomas Plekanec getting two games for the slewfoot on Denis Grebeshkov. Host Michel Langevin said the NHL must have listened to him. 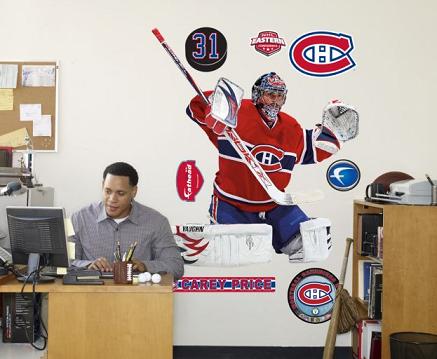 A little while later, I was in the car coming home, and the show was discussing Hamilton Bulldogs goalie Marc Denis being called up. I'm uncertain of who was speaking - I think it was play by play man Danny Dube - but he quickly dispelled any speculation on Denis getting the call.

He related that back when Price was hurt, and Halak played out the string of games until he returned, that two things pointed to the Habs brass having a lack of faith in Denis. It was said that on two occasions, the Canadiens had played on consecutive nights, and that Denis would have been given the green light in one game then had the team felt he could do the job.

Dube, if it was indeed him, says that he occasionally watches Bulldogs games online, and that Denis appears to be doing well in that context, despite the quality of shots he faces being nowhere near NHL calibre. 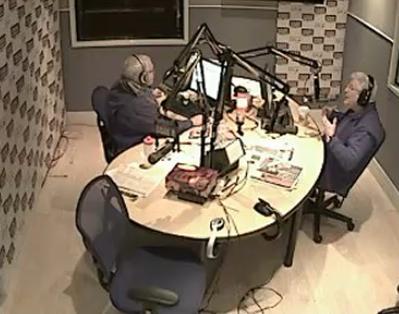 During a November 30 game at the Bell Centre, the Bulldogs played the Binghampton Senators before the Habs brass. Denis allowed four goals (one empty-netter) in a 5-3 loss, and Dube said that Gainey, Carbonneau, and goalie coach Rollie Melanson were seated together and looked unimpressed. Dube, who was sitting nearby, said that each time a puck beat Denis, they turned to each other as if to suggest they were disppointed.

At the CKAC site, there is also WebTele, where you watch the talk shows live. I'm listening to Yvon Pednault at the moment, talking about Guy Carbonneau's current troubles.

Oddly enough, Pednault is relating a story that happened on January 11, 2006 in Colorado, where the Canadiens coincidently are playing tonight. The game, in which the Habs lost 2-1, was the final straw for coach Claude Julien, who was to be replaced three days later. 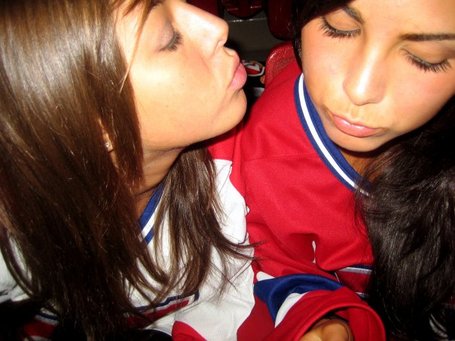 As Pednault tells it, he was in Colorado for the game, and ran into Carbonneau after it was over. The Canadiens current coach was in the press box, on duty as assistant GM for Dallas, and told Pednault he was in Colorado to scout both the Avalanche, and their next opponant - the Rangers - as both were soon to be playing the Stars.

Pednault thought he had himself a scoop. He had spoken with Rangers GM Glen Sather just days before, and he mentioned to Carbonneau that Sather had dropped his name as a prospective Ranger coach the following season. Carbonneau told Pednault that he was unsure at the moment if he wanted to go behind a bench, but that his contract with Dallas was expiring at the end of the season, and that he would decide then if there was any offers to choose from. 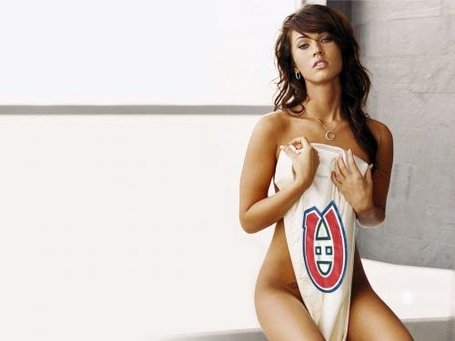 Carbonneau told Pednault that if he time on Saturday, he'd give a call. Pednault wanted more for his supposed scoop.

Bob Gainey was also sitting in the Canadiens pressbox that night in Denver, but Pednault never put two and two together. The following Saturday morning, Gainey called the surprise press conference that blew everyone out of the water, and announced that he and Carbonneau were taking over.

I'll never forget the sight of the two of them sitting together at that presser! I was stunned.

I was in Toronto that weekend, for my daughter's hockey tournament. I was standing in an enclosed upstairs endzone restaurant watching her game at the time. A parent on our team gave my shoulder a shove, just as my kid hit the goalpost on the ice below. The parent pointed me towards a TV set, and I saw Gainey and Carbonneau sitting side by side before the Canadiens logos in the press conference room. The was no audio on the TV, but a loud cheer confused me as I looked around. Our team had just scored, and I missed my daughter's goal.

On a final note, I wonder if when the Canadiens look in the mirror, do they see that everything is backward? 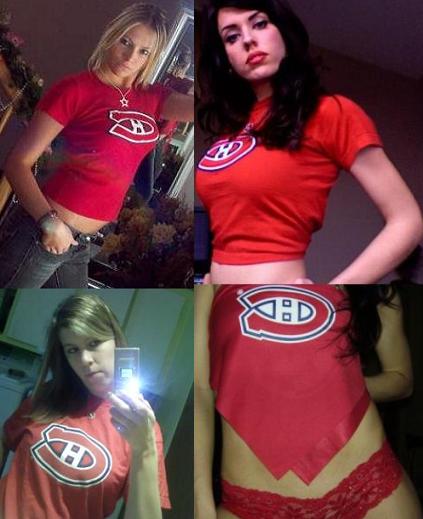 In 2001, members of the Society for International Hockey Research voted for retroactive Conn Smythe Trophy winners from 1918 to 1964 and chose Bonin as their 1959 recipient.