Share All sharing options for: Canadiens Enter The Twilight Zone 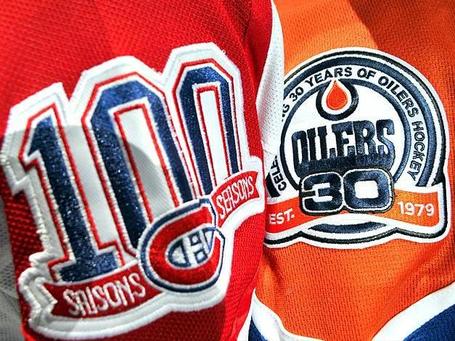 I'll admit that I don't feel anymore like writing than you probably do reading about it. Sometimes therapy is downright exorcism. Some things, you just have to get out of your system!

When you reach a point in something, where nothing makes any sense, hockey (life) starts to resemble an old episode of The Twilight Zone.

The 7-2 loss to the Oilers last night, was in fact quite comical!

It wasn't just in the comedy of errors that played themselves out, but in the whole unbelievability of the situation. Anyone who sadistically stuck through watching the entire 60 minutes like I did could attest.

There were some weird things going on, man! Real weird!

I'm still trying to figure out how the Canadiens could outshoot the Oilers 38 to 27 and still suffer one of their worst defeats in years.

It might explain why I was glued to the set last night, unable to pull myself away as the debacle unfolded.

I'm trying to figure out how it can be that Carbonneau can dress two additional defenseman as forwards in order to tighten things up to get both ends to play with some synchronicity, and yet the defense plays with more lack of composure than ever, and the offense goes hog wild with scoring chances, but cannot convert. 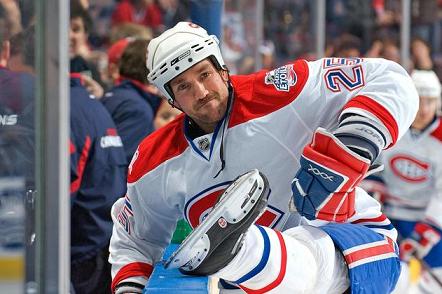 The Canadiens would buzz the Edmonton goal for 30 seconds, hit the net three times, shoot wide three times, get all bent out of position, breakdown on the transition as the Oilers would mount a counter attack, enter the Habs zone, fire a puck at the net that would hit the back of a leg or stick, deflect onto the blade of an uncovered player with a snatch of open net, and bingo - they Oilers score!

It went that way for good stretches of the game.

Of course the Canadiens were as guilty as they have been in any other game recently, of playing some of the most dyslexic hockey you'll ever see. The basic fundamentals of their game have vanished almost completely. There's not a shred of composure in sight. There is not a stitch of confidence in self or faith in one another. Due to constant shuffling of lines and roles in search of a solution, even the most simple of plays goes haywire. No one seems to know their job out there anymore, yet they're all attempting to do each other's work.

Look at the goals the Oilers scored!

Mike Komisarek was the goalie beaten on the first Oilers goal. Price was way out of position, either thinking he had the puck, or had lost sight of it. This was a recurring theme on this night. Another goal was deflected by a crossbar height high stick. One goal bounced off Price's mask as he lost sight of it. Stortini's deflection skipped and bobbled over Price's glove, landing behind him. On Cogliano's goal, the puck was poked loose as Price was about to freeze it, obviously too nonchalantly. The fourth goal - Hemsky's - was a carbon copy of the first, with Price off to crease left, and Komisarek kneeling to try to block to open side in the crease. The Oilers also scored shorthanded, when the puck bounced off an official, placing it perfectly for Brodziak on a breakaway.

Carey Price had a nightmare of a game. You can see his confidence has been zapped. It was pitiful. He's lost the grip on his basic positioning, and is overplaying routine shots, kinetic in all the wrong ways. The usually coolest head on the team is now it's worst, twisted reflection. 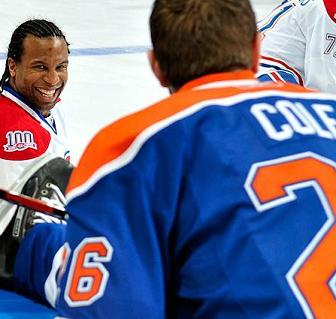 Laraque, put into the lineup for toughness, never drops the gloves, yet gets 3:22 of powerplay time.

Now you wonder why players on the team don't know their roles?

Dandeneault, who misses 30 something games with a wrist injury and hadn't scored all season, gets a goal and an assist.

Bouillon, more snakebitten than any other player of late, finds the net too.

Gorges, who was an inexplicable plus 2 against Calgary, is moved up to the wing, and goes plus 2 again, despite looking terribly lost.

Komisarek was credited with not a single blocked shot. When was the last time that happened?

Edmonton turned the puck over an incredible 16 times, but rarely paid the price.

Montreal committed a stratospheric 25 giveaways, five off the stick of Andrei Markov.

I'd look for more strangeness, but I'm bordering on obsessive / compulsive disorder as it is.

It would be an exercise in futility to even begin critiquing the play of certain individuals. The problems are so widespread that it affects all players to different levels each game. To name but two - I thought the effort by Saku and Hamrlik was commendable in the face of adversity.

No doubt the result of this one was disastrous, but in the details of the calamity outlined above, there is a silver lining.

Call me crazy, but I think that because everyone one the team is playing so terribly out of joint, that it makes no perpetrator any better than another. With guilt shared, and admitted to, and hopefully soon worked on and conquered together, perhaps they are finally willing as a group to understand what the way out of this mess entails. It is plain for all to see.

There are opinions of course, that this Canadiens team doesn't give a rats ass.

The Canadiens out hit the Oilers 27-11 last night. They also badly outchanced them as well. The effort, as maligned as it is, was there.

They are working hard, but in all the wrong ways, and their repeated errors have become habitual.

I have a thought, and it's better than bowling. Practice more. Practice longer. Practice more specifically. Quit messing with the lines. Create more definition in roles. Face the problems head on.

When the Canadiens were in the southern states a few weeks back, an early morning practice was held. Coach Carbonneau explained that it was not punishment, that it was in fact done to allow the team a larger chunk of time to enjoy the surroundings. I say no more of that.

The players are paid to practice. It is a part of their job. They need to be forced to practice as long and hard as need be to correct their mistakes. Practicing doing the right things will make those methods habitual again. It is that, which has slipped away.

The practice sessions may be tedious, boring, and frustrating, but it is the way out. It is how good teams, who want it bad enough, get out of such ruts. The things that become habitual in practice will eventually start to come by naturally on the ice.

In that, Guy Carbonneau will have to become an absolute bastard - the kind of coach he does not want to have to be. But, the situation requires it immediately and desperately.

There are lessons in Canadiens history all about the merits of working hard in practice. Players who played on the Habs 1950's dynasty constantly mention that the club practiced at an even higher tempo than they played at. Coach Toe Blake ran his sessions with emphasis on speed, execution and physicality. League games in comparison, it was said, were a breeze, because no one played the Habs as hard as the team played against itself in practice. The routine translated to the ice, and became habitual. It was just the way they did things.

Times have changed of course, but the merits of hard work have not. Those who want something badly enough, find ways.

I almost didn't write this post today, but I'm glad I did. It was worth the effort. Just think, I could have been bowling!