When The Going Gets Tough, The Tough Go Bowling

Share All sharing options for: When The Going Gets Tough, The Tough Go Bowling 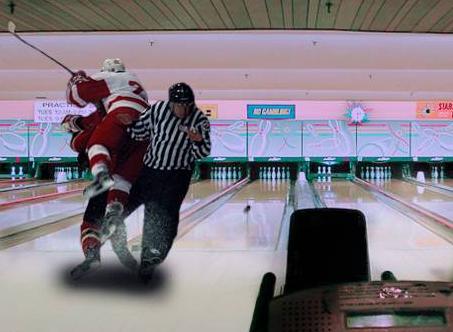 As you may or may not have already heard, the Canadiens cancelled the scheduled Tuesday practice in Edmonton, and threw the players a much appreciated curve - an afternoon of ten pin bowling!

The trip to the lanes could be seen as a much needed distraction from the daily routine. It could've been thought up as a bonding session of sorts, after a players only closed door meeting was held after the third period in Calgary. Perhaps it was a well advised safely valve mechanism for the mounting frustrations of players unhappy with the present drought.

Maybe it's just a different slant on getting players to pick the corners off in a more relaxed and lighthearted manner!

The idea to wipe the practice off the day's slate came from management, after the previous evening saw the players speak their minds to one another, without coaches, and against NHL media policy, for 30 minutes following the 6-2 burning at the hands of the Flames. Bob Gainey, who is along for the trip, was the only non particpant at the lanes.

The event was said to be appreciated by players, whose minds likely would have been cluttered by all kinds of issues had the team hit the ice as scheduled. At this point in the season, and with what has gone on recently, the team brass understood that it wasn't the proper chosen moment to head to the arena and work out the wrinkles of the game for upteenth time.

Perhaps the most disconcerting news to eminate from the day, was a quote by Alex Kovalev that suggested that the players were tiring of the centenary festivities of the 100th season. La Presse's Francois Gagnon, who knows how to stir shit when he sees fit, quoted Kovalev as saying, "I'd like to say that it has had no impact (on the team), but that would be false. The team is so popular in Montreal, and all over Canada. It's big, and it is obvious that it has repercussions. To what extent, I'm not certain."

It marks the second time this season that Kovalev mentions the distractions, and thankfully he didn't go into more detail when prompted.

You could gather that looking at things from a players's point of view, that having to don the pyjama style 1913 jerseys in a crucial game against Boston may have left a bitter taste.

Coach Carbonneau for his part, explained the day's change of course, saying "I had two choices. I could have beaten them over head, or break the routine. We chose the second option."

The idea to go bowling has Bob Gainey written all over. The GM once cancelled a practice, bringing the team to the movies one afternoon, in similar circumstances.

Speaking to RDS, Carbonneau clarified that "the closed door meeting the players held, incited me to change plans. I could have made them sweat it out for 45 minutes, but I didn't think the focus to do so was there on their part. Sometimes, it is just better to get together and do something else. The players had a great time. We spent three hours together laughing and picking on each other. In my estimation it was preferable to do that instead of hitting the ice." 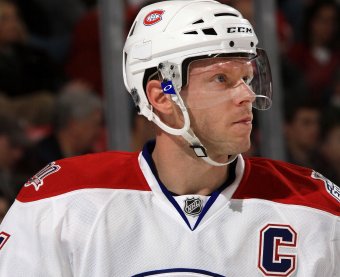 Habs captain Saku Koivu sought to minimize the importance of Monday night's unscheduled team meeting, suggesting that teams get together much more often than is known to air things out.

"What was different about this time", Koivu stated, "was that we decided to hold it immediately after the game. It's not something we do from the goodness of out hearts."

On the trip to the ten pin lanes, Koivu put it this way:

"No matter what we did today, the important thing was to do something different." Mentioning the trip to the movies three seasons ago, the captain said, "the objective was to help clean the slate. We spent a few hours together with the coaching staff, and we had a lot of fun together. We had the long talk Monday night. Now we won't discuss things until before the Oilers game on Wednesday."

Carbonneau was asked the obvious, if the unity of the group was in question.

"The spirit and comraderie has never been a problem. I wouldn't say we are dysfunctional on the ice, but we're trying to do too much. We'd like to see certain aspects function better."

"Despite everything", Carbonneau added, "looking at the standings, we're still in fifth place. It's tight - for everybody. It's up to us to get our act together."

On Kovalev's words regarding the centennial being a distraction, Carbonneau said "I'd like to think that it's not the case, but it remains to be seen. To what level? I don't know. We had a good first half of the season and lots of activities were planned then. Maybe because of the popularity of the team in Quebec and all over Canada, there are certain players who may have begun thinking that they are better than they are, but I can't believe that would be the principle reason for our problems." 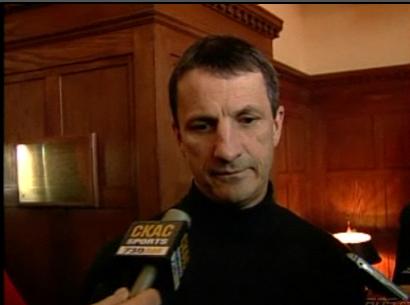 Carbonneau recognized that the prolonged absense of certain veterans - Gainey's two main off season acquisitions, Lang and Tanguay - could be part of it.

"The young players did well in December and January, when we had lots of guys out of the lineup, but now they are having problems themselves. They feel the pressure more, and they are also better known by the opposition, who are wtching them much more closely."

Carbonneau is resigned to having to go forward with the lineup at his disposition, knowing well that few trades occur in today's NHL. He went on to suggest that if this group had found success in the past, that it could do so again. He remarks that if they had just won their two most recent games, the Canadiens would still ranked fifth or sixth overall in the league.

"I'd rather be in this position", he concluded, "than be in last place and playing well."

As realistic as his glass half full outlook may or may not be, it is a good thing that the coach has remained positive. Anything else would be dire.

Carbonneau must have bowled in the 200's!

Check out the coach's interview from RDS, at this stream.

UPDATE:  The bowling session didn't produce the expected result, but the Habs did find the gutter. Now they have entered The Twilight Zone!