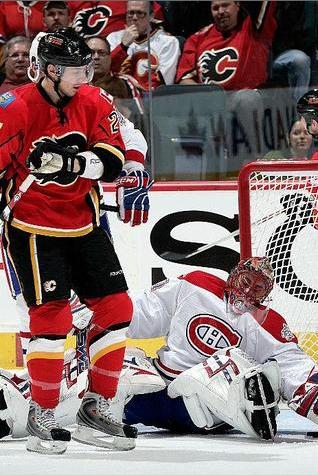 Instead of a game analysis from last night, I thought I might just disect one particular play gone way wrong that became for all intents, the turning point in the contest. In breaking down what occurred in the middle of the game, for context and set up, the penalties and flow of the game are required to be mentioned, for perspective's sake.You may take certain points made here, as wailing on the officials, but I've only brought them into it because I believe it to be where the Canadiens heads are at when their work is contested.

This is how it all goes when things go wrong.

With the Canadiens leading 2-1 early in the second period, there were a sequence of events that as a simple viewer, took my head right out of the game. I often wonder if as a player, I would be as buggered by what went on.

Up until that point, the Canadiens players were holding their head above water with the slight lead, despite being edged in shots by Calgary. The 17-10 Flames margin might have been more representative of the flow in play than the score at that time, but there was a tendency that began to emerge late in the first period.

At the 17:45 mark of the first, Lapierre and the Flames Pardy were sent off for coincidental roughing minors. The Canadiens scored on the ensuing 4 on 4 to take the lead.

From then on, after every stoppage in play brought on by a Jaroslav Halak save, the Flames forwards charged and jammed the Montreal crease, roughing it up with each Canadien player willing to scuffle. They were relentless in it, and you could sense it was becoming tiresome and wearing on the Canadiens players, who were not retaliating with the same tactic at the opposite end.

These types of battles are pure emotion after the whistle and the instigator of it is rarely if ever penalized alone. As the Calgary defenseman were not joining the fray, five Habs players were left to deal with three frisky Flames. On two of those occasions, I watched Calgary make a line change during the stoppage, as Montreal left certain players, or all five players on the ice.

I'll assume the five players were the matchup Carbonneau wanted, as he chose to leave them out there after the had dispensed their energy roughing it up over nothing. Calgary, for their part, had five fresher bodies out there, including the two defenseman who remained out of the rough stuff.

The Lapierre and Pardy minors were the first calls in an increasingly rough game, and the Canadiens again, were looking like they wanted no part of such a type of game.

As the first period ended, Roman Hamrlik was called for roughing for what could be termed a late hit on Rene Bourque. It could also be termed a judgement call. When the hit was made, the officials arm did not go up. It went up when Bourque charged Hamrlik, punching him to the back of the head. Players on both clubs then pilled on, and I was curious to see when the second period started, if Bourque would be going off alone, or if Hamrlik would be joining him. Much to my surprise, and dismay, the officals decided to send both off, with an additional roughing minor added to Max Lapierre, the first Canadien to pull Bourque off Hamrlik.

After killing off the Lapierre minor, the two teams played at even strength until the 5:05 mark, when Josh Gorges was sent off for tripping. Again, the call could be somewhat debatable, as the Flames player with the puck seemed to try to hop over Gorges extended stick, intented to cut off his path. There seemed no distinct motion by Gorges to warrant the call.

Thirty eight seconds later, Tom Kostopoulos goes for two after, giving Jarome Iginla the gentlest of crosschecks shoves behind the net. It wasn't the most flagrant of fouls, but the motion and intent were clear enough to get the hook. The Canadiens killed both penalties off, but by the end of them, had only played 3:05 of even strength time of the 7:43 that had elapsed of the clock until that point.

I mention all this not to specifically point out the officials errs per se (judgement calls being what they are), but to point to what occurs to the Canadiens players focus and discipline in moments of adversity.

I have long had concerns about the mental fragility of the Canadiens players when the calls come out from left field, as they could be interpreted to have. Perhaps it eminates from opinions from behind the bench as to the validity of the calls, and the least little word or smirk from the coaches tends to absolve the player's wrongdoing. Either way one looks at it, the errors of the players on the ice are repeated instead of the lessons being seized and prudence preached. 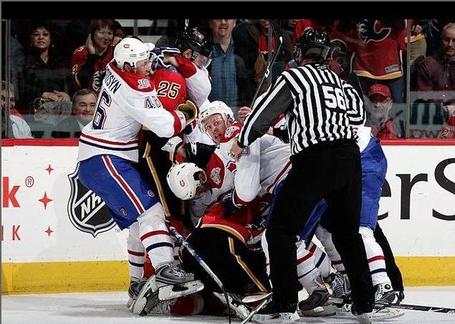 Now preaching such prudence about infractions is where it gets mental, in my eyes. As I mentioned at the top, as a viewer, my head just goes right off thinking about how a player should proceed here, how they should react to the game in light of how the calls are going.

In the competitive spirit of the player, he never feels the call on the foul is warranted. When the camara zooms in on the player when the whistle is blown, one can often read their disagreement. Combine this fact with the feeling on the bench, and you get the impression that players do not easily learn their lesson.

But then again, it is hard to.

The context being that it was a physical game, it is possible that the players become tentative and timid, in that they back away from doing what would then come instinctively. The players start thinking too much out there, and that isn't always a good thing. Confused perhaps, by the officials inconsistency, they back off from the physical play, and their focus suffers with it. Considering that referee Chris Lee was handling the game, the Habs players can almost bank on all sorts of surprises.

Again, this is not to target the officials, but to show how easily the Canadiens can be undone by these triggers.

What's happened up to this point, practically sets up what comes next, and the combined adversity hits the Canadiens with such a blow, that it knocks their heads right out of a game they had been winning after 30 minutes.

At the 9:55 mark of the second period, the Flames' Bourque is sent off for goaltender interference, and the Canadiens are given a timely powerplay. Perhaps from playing half this frame shorthanded, the Habs first minute of the PP is terribly out of synch, and sixty seconds plus pass without much opportunity.

As the puck is cleared into the Canadiens zone, Sergei Kostitsyn, who is playing the left point, returns to fetch it. As he circles up ice, his options have disappeared. Defense partner Andrei Markov is not alongside him, but casually heading for the bench. No one is with Kostitsyn behind the blueline, except for center Tomas Plekanec, who is off to the far left board, a stride or two behind. As Plekanec's positioning removes him as a pass option, Kostitsyn skates up the middle and finds winger Matt D'Agostini curling into his path. At that precise moment, Kostitsyn is met by Flames forechecker Mathieu Lombardi, who is on top of him just as all of his options conspire to eliminate themselves. A second earlier, Kostitsyn's best option would have been to dump it up the left boards, but it's now too late. Winger Chris Higgins is at the opposing blueline, out of the play. Plekanec has surpassed the play by a few feet. D'Agostini is now directly behind Lombardi, and rushing off the bench is Hamrlik, in a footrace with the Flames Curtis Glencross. 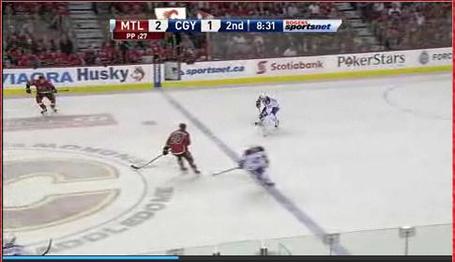 Kostitsyn is spun by Lombardi, who steals the puck, and heads in alone. Hamrlik gains a stride on Glencross, but is hauled down with no call. Lombardi dekes Jaroslav Halak, and lifts the puck past him.

Immediately, the Canadiens protest the hook or trip by Glencross, as seemingly incidental as it might be in regards to the goal.

This is all the fragile Canadiens needed to lose their grip on this game.

It is often said that hockey is a game of mistakes, and several were made in this mere 8 second span. The Canadiens have been pointed of late, for a lack of one ice communiction. This whole mess of a play was a perfect example. 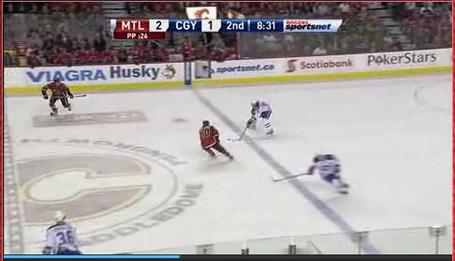 Higgins was out of the picture, having not returned to the deep neutral zone to accept a pass. Plekanec returned deep as he could, but cut too wide, failing to remain behind Kostitsyn. Plekanec is not the player who should have been there either way. That responsibility belonged to Markov, who, as the only defenseman proper on the ice for Montreal, was strolling to the bench leaving Kostitsyn, a forward playing back, to fend for himself. Talk about a breakdown!

At the Canadiens bench, there was some howling about the call of course, There was merit there, but the moment quickly passed. Any time - and especially in a close game - when a shorthanded goal is scored against a team, it is a time to quickly gather one's wits. Considering the fragile state of this team, that moment desperately needed to be taken. As practically every player on the ice during this goal had screwed up, a respite of sorts was required.

With the coach arguing the call, four of five players out there, save for subbing Komisarek in place of Kostitsyn - were sent back out, heads reeling. Thirty two seconds later, boom! Another goal!

The entire minute had done the Habs in, and they were out of this one.

That is how fragile the confidence in themselves, and the faith in each other has become.

(I'll let readers judge on the Glencross call. I say it's a trip or hook. There are freeze frame clips here, and a slowed video at the bottom of this post that break down the entire play. Keep an eye on the clock to see the fractions of seconds passing. Watch how Hamrlik thuds to the ice, as he is about to dive. In his strides, there is no pump in his legs to predict a lunge for the puck. I found it quite obvious on first view, and even more so thereafter.) 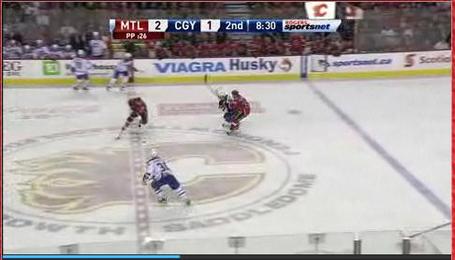 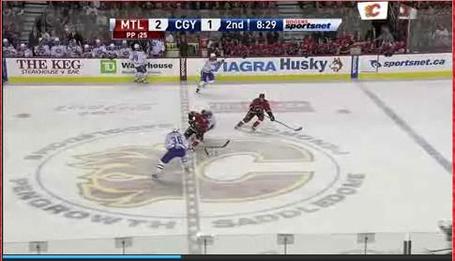 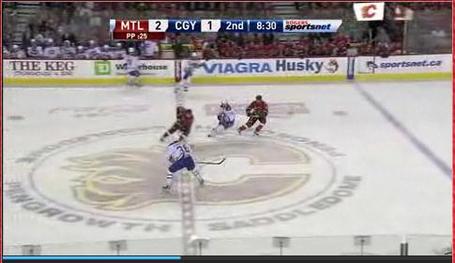 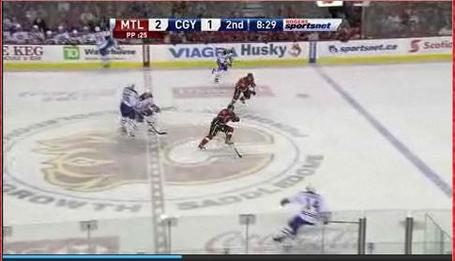 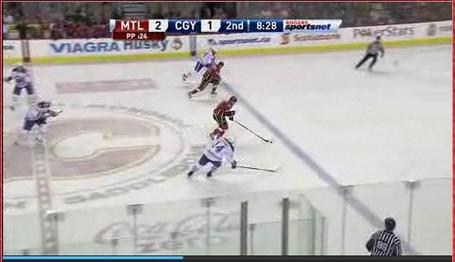 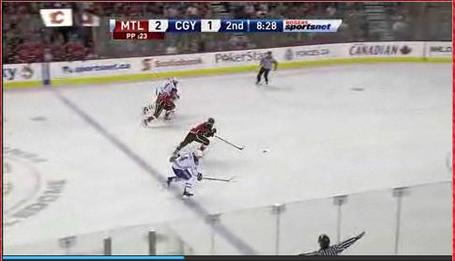 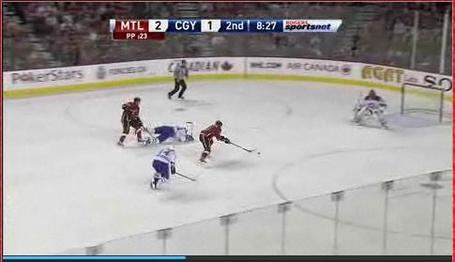 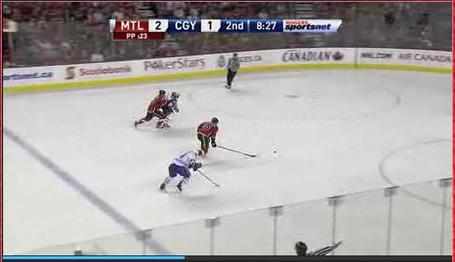 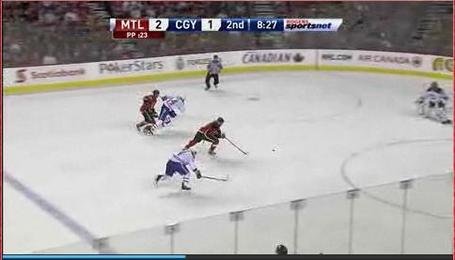 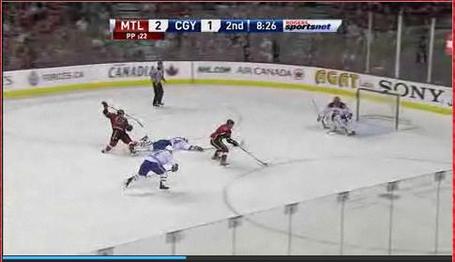 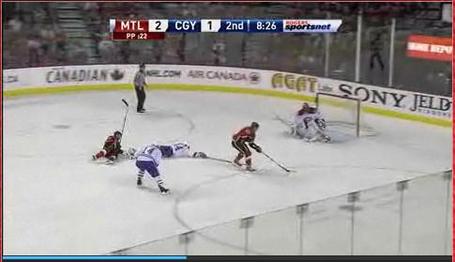 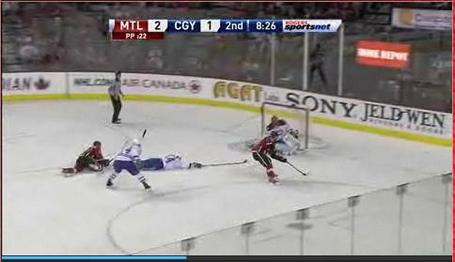