Henry Called Up After Gauthier Hit On Gorges - Where Were Team Mates?

Share All sharing options for: Henry Called Up After Gauthier Hit On Gorges - Where Were Team Mates? 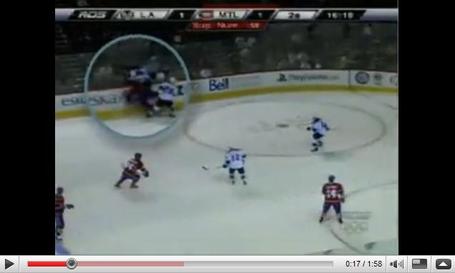 Another weekend of hockey, another highlight reel headshot.

This time it was habitual perpetrator Denis Gauthier of the Kings, a player with a long history of dirty deeds who took a solid run at the Canadiens Josh Gorges and knocked his noggin into a different time zone.

After being steamrolled, Gorges lay on the ice for several long seconds before somehow finding in his consciousness, a way to come to his feet. He stumbled in a dizzy haze, as concerned team mates and trainer tended to him. 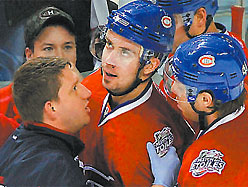 There has been some controversy over Gauthier's hit, as some have suggested that his elbow never came out when hitting Gorges.

Technically, yes, Gauthier's elbow remained tucked to his side, but with the combined force of impact of the elbow and shoulder, and the speed in which it was executed, there is little doubt as to the intent. Gauthier threw himself into the hit in an uninhibidly enthusiastic manner, leaving his feet to make contact.

It was an immediate decision, and an easy one for officials: five and a game.

What wasn't immediate, was the reactions of Canadiens players on the ice. None of Andrei Markov, Andrei Kostitsyn, or Tomas Plekanec came to Gorges defense. You have the right to remain unsurprised.

What is surprising, is that the Canadiens player with the best view of the trainwreck, was Guillaume Latendresse, and he did nothing as well, which is despicable. Latendresse, a player of size to measure well against Gauthier should have taken him on heartily. His explanation for not doing so should be known. It better be a good one.

On a club where team spirit is currently in question in certain quarters, it is on occasions such as this that players show whether they are a united group or not.

Do you think that the Boston Bruins players, upon seeing this, did not take notice?

The Bruins will run the Canadiens out of the rink this afternoon.

Gorges, full credit to his gutsyness returned to play for a few shifts, but evidently was not himself.

The Canadiens called up defenseman Alex Henry from the Hamilton Bulldogs for today's game.

Here are two clips of the Gauthier hit on Gorges.