Experiencing A Canadiens' Win In Ottawa's (Not So) Rival Rink

Share All sharing options for: Experiencing A Canadiens' Win In Ottawa's (Not So) Rival Rink 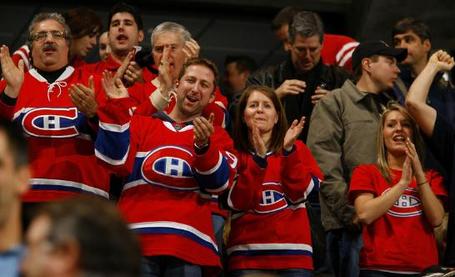 It's was early Wednesday morning as I began this, a snowstorm between Ottawa and Montreal, a total whiteout, and it has kept me home from my real world job, which today would have seen me venture back up to the capital city, dropping off Oldtimers Hockey Challenge tickets from Orleans to Kanata.

The Canadiens third straight victory, five days into the beginning of their second century, featured a storm of sorts, in that a barrage of shots were fielded by surprise starter Jaroslav Halak, the game's well deserved first star.

The whiteout alludes to Habs' forward Ryan White, called up from Hamilton earlier in the day, only to play four shifts last night, before somehow being declared ineligible for the game, something to do with the Canadiens failing to declare the callup with NHL sources.

With the Habs playing well of late, with back to back wins against the Bruins and Flyers no less, I was real anxious to experience seeing them in Ottawa, where a great multitude of Canadiens fans reside. I've watched Montreal at the Civic Center Palladium Corel Center Scotiabank Place before and seen their fans turn out in droves, but actually being there among them, as I've found out, is a whole other reality. 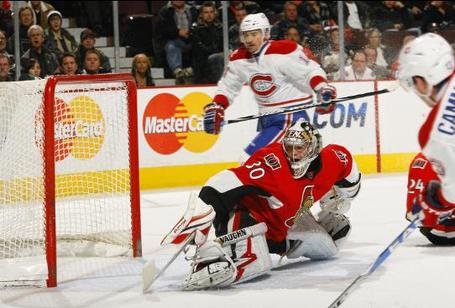 I won't suggest that the Habs' fans outnumber, or are louder than their Senators fan counterparts, but it is a pretty evenly split room. Together the two sides help bring up the ante and charge up the tempo. From the cheapseats, it's a lively atmosphere, to put it lightly.

Sitting next to a Sens' fan that looked like Ken Hitchcock after dropping 200 pounds, I got on his good side really early by mocking the Senators division title banners just before the drop of the puck. During the game, I further endeared myself to him, all in good fun of course, by pointing out the mass of empty seats in the building and noting everytime a Senators shot was blocked but still registered on the clock count.

His subtle shots directed back to me were almost whispered comments to his friend and they included calling out every Habs player fall as a dive, saying "We're totally dominating" about a dozen times, and suggesting goalie Jaroslav Halak looked nervous while completely stoning Ottawa all game long.

Among the Canadiens fans scattered in Section 323 were a group of Habs Inside Out loyalists along for a mini Habs Fan Summit. Dave Finn (Punkster) was seated next to me. A converted Leafs' fan, Dave is an asute observer of the game, and he spent the evening pointing out all kinds of subtle and interesting game notes to me. It was a pleasure spending time with him. 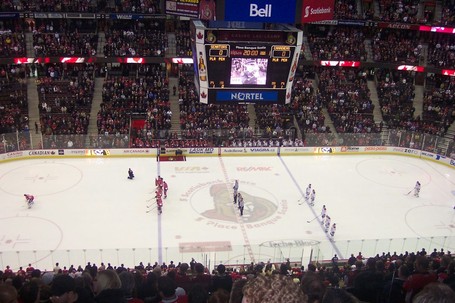 A few seats away were Chuck Lewis and his girl and Adam Mills (subdoxastic), who's been a commenter at EOTP for a long while now. Other HIOers within reach were Paul Dube (who did a fine job organizing the trip and bringing everyone together), Ian Cobb (who's done the same for two Montreal fan summits now), Dave (DD) Reid, Nate Boisvenue (Natrous) and his brother. Pretty much the entire group had a Sens fans seated next to them.

One good laugh I had was watching Ian, donning his now traditional 1945-46 classic home white jersey, attempting to convince the Senator fans next to him to come over to the Canadiens' side.

The coolest part of being mixed in with the Ottawa fans was leaning over them three times as we'd all high five each other when the Habs scored. We would have had to a fourth time, but by then, all the Sens fans had left to beat the 417 rush home.

One treat of a fan was this guy a couple of rows down from me. Wearing a Marian Hossa jersey, he literally castigated Kovalev at every opportunity. He was in absolute angst each time Kovy hit the ice, yelling "Do something, lazy ass!" and a bunch other obscenities. Kovalev was roundly booed on the evening, a composite hounding from both sides as he floated through the game. I noted to Dave that most of the game, I wasn't even aware he was on the ice.

Overall, the sense I got from Senator supporters is that they are an inhibited bunch among the Habs throng. The "Ole, Ole" chant was omnipresent, from the busride in, to the corridors and throughout the game, and to the tunneling out post game back to the bus. 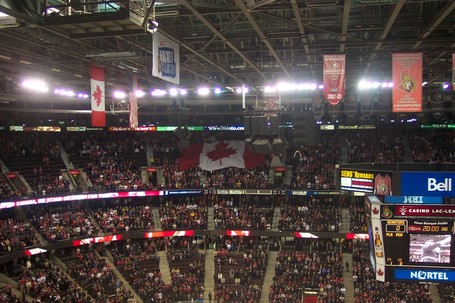 I was standing in a lineup between the second and third and overheard a snippet of conversation involving a guy with a Carey Price jersey and a man in unidentified colours.

"Who are you going for?" he was asked. "Nevermind," he wilted.

The guy in the Price jersey turned to him friend and they simultaneously nodded "Sens fan!"

One thing I found particularly lame, was when the Canadiens scored, the public address practically mumbled the details as if to neuter the cheering. It caught me off guard, it was so minor league. I was all pumped to scream my head off, and that monotone drone just threw me for a loop.

Late in the contest, when the attendance was announced at eighteen thousand and something, I had to cry "bullshit." The bozos next to me tried to get my ire by mockingly counting the empty seats. My retort was a simple "Wonder how empty this place looks when it's not the Habs playing?" 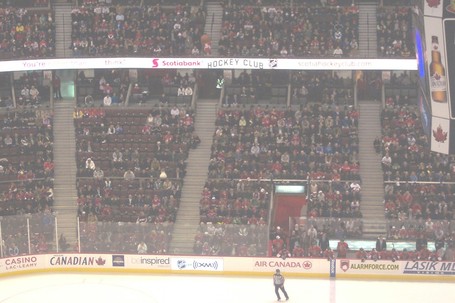 Scotiabank Place is indeed an old time hockey experience. The musical selections between drops of the puck keep on entertained and amused. For one stoppage we got 30 seconds of the Ramones' "Blitzkrieg Bop", and for the next we got some cheesy farfisa pump organ playing the "Charge" interlude. You can't help picture a Monty Python skit while listening.

As for the game itself, the Canadiens, backed by a standout performance from Halak, put in a pretty solid road game. The shot margin was high, especially after losing defenseman Jaroslav Spacek at the end of the first. From high up you could see that the Senators were firing from all angles but rarely piercing the perimeter. 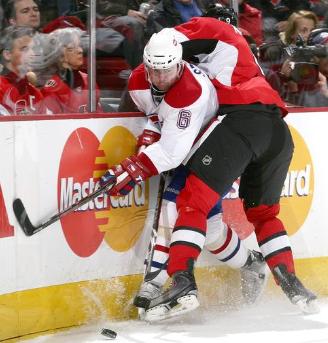 The Canadiens made the most of their chances. Mike Cammalleri's goal was a beaut! On the two on one, Tomas Plekanec put a fake on the Sens defender that was a true marvel. The blueliner's stick was properly placed between Plekanec and his winger until a shot was faked and a slip pass made. As the Ottawa rearguard moved his stick to deflect, the pass went the other way. All the streaking Cammalleri had to do was redirect it into the open cage.

Sitting high offers a view in which you can truly appreciate the hardest working players and spot the floaters with ease. The most notable things I took in were how aware Roman Hamrlik is of his surroundings when not in possesion of the puck. You can really begin to understand why there are so few mistakes made from his corner when he does come in contact with the puck or opposing players.

On the Ottawa side, it's clear that Kovalev's teammates haven't a clue what he's about yet. He spent the night eluding any kind of close check, skating arcs and circles outside the perimeter of play. When oportunity arose, he'd streak towards the net from the far board, but linemates weren't looking for him. It gives the impression that he's floating, but that type of evasiveness has always been part of his game. He'd didn't accomplish very much on the night.

I never had much good to say about Jason Spezza and this game didn't change that. As the Senators fell behind, you'd think the team's most talented center would be leading the charge, but I caught Spezza waiting at the Habs blueline for a pass at least four times - in the third period alone.

Another noticable feature of the rink at Scotiabank Place was that the dasher boards are dead. The puck isn't given much bounce when fired off them, which tends to favor a Senators forecheck. The backs of Canadiens defensemen were constantly offered as targets to onrushing Sens forwards. Curiously, Halak rarely got back quick enough to stop the wraparound shoot ins Ottawa employment to break into the zone.

Much credit for the win went to first star Halak, but the work of the penalty killing unit was without fault on seven occasions. A player who is rapidly changing my opinion of him is Hal Gill, who was a tower of strength with a man down. Gill's long stick is always perfectly placed, and after he had broken up a good half dozen plays, the Senators forwards began working away from him as he had completely neutralized any cross ice passed from his side of the rink. 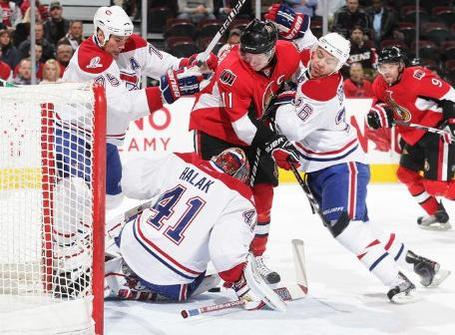 There was about five minutes to go in the game when fans started for the gate. I couldn't believe my eyes that people were hitting the exit in a one goal game. The moment the Kostitsyn goal was scored, it was as if the finger was removed from the hole in the dam and a deluge ensued. By the time of Scott Gomez' empty netter, the rink was half empty, nothing left but the Habs' faithful.

That final scene - about 9,000 Habs fans cheering in a rival rink - is my lasting image of this game. I'd head back to Ottawa and do this all over again in a nanosecond.

If anyone is thinking of heading to Ottawa for the December 28 game, there were all kinds of seats available. If you have a hunch of going, do so. I was seated at the 300 level near the blueline, and the sightlines for the whole rink are great.

Kudos to Paul Dube for organizing this fun get together. If you should ever take in a game in the capital, do as Paul did and get everyone together at Local Heroes on St. Laurent Blvd. From there, they have nightly round bus trips to Scotiabank and back for only five bucks.