Is Canadiens' Tomas Plekanec A Legitimate Number One Center?

Share All sharing options for: Is Canadiens' Tomas Plekanec A Legitimate Number One Center? 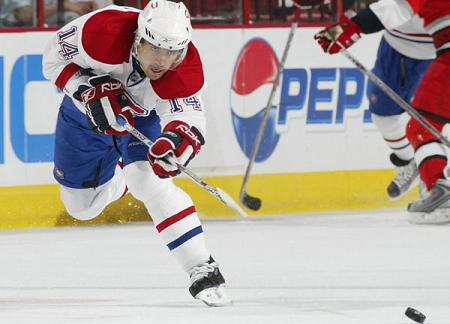 A couple of quick thoughts before I head off to Ottawa for tonight's game against the Senators concerning Habs center Tomas Plekanec.

After repeatedly watching highlights of last night's game against the Flyers, it started to really catch my eye when they showed replays of Andrei Kostitsyn's goal. On the play, Plekanec was poised behind the Flyers goal, looking for someone to feed a pass to. Simultaneously, Kostitsyn found the slot just as a Flyers' defender approached, and Plekanec saucered a short eight foot pass over the defender's stick for Kostitsyn to essentially bat a blooper into the net.

On RDS, Benoit Brunet termed the play Gretzky-like, which is always a stretch.

Once I had seen it over again, on a closeup, it's apparent what a smart play it was. It tied the game up, and sent the Habs off to victory.

In Montreal, it's been ballyhood since forever that the team has not had a legitimate number center for ages. Saku Koivu didn't quite fit the description, and Scott Gomez definitely ain't it.

So what exactly would be the criteria for a top line or number one center?

Plekanec's play this season has gotten me thinking about this. Being that there are 30 teams in the league, hence there should be theoretically 30 number one centers. Of course, that all sounds a little too round numbered for me.

I thought I would look at today's current NHL stats to see where he fits in and what I found is quite revealing.

Plekanec is 25th in the league in scoring, and 13th among centers.

Sounds like a top line center to me. What do you folks think?

Update: With 3 assists against Ottawa, Plekanec is now 16th in league scoring, 10th among centers for points, and his 25 assists place him fourth overall, tied with Nicklas Lidstrom. 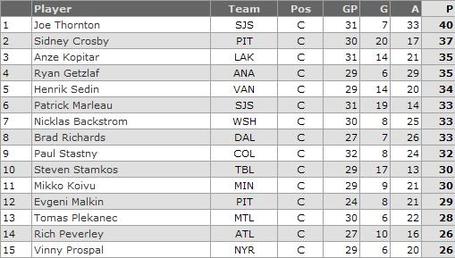 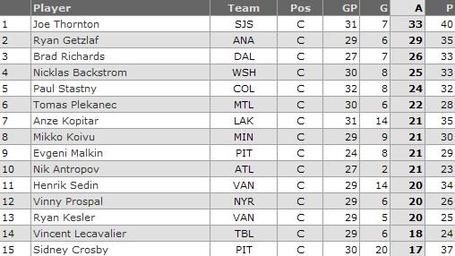