Sominex, The First Star, As Canadiens Down Flyers

Share All sharing options for: Sominex, The First Star, As Canadiens Down Flyers 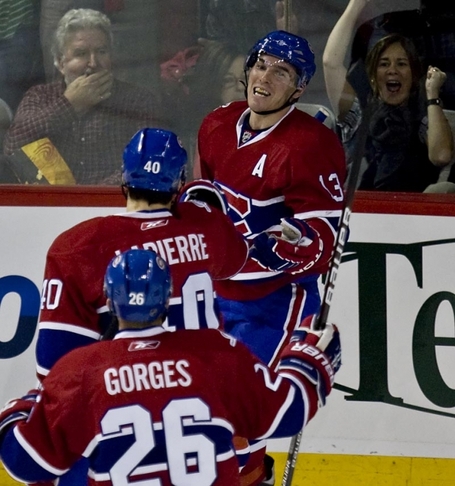 I thought that the Canadiens through the first 30 games of the season were lacking identity, but having seen the Flyers mess I feel just a little better.

It wasn't a grand game by any stretch that the teams played on Monday. It was an uninspired Philadelphia team that the Canadiens beat but a win is a win is a win, as they say.

For a while it seemed like the game was at best destined to set a record for the least shots on goal by two teams in one game, which is remarkable in a way, considering the composition of the teams.

The yawnfest was an anti-classic brought to life by some glaring mistakes (Gomez, Andrei) on the Canadiens side and some lame goaltending by Brian Boucher on the Philly side. Boucher allowed 3 goals on thirteen shots, the same as he did on Saturday after releiving Ray Emery. That's hardly what the Flyers are hoping for in the search for consistent goaltending. 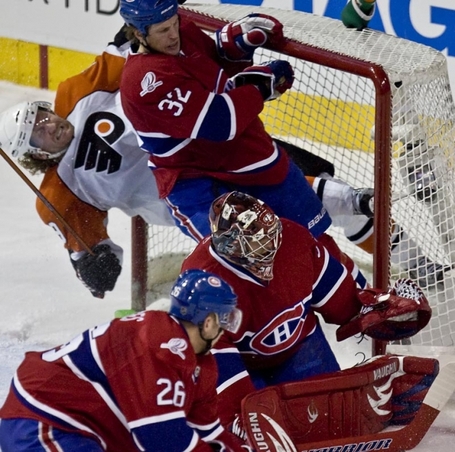 Carey Price only needed to be solid, not spectacular for the Canadiens. Daniel Briere, on a breakaway in which he seemed to be hogtied and floored, was the only Flyer to beat Price. If the Canadiens' goalie appeared to be surprised by the shot that eluded him, it testified to the strange nature of the goal.

Boucher, at the other end, was beaten by an Andrei Kostitsyn flutterball, after a nice feed to the slot from Tomas Plekanec.

The game had one veritable highlight, one of those ultra rare two on ones the Canadiens generally fail to complete. On the play, Maxim Lapierre retrieved a loose puck from inside the Canadiens blue line and broke away with Mike Cammalleri dashing to the net. Holding onto the puck just long enough for Flyers' defenseman Braydon Coburn to commit himself with a flat on the stomach cross slide, Lapierre pulled back and hesitated a second before handing a perfect feed to an open Cammalleri.

A power play blast from the point by Marc-Andre Bergeron made the score 3-1 midway through the third.

That pretty much sums up the game, one that needed to be watched upright for the most part. 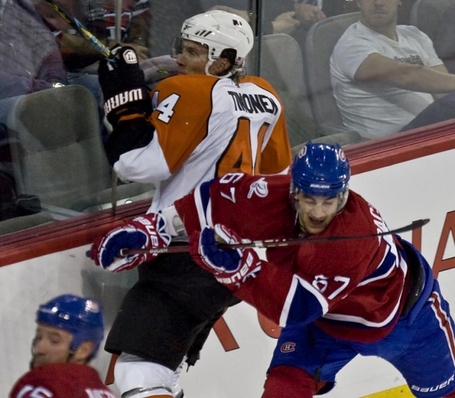 Some notable stats from the game...

The Canadiens had 8 missed shots and 11 blocked.

Ten Habs failed to get a shot on goal.

The line on Scott Gomez for the game: No shots on goal, no shots missed, none blocked, 2 hits given, 1 giveaway (flagrant, and I saw more than one!) , 3 blocked shots, 6-5 in the faceoff circle and about $43,712.00 wasted from the Canadiens payroll.

Max Pacioretty lead the team with three shots on goal, 2 blocked, 2 misses and four hits - all team highs on the night.

The Canadiens blocked 27 shots during the game. Other than the 3 by Gomez, there were 3 blocked by Lapierre, 2 each for Spacek and Bergeron, 1 for Plekanec, Mara, D' Agostini and Gill.

Oh yeah, and Roman Hamrlik blocked another 10 himself. Whoa!

I'm heading to Ottawa tonight to take in the Canadiens in the nation's capital. This is the first time I see the Habs play somewhere other than the Forum and the Bell. Much thanks and appreciation to Kevin van Steendelar of Ya! The Habs Rule for the tix. I promise to yell "Sens Suck! at least a dozen times in his honour!

This should be cool and I should will take some pictures. Can't wait to see all the Habs fans there!

If any Sens fans want to visit, slap me for making fun of Bryan Murray or diss me for pissing all over Spezza since forever, I'll be in section 323 with a can of mace.