With Latendresse Set To Haunt, Habs Might As Well Have Trucked Him To Philly

Share All sharing options for: With Latendresse Set To Haunt, Habs Might As Well Have Trucked Him To Philly 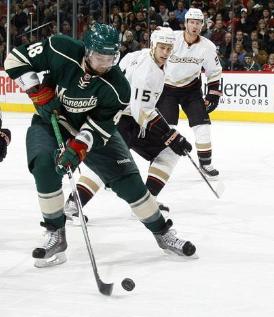 Maybe a better deal could have been had, maybe not. But so far the Guillaume Latendresse to Minnesota for Benoit Pouliot is looking like a real stiffer in the making.

Can Pouliot, who has rarely been seen at all so far in the team environment, not to mention game action because of injury, handle the Montreal pressure? He hasn't handled the more minimal pressure of being a high pick thus far, and with Latendresse panning out well with the Wild, can he meet any sort of expectations the Canadiens have in him?

This whole deal, with centennial festivities, has flown under the radar quite well for now, except perhaps for what Guillaume is now doing.

In five games, Latendresse has 2 goals and an assist, with a shootout game winner, equalling his Montreal stats totalled during 23 games.

You see, I've always strongly believed that there was something to Latendresse. Many have criticized him for a bunch of sins and shortcomings, but I've stuck to judging him whenever his role was defined and his linemates regular for a game or three.

And truly, that is when a player is best and most honestly assessed.

Look at Max Pacioretty as he blooms, having played most of the season with veterans Glen Metropolit and Travis Moen.

In Montreal, Lats was judged as being slow of foot, hesitant and lost, playing with fourth line compadres that shuffled for every game. Heck, how often was he given that chance to refind the sparks he'd developed last season with Maxim Lapierre?

Speculation was such that coach Martin and Latendresse did not see eye to eye on matters. After developing a young prospect for four seasons, it is owed to that player that his concerns and reasons for not being more productive be listened to. The player has been put through the ringer, where's the coaches patience?

So now, they get Pouliot, who may have similar issues, and are starting back at zero. With Latendresse, and four years of learning out the window, what's the use?

Could the Canadiens not have held on and gotten someone with more NHL experience for Guillaume's 232 games than Pouliot, whose only played 65 through four seasons.?

How about the Philadelphia Flyer's Claude Giroux, whose on a steady upward curve? 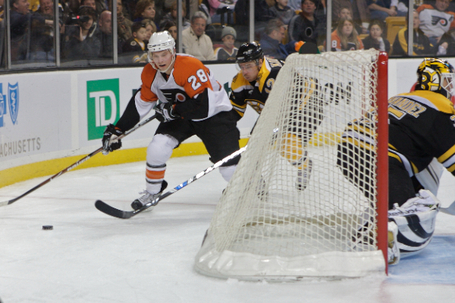 Latendresse would have fit in nicely with the Flyers, or would the John Leclair flashbacks have been too scary? Guillaume would have been their type of player, very much in the Tim Kerr mode.

The Flyers, who have been spinning their wheels of late, might have opted for such a shakeup rather than canning their coach.

Such a potential trade could have been sprinkled with a future consideration clause on both sides, based upon 2009 to 2011 production, with draft picks in the balance.

The Habs could also have gotten their mits on Daniel Briere as well, alleviating a million bucks a season over a five year term off the Flyers payroll in the process, by offering up Scott Gomez. I'm not a big Briere booster, but I see him as having more upside in a role with Montreal than Gomez at present.

The Canadiens, who have just parted with two top draft picks in recent weeks, would have looked better coming out of the deal than they do now.