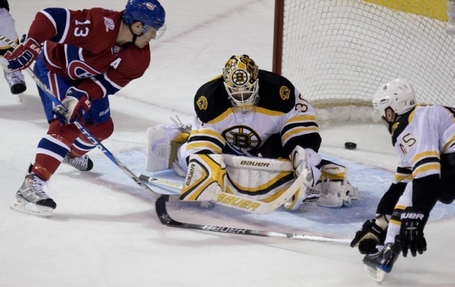 As it turned out, it was one of those games, and one of those days, that a fan could watch over and over, and relive many times again.

Like many of you, I watched much of the televison coverage and centennial tributes in the hours leading up to the game. Indulging in the Canadiens history will always be a riveting experience, and it is these moments that we as fans are reminded why it is so hard to separate past and present.

Perhaps it cannot be explained to fans of other teams. Maybe Leafs fans in the fifties and sixties can relate, but when watching reel upon reel of memories stream by, it's hard to remain unmoved. Your youth is flashing before your eyes, great times being relived.

I explained this to my kid, and you've maybe done this too, that I watched the Canadiens win the Cup for the first time when I was seven, and it made me interested in hockey. I saw them win again at age nine and eleven. During my four years of high school, the Habs won every year. I'm not sure if that experience can be conveyed to anyone who hasn't experienced the exact same thing.

But of course, the present is always in play. A successful past is a constant reminder of how things should be done right, a brutal loss to the Buffalo Sabres the night before is a wake up call, whose alarm sounds alert that the 2009-10 edition of the Habs are not the 1970's dynasty.

The scenario for the centennial game, the celebration to literally end all celebrations, had arrived at a very defining time.

Honestly, things looked bleak with the Canadiens riding a four game losing streak. A loss to Boston in the centennial game held the promise of things turning terribly ugly on the ice and in the stands. Blow this one, atop the stage of all stages, and the repercussions for the Canadiens seasons were scary proposition.

All day long, mixed in with visions of Stanley Cup triumphs, was a gnawing premonition that in a few hours, the Canadiens would be booed leaving the ice. Elongated pre-game celebrations tend to bring out the worst in the home team, and combined with a game the evening before in which the Habs were seemingly already at their worst, it appeared a script of doom was carved in stone.

By the middle of the afternoon, the centennial pre-game ceremonies were still a mystery. Little had been revealed as to how the Canadiens organization planned to celebrate the landmark. Soon, news came that the festivities would involve the retirement of Elmer Lach and Butch Bouchard's jersey numers. 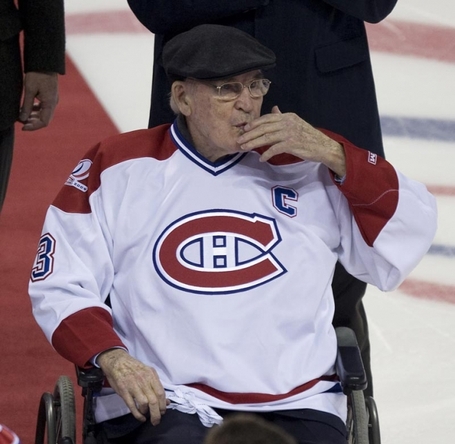 High time, I thought, for the Habs two oldest warriors to receive their due.

Former broadcasters Dick Irvin and Richard Garneau give a crash course in Habs history 101 as clips on the big screen played Peter Gabriel's "Salsbury Hill" and U2's "I Still Haven't Found What I'm Looking For". Owners, coaches, managers and players who have departed, are listed through the strains of George Harrison's "My Sweet Lord". The first image is of J. Ambrose O'Brien, who found the club in 1909, and last two images are of Newsy Lalonde, the team's first Flying Frenchman, and Maurice "Rocket" Richard, its most heralded.

Intrigue soon grasped imagination, as I sat watching the procedings. I was captivated by the image of former long time Canadiens trainer Eddy Palchuk dropping buckets of pucks on the ice.

As an intro to a very special evening, such iconic subtlety had the desired effect. I can only imagine that fans inside the Bell felt their hearts swell when Patrick Roy, in full goalie gear, first stepped onto the ice.

I, myself, could not believe my eyes!

What came next tugged at heartstrings, as former Habs players, from legends to role players, strode out onto the ice, unnanounced. The images were jolting.

How better to celebtrate and summarize a glorious 100 years than with the actors who made it happen?

Ken Dryden, who had not worn goalie equipement since his last game on May 18, 1979 donned for goalie gear and joined the skate.

The oldtimers were in the pre-game warmup, passing the torch to today's players. Subtle, it didn't require an explanantion!

Current Habs soon joined in, and additional oldtimers and coaches were all introduced to the crowd. This is what the Canadiens do better than anyone else, they do not forget their heritage. In savouring it, they pass it on, reminding us all of the players in the play.

This is Doug Jarvis, NHL ironman....

This is Yvon Lambert, who scored the game winning goal in... 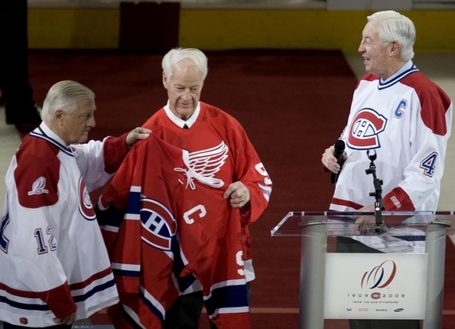 Lach and Bouchard, who only found out in the realy afternnon that their jerseys would be retired as part of the festivities who brought out, treumpeted and feted. All gathered for a team picture that summed up a hundred seasons of glory.

There wasn't a burning torch to be seen, but in each of the multitude of players gathered, there were many still burning on this night. A subtle message, loud and clear.

Between the end of the ceremonies and the start of the game, it was later learned that one current Canadiens player made it a point to meet each of the past Habs legends and shake their hand. 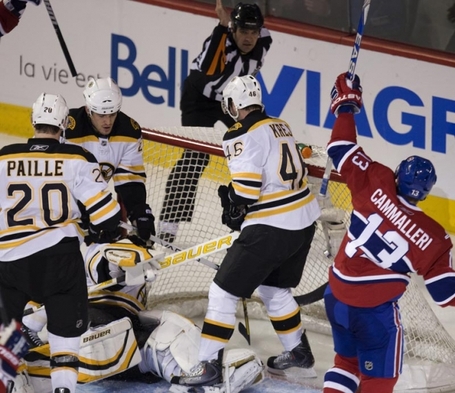 As the game began, it was figured that the Canadiens would come out firing, and that if the Bruins were able to hold off an initial onslaught, they would be well placed to conquer.

It never came to be.

The Canadiens came out guns a-blazing, and it seemed that if they could only grab the lead early, scoring first for a change, the boost and the crowd would provide the needed lift.

Awarded a rare first powerplay six minutes in, the Habs were poised to convert early momentum into the man advantage and grab the lead, when the Bruins' Marco Sturm stripped the puck off a comprised Andrei Kostitsyn to break in alone on Carey Price. A Boston shorthanded goal early on would have been deadly, but Price came up big, kicking a leg out lying on his stomach to make the save. 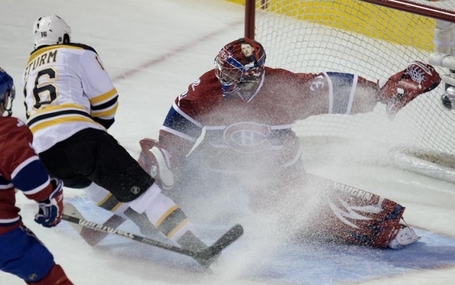 It proved to be a first turning point, and defenseman Jaroslav Spacek, with Max Pacioretty screening from the crease, made it 1-0 Habs, four seconds after the Bruins penalty expired.

The lead held up while Boston fought back. A little over five minutes into the second period, Maxim Lapierre and Spacek were sent off simultaneously, giving Boston a two minute 5 on 3.

The kill turned out to be turning point number 2, as the Canadiens went up by a pair on Cammalleri's first of the game, 45 seconds after the penalties expired.

The blow took all wind out of the Bruins, as Montreal went on to a second period in which they would score four goals in a 9:19 span, essentially putting the game away.

Cammalleri's second hat trick of the season, combined with former Bruin Glen Metroploit's sixth of the year sealed the deal on this game before the second period siren sounded. 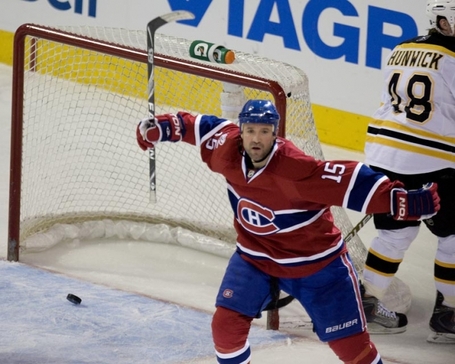