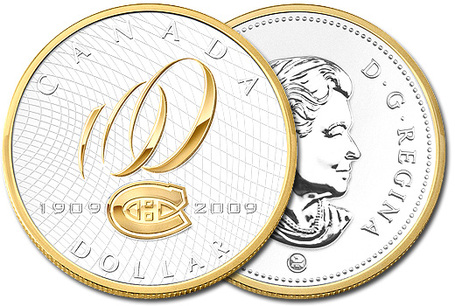 A toast, to 100 seasons of hockey, and 100 years of the Montreal Canadiens!

In an ideal Hab's fans world, the current edition of the Montreal Canadiens would be leading the league and poised for victory, with their eyes firmly focused on the prize.

That they are not, is hardly a reason not to celebrate this most glorious of birthdays.

Think about it. The Montreal Canadiens franchise, through trial and error, ups and downs, firsts and hurts, have practically defined the history of the game of hockey along the course of their 100 year existance.

It's an unavoidable truth. One every fan of the game should relish and take an interest in.

A friend of mine, not a Canadiens fan, once put it this way:

"The Canadiens are the Elvis of hockey. They broke barriers and lead the way. They helped popularize and spead the game, and every fan of the game is in their debt, whether they recognize it or not. Like Presley, the Canadiens wrote the book and established all the benchmarks along the way. Just like the King, they managed in the course of their lifetime, to do everything possible, perfectly right and absolutely wrong. That's no mean feat. Just like Elvis, right or wrong, the Canadiens wrote the book."

The words of my old pal had a profound effect on me, when he rendered that opinion, sometime back around 1986, as the Habs were set to win their 23rd Stanley Cup. They stayed with me.

You could say, upon hearing such an observation, that I was all shook up. The Habs may now be nothin' but a houndog, but don't be cruel. If you can't help falling in love with hockey, it would only respectful that you would some sense of appreciation for what the Canadiens have done for the game.

For those of you insatiable Habs fans, not able to get enough of this centennial celebration stuff (hey, we know you are out there!), here's a chance to lose yourself in the great history of the game and of the team itself.

I've often thought about what is best about the Canadiens centennial celebrations, as in many quarters, the opinion is that the Habs have overdone the festivities with uncharacteristic overkill.

True enough, but talking to a young relative of mine, he was absolutely eating it up. With all this Habs and hockey history coming at him, he was being given a crash course in Hockey 101.

I was planning to lay a little low, being not quite in the mood for such celebratory things, but after our conversation, it conked me on the noggin that it is for fans such as he, that all this is for.

Now with all of the above in mind, I took a scoop and dug in, trying to come up with as much interesting pieces as possible.

In the history of the hockey club, there have been 24 Stanley Cups conquests, some near misses, and some defining times. Too many events to list per se, so that is why these offerings are but a scoop, or if you will, a random slice of some of the best piece written here, along with personal favorites.

Late yesterday, I re-posted older articles on the Canadiens' first game and season, along with a video clip tribute to some peak times in Habs' history. You can scroll down and have a look.

Later today, there are two pieces that have been in the works courtesy of Chris (Wamsley) Boyle that may find their way to the main page. Chris has been bustin' it to get up a list of his 100 favorite Habs' games. I've had a glimpse, and it looks to be a real treat!

Passing The Torch From A Trivial 99 To A Pivotal 33

Joe Malone May Have Saved The Habs From Extinction In 1918

Ten Habs Centennial Items You Might Never See (But Wouldn't They Be Cool!)

Nevermind Gomez and Koivu, The First Canadiens Language Crisis Was Long Ago Ignited By "Rocket" Power

The Origin Of The "Habitants" Term

Among the bases covered by Joe are the Canadiens first game on January 5, 1909, a who's better, who's best on Richard vs. Beliveau, the Top 10 Habs books and a visual presentation of rarer Habs books, in addition to the profiles of well over 100 Montreal Canadiens greats.

Lions In Winter have gone all out and listed the top Canadiens by decade. It is killer, essential read stuff, and I wish a had thought of this! Actually I had, except they took it on like Mario Tremblay in the corner while I sat back like Scott Gomez with eggs in my pocket. Kudos to Lions for endeavoring to take on an original idea and see it through.

Kevin Van Steendelar at Ya! The Habs Rule! has been offering a crash course in Habs history for some weeks now, going so far as to offer prizes to participants via a 12 days of Habs trivia contest.

Two notable inclusions into his Habs' history cannon are his look back on when the Forum first opened its doors and goalie Georges Vezina's last game.

As the birthday goes on, I'll be adding more links as I find them. Readers can feel free to add their favorites among the comments, and I will post them here among what ought to be multitudes.

The Habs are who we are - The Globe and Mail