Curios From The Canadiens' First Ever Game And Season

Share All sharing options for: Curios From The Canadiens' First Ever Game And Season 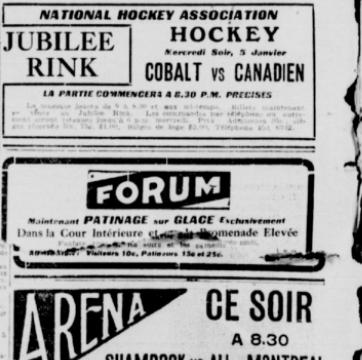 This is page 2 from La Patrie on January 5, 1910. It contains among other things, an ad for that night's Canadiens debut., an article concerning the Didier Pitre case, an ad for skating at the Forum, and an ad for a CHA contest between the Montreal Shamrock and All - Montreal. The publicity generated by the Pitre ruling assured that the Canadiens game drew larger crowds than the one at the Westmount arena, despite the latter having double the capacity.

In the bottom left hand corner, you can see the Canadiens 11 player post card promo, that is the most commonly known artifact from the 1909-10 season. Of the players, only nine would dress for the team that season, with the remaining spares never to play for the Canadiens. 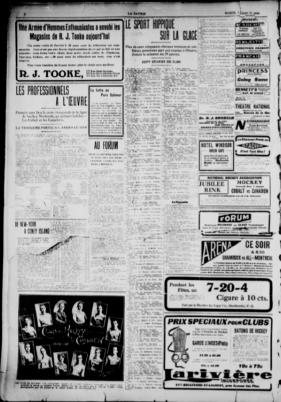 The NHA Canadiens and the CHA Montreal National were involved in a very high profile court case involving the playing rights of point man Didier Pitre. The case was resolved just hours before game time, allowing Pitre to suit for the team of his choice. Pitre had signed to play with Le National, but then accepted more monet from Le Canadien. The judge in the case decreed that no man can be held to work for an employer against his wishes. Would Dany Heatley love to live in these simpler times. 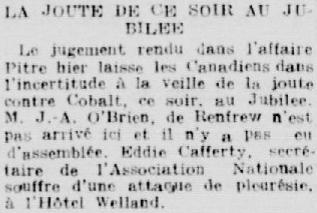 The headline below reads: "Canadiens win debut, in a lively incident filled game". The one above states that 3000 frienzied fans greeted captain Jack Laviolette and team mates. 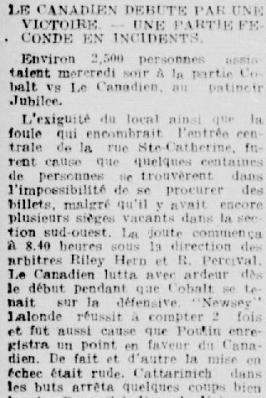 Hundreds of fans were left waiting outside by game time, with the event being sold out.

The game began at 8:40 and the official were rivals NHA players Riley Hern and B. Percival.

The Canadiens began the game very much on the offensive, while Cobalt held up defensively.

Newsy Lalonde scored the game's first goal, set up the second by Poulin, and scored the third.

The hitting and body checks were rough and very prominent. 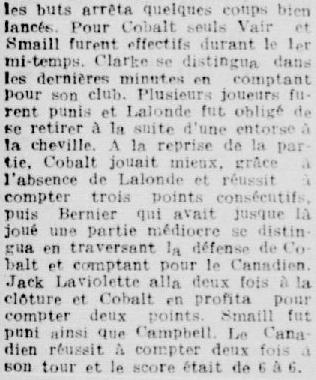 Cattarinich made some keys saves on several hard shots.

Vair and Smaill were the two best players on the Silver Kings in the first half. Clarke distinguished himself in the final seconds of the half to score for Cobalt.

There were several penalties on both sides and Lalonde left the game due to an ankle injury.

Starting in the second half, Cobalt played much better, thanks to Lalonde's absense, and scored three consecutive goals.

Bernier, who had been having a mediocre game up until that point, then scored a nice goal by splitting through the Cobalt defense.

Laviolette was penalized twice, with Cobalt profiting both times to score.

Smaill and Campbell then went off for Cobalt, and the Canadiens scored twice to tie the game at 6. 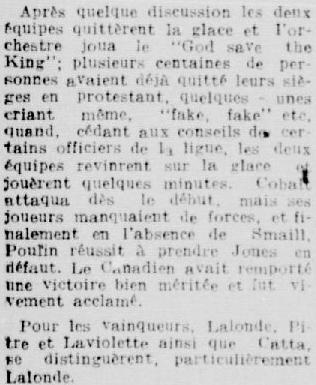 After some discussions at center ice, the two clubs left the surface to the orchestra strains of "God Save The King".

Hundreds of fans had then left their seats, protesting the outcome with cries of "Fake, fake, fake."

Due to the chants, the game officials concurred to restart the contest, and the two teams came back to play.

Cobalt started strong, but were missing Smaill when Poulin managed to beat goalie Jones for the game winner.

The Canadiens had a well earned victory and roundly applauded by the crowd.

For the Canadiens, Lalonde, Pitre, Laviolette and Cattarinich distinguished themselves, particularly Lalonde.

Poulin and Bernier were especially weak at the start, but got better as the game wore on. They were were effective in the second half.

Decarie looked out of place, and often had trouble keeping up with team mates.

For Cobalt, Vair , Smail and Clarke stood out, while McNamara was rather weak on defense as he played despite looking injured. Jones distinguished himself in goal, but Campbell and Kennedy contributed by their weakness to their team's loss.

Campbell was penalized five times during the second half.

During the game, Art Bernier's mother was seriously injured by a mix up along the boards. It would be advisable that administration install some type of protection before another such scrum injures more patrons.

The journalists were also too cramped in their locale, and that is also a situation in need of being remedied. 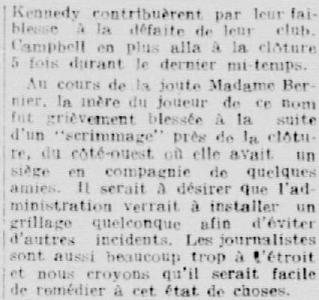 Here is the starting lineup from the Canadiens first game. Jos Cattarinich was in goal with Jack Laviolette at point and Didier Pitre at cover point. The defenseman of the day lined up not side by side, but in an I - formation. The forward line had Ed Decarie at center, with Skinner Poulin on the left and Art Bernier on the right. Newsy Lalonde was at the rover position. Decarie, by all accounts during the season, was hapless and terribly unaccountable defensively. His tenure at center would not last long, and he would often be replaced by Poulin and Lalonde in the game second halves. 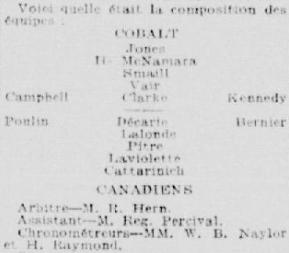 Here is the summary from the Canadiens very first game. Note that teams played two 30 minutes periods and that goal times related to how much time had elapsed since the last goal or the beginning of the period. Penalty times are equally skewered. 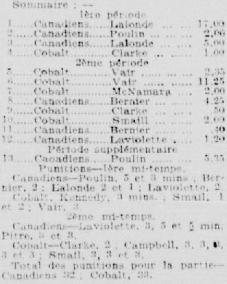 The Canadiens accepted a friendly game challenge from an amateur hockey team from Chicoutimi on February 19, 1910 and the meeting would alter Canadiens history from the following season on. Only 4 Canadiens regulars participated - Captain Jack Laviolette, Didier Pitre, Ed Decarie and goalie Teddy Groulx. Patsy Seguin had been signed on after Newsy Lalonde was released and Montreal filled out their lineup with the Wanderers Moose Johnson and Marty Walsh. No penalties were called in the entire match, but the story of the game was the goaltending of Chicoutimi's Georges Vezina, who stoned Montreal despite being badly out shot. Montreal manager Jos Cattarinich made it his task to sign Vezina the following season, going so far as to keeping his brother Pierre on the Canadiens taxi squad. Chicoutimi won the game 11 to 5. 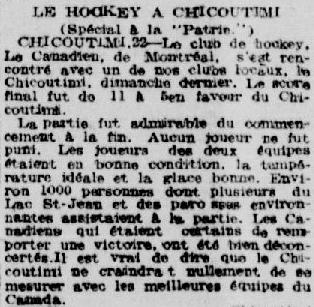 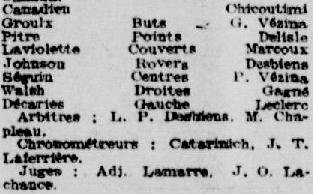 With the Canadiens doing so badly in their inaugural season, there were persistant rumours that as many as four players would be signed from the Chicoutimi HC by Montreal. This first rumour spoke to the notion that the Canadiens would be releasing most of their high salaried players to be replaced by those on the strongest amateur club in Quebec. The additions never materialized, save for the signing of Georges Vezina in December of 1910. 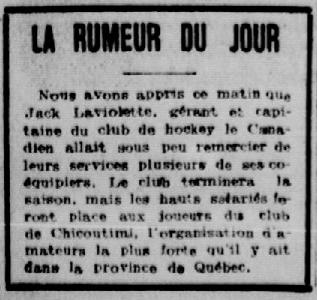 Newsy Lalonde's final game of the season with Renfrew Millionaires. Before the contest he reportedly asked his team mates Lester and Frank Patrick as well as Cyclone Taylor to feed him the puck as often as possible in order for him to clinch the scoring title. Fans at the game said they never witnessed such a frienzied and skilled display of passing. In thinking of the credit due all linemates for setting up triggerman Lalonde, Frank Patrick later developed the idea to credit assists, which he did as president of the Pacific Coast Hockey League starting in 1911-12. Lalonde finished with 38 goals in 11 games, including 22 in his last five games after being signed by Renfrew. 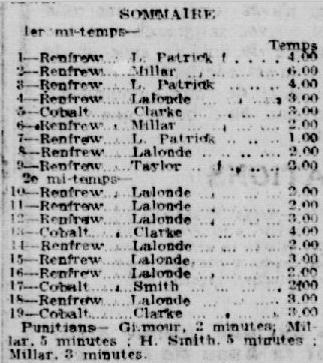