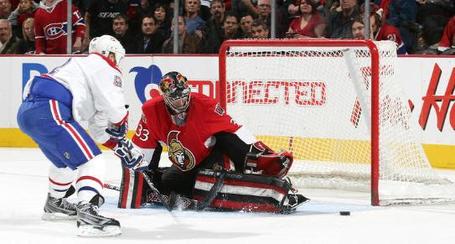 Some hockey games leave you with a feeling of bemusement. Others simply leave you wistful, in twisted wonderment. There are those that may leave you frustrated, shaking your head, scratching it, and talking to yourself, yelling at the tube, players, refs, your cat and anything with or without ears. It does hardly matter that none of the intented targets are within an audible distance.

Some hockey games are downright maddening and this one should leave you nothing but angry at the result and effort.

It's two hours after the game as I type, and I am still in disbelief, the loud kind.

Five thoughts overheard following the game really nag: That the Canadiens played their best game of the road trip, that the Senators wrestled the win away from Montreal after falling behind 2-0, and that the officiating was brutally one sided. That Pascal Leclaire (sounds like a foufou perfume, don't it?) stymied the Habs, pulling off Halakian heroics. That the busy month and compressed schedule had the Canadiens tiring as the game went on.

Screw that! This game was worth four standing points in theory, and it was blown, badly.

The Canadiens played one period of competitive, go for broke hockey.

They practically handed the game to Ottawa a shift at a time starting on the middle of the first period.

The officials weren't great, but one thing you can be sure they witnessed was Canadiens players taking a night off.

Leclair was okay, but after two goals the Canadiens made it easier on him because he rarely had a second shot to worry about. Why Gomez doesn't shoot on his breakaway, or allow the trailing SK in on the play with loads of time, baffles. On Pouliot's break, the kid got anxious and shot way too soon. Those were turning points. Agonizing ones.

Every team is in the same situation schedule wise. 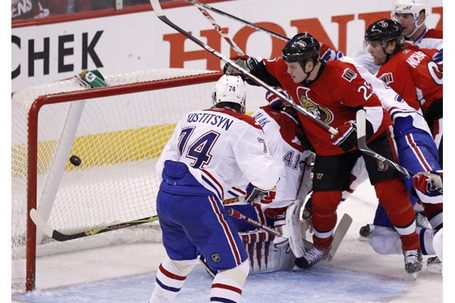 During his second period game analysis, RDS' Joel Bouchard got on the telestrator and showed a few sequences were the Canadiens feet moved. They outhustled and outmuscled the Senators in their own end and won numerous puck batlles. Both clips resulted in goals.

Here's the thing. Montreal had Ottawa, playing without Alfredsson, Spezza and Foligno, right where it wanted them. They were up 2-0, the second line was firing on all cylinders, and shots on Jaroslav Halak were coming from harmless areas.

The game, in short, was bagged.

It was then that the Habs began taking shortcuts, cheating, floating, laying back, waiting for pucks, cherrypicking. The scoring chances gained earlier continued for a short spell, but the follow through was absymal. Players went to the net, others cruised the slot, no one fought and won battles where the puck was in play. Gradually, puck possession was handed to Ottawa through sheer laziness or via stat padding greed.

It looked obvious that the Canadiens felt they were in for a walk in the park. Trouble was, the Senators didn't fold. 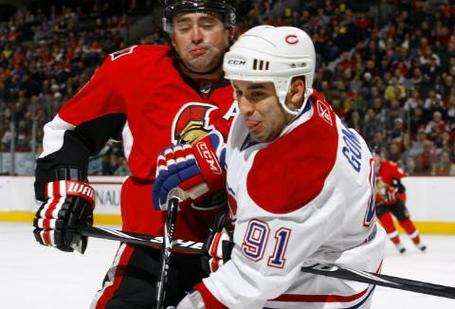 In their own end, on Peter Regin's goal, puck pursuit was nil, as as many as four Canadiens were collapsed around Halak while the Senators scooped up loose pucks like the only team on the ice. The perimeter around the Canadiens net shrunk and closed in, a trait noticable on the first two Ottawa goals.

The Senators second goal highlighted two problems the Canadiens must solve. Winning draws has been a big issue of late, and Ottawa owned the faceoff circle in this one. The stats were brutal. Tomas Plekanec had a hell of an off night, in every way possible. After losing the draw, he simply slid, knees together, to block the point shot. He should have pressured the shooter with an all out stride, stick forward. It looked like a ticket lineup in front of Halak, who only saw the puck once it passed him.

On one sequence in the second period, and I wish Bouchard had shown this one instead, three loose pucks lay waiting for battles the Canadiens didn't even bother to pursue. It was in their own end, and the Habs defenders and forwards simply reacted by positioning themselves and allowing an assault.

A pair of defensemen guilty of coming up lame were Jaroslav Spacek, who's been having all kinds of trouble since losing Roman Hamrlik as a partner, and Hal Gill, who's actually been a very bright spot of late.

Marc - Andre Bergeron had a difficult evening, as the puck always seemed to arrive at him on the dribble. The fault of Bergeron is that he almost always plays the puck instead of the man. Mike Fisher schooled him on the third goal. Andrei Markov also had a rough one, the juice of his excited return now seeming to run low. Both Bergy and Marky lead the suicide pass brigade, and rarely did the risks pay off. 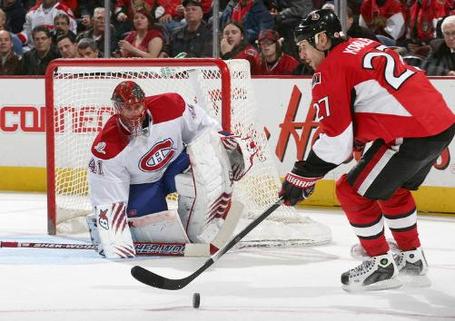 As stated, Plekanec was out of sorts, which is odd considering his line finally had the support of a full out offensive second line with the return of Brian Gionta. Plekanec seemed just a little off in the first period, playing a bit of a perimeter game uncommon in his play this season.

I noticed something odd beginning the second period. With Markov's penalty at 19:00 minutes of the first, Plekanec was in his usual spot during the first minute of the PK. When the second began, there he was again, fulfilling his duty for the first 45 seconds of the penalties final minute. When I next looked for him, he was nowhere to be found. Linemates Mike Cammalleri and Andrei Kostitsyn came out two shifts later centered by Glen Metropolit. Plekanec didn't see ice until the 5:45 mark, which was curious. The broadcast didn't pick up on a reason, but I'm left to wonder if there was an injury somewhere. 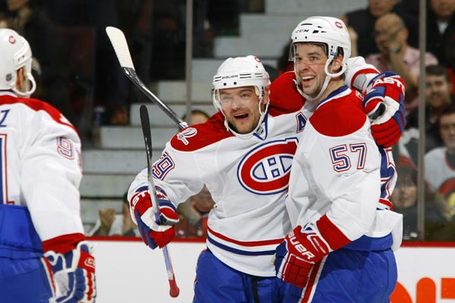 As mentioned, Gionta's return sparked the Scott Gomez line. Especially during the dominant minutes of the first period, the two compadres and Benoit Pouliot gelled like nothing else. Judging by the immediate cohesion, it looked as though the three had been playing together for years. The telepathy between Gomez and Gionta is well known, but Pouliot truly looked to fit in instinctively. In one game, the kid with the Heinz number on his back showed all facets of the package that made him a fourth overall pick. It would be real easy to get overwhelmed by his performance.

A second bright spot in a game of dimming lights was the play of Sergei Kostitsyn, who seemed to treat his fourth line demotion like a promotion of sorts. He reacted with fighting spirit and enthusiam. Truly, he's too talented for such a slotting, but given that it enables him weaker opponents, it should prove beneficial. One thought, a player such as Tom Pyatt, with his speed and grit, would be a better fit than Matt D' Agostini on the fourth line.

Awaiting the Canadiens, are pivotal and tradional season ending Florida suicide trip. Generally, the Canadiens fare terribly there at this time of the season, and anything short of two wins would greatly stain the surprising gains made so far on this two week trek.

Hopefully, Roman Hamrlik will be ready to return. He has been missed big time.

Photos from Habs Inside Out and Montreal Canadiens.com.