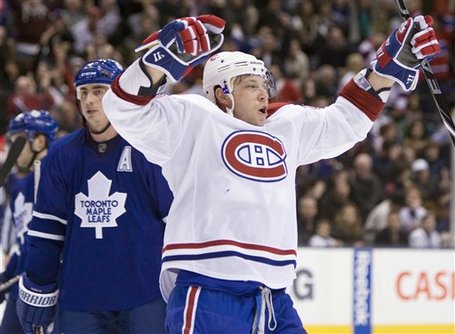 Nine Toronto Maple Leafs had four or more shots on Jaroslav Halak, who has stopped 180 of 186 shots in the first four games of a killer seven game road trip. In all, Toronto had 94 shots directed at Halak (49 on goal, 18 blocked, 27 misses), which averages about one shot per every 45 seconds of hockey.

The Canadiens for their part hit net 23 times, had a dozen blocked, and fluffed on another eight. For the Habs, the most willing aimers were Benoit Pouliot and Max Pacioretty with four apiece. 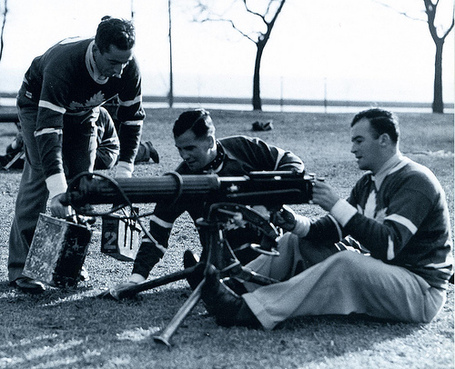 While the Canadiens have surrendered those 186 shots and allowed 6 goals, they have taken a total of 99 shots at opposing goalies, scoring 15 times. Basically, it breaks down to the Islanders, Thrashers, Hurricanes and Maple Leafs scoring on 3% of their shots that have hit net, while the Canadiens converted 15% of theirs.

Is that wacky or what?

That's just one of many insane details in the long strange journey that has so far been "The Season That Logic Forgot".

At close to the midway point in the season, the refurshibished and reconstituted Montreal Canadiens are a sliver above .500, and are doing their best to defy categorization, expectation and generalization from every angle.

At this midseason juncture, two players not expected to play huge roles at the beginning of the season are vying for player of the week honours. There could actually be a tie. The aforementioned Halak could not have possibly been better over the past seven days, and then there is center Tomas Plekanec, who has counted a mere 2 goals and 8 assists in the past four games.

Is that not completely twisted? 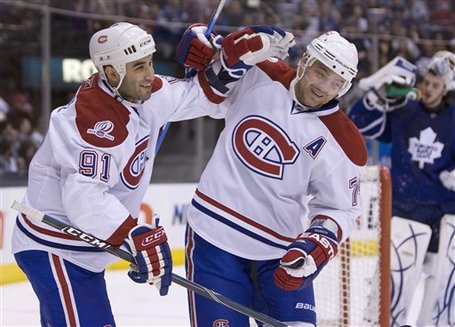 In the game of hockey, great plays are constantly given the highlight reel treatment and the subtlest of skilled moves and plays are put under a microscope. Yet hockey is a game of mistakes, and these Canadiens make them in spades. Such miscues are often only given analysis when pucks end up at the back of the net.

The ratio is unfathomable really. The Habs made a 100 mistakes against Toronto, but were made to pay for only two. The Leafs made about 10 bumbles and the Canadiens connected on three. 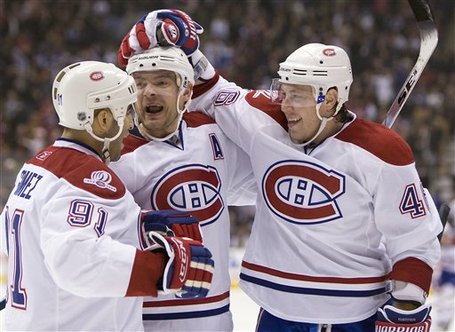 I gather Leafs fans might agree to some point that the CH on Halak's chest acted as a puck magnet in this game, as the blue and white's sharpshooters weren't exactly picking them off. There's entire psychologies devoted to such things in sport, the why and what regarding confidence and patience and visualization and follow through. Many times I have seen the Leafs obliterate the Canadiens on the shot clock and come up deuces. It'll never get figured out. The shrink will always end up the patient on the coach.

This season, the Canadiens have a good half dozen (maybe more!) feel good stories surrounding what is a very average team thus far. Just to check a few off....

Mike Cammalleri has been worth his fat contract, on pace for close to a 40 goal season.

Glen Metropolit has turned into the waiver pickup sent from heaven, and his coach discovers that the perennial fourth liner is a power play boon in disguise.

Halak, the much maligned backup goalie who shouldn't be, has turned into a reincarnation of the 1971 Ken Dryden on many a night. 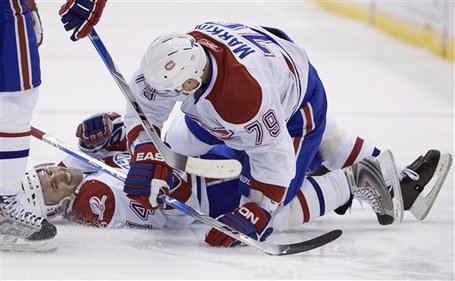 Tomas Plekanec goes from a nightmare season to the top five in scoring.

Andrei Markov returns early from injury, and the Canadiens are undefeated since.

Tangled in all that Hollywood script shit, is one mess of a team that defy the term "unit".

Like John Lennon once uttered, "Everything is the opposite of what it is, isn't it?"

This past June, Bob Gainey hired coach Jacques Martin, a scrupulously structured disciplinarian to bring about a change in the culture of a team he would soon deconstruct. On paper, it seemed a fairly well calculated idea. The team brought in several new faces and most onlookers would agree that a good many (read all but one or two) are upgrades on the players they have replaced.

So far, the Corvette engine on the Chevette chasis experiment has moments where it rolls along, but there are wheels with four different diameters and a missing gear that compromises speed around the corners. The vehicle starts off on front wheel drive, but fishtails in rear wheel drive as soon as it gets anywhere.

The reasons these players might be an ill fit for one another could be that they all rolled off various assembly lines.

After 40 games, the mistakes made have not only been repetitive, but cummulative as well.

Here's a checklist of sorts. A kind of "how many times have you seen this?"

A player with the puck in the Canadiens zone....

.....doesn't look up before his clearing attempt, misses a perfectly clear breakout option.

.....misjudges time and space, rushes the play, and plays right into the opponents coverage.

.....chooses the high risk pass over the low risk clear and creates and odd man advantage.

.....could have skated the puck a stride or two but instead passes it to a player in a scrum.

In the neutral or offensive zone, a player....

....with the puck passes once he has to, rather than when he can.

....with the puck fails to look for teammates and turns over possession.

....fires a dump in without hesitation on a line change, when holding on a split second would have allowed a teammates to fight for possession.

....fires a desperate low percentage shot at a narrow angle, missing the net, and in essense clearing the zone for the opponent at the same time.

Twenty games ago, I didn't like this team all that much. Alienation wasn't the word. Potential seemed nil. Today, at this point, I have begun to see possibility. Enough new elements are now well known.

If every element of this team for able to perform as they can, all at once, the club would be a much more formidable one.

The frustrating part is, even as the power play makes gains, and even as the penalty kill stands studly tall, and even as the goaltending is out of this world, this unit as a whole does not seem capable of progressing in two areas at once. Each forward step is met by regression in another area.

While this campaign so far has had its despairing moments, I find it hard to take my eyes of this team. In "The Season That Logic Forgot", this team is a chameleon.

Before this road trip started, I offered that the team needed to win no less than six of seven to replace itself in good order for the second half of the season.

I believe they will succeed in that, but the next thing you know, because you never know, the Canadiens might start playing much better. They'll cut down the shots against, and may even outshoot a string of teams. They'll learn to battle better for pucks and be more disciplined than they have been all season.

And then they'll lose five straight!