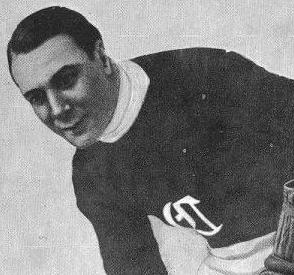 Well it took a good 40 years after his death, but the city of Cornwall has finally gotten around to beginning to pay proper homage to hockey legend Newsy Lalonde.

Born in the city on October 31, 1887, not only was Newsy pivotal in early Montreal Canadiens history, he is far and away the most famous and recognized sporting athlete the city of Cornwall has ever produced. A member of the Hockey Hall Of Fame since it has opened its doors, Newsy was also named Canada's best lacrosse player for the first half of the nineteenth century.

The city has so far honoured Lalonde with a mere photo or two in its local sporting Hall of Fame, but all that is about to change. 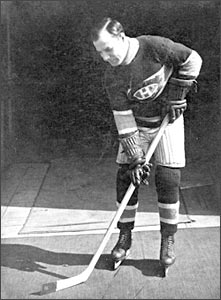 Between 1900 and 1930, Lalonde kicked ass in Canada's two national sports, and it is high time his home town got down to the business of recognizing him.

I'm far from the only Cornwallite who feels this way. For years, many prominent city sporting noteworthies have advanced the idea that Newsy has been given less than his due from the turf that launched him onto the broader scale of sport. For years, local sports writers Claude McIntosh and Thom Racine have beaten the drum about such an oversight.

In the end, it took a mayor with NHL connections and pedigree to pave the path to Newsy being properly recognized. Mayor Bob Kilger, a former coach of the Memorial Cup champion Cornwall Royals and father of former Montreal Canadiens and Toronto Maple Leafs forward Chad Kilger has gotten the ball rolling by announcing that the city will soon honour the hockey great with a renaming of the route that leads to Cornwall's Civic Complex Arena.

Tentatively titled "Newsy Lalonde Way" the circular road brings players and fans to and from the local rink. additionally, city council has also noted that it will add a mural inside the arena walls commemorating Lalonde. At present, murals inside the rink celebrate the achievements of former Cornwall Royals Doug Gilmour, Dale Hawerchuk and John Wensink, who originally hailed from Maxville, Ontario, some 30 minutes from Cornwall.

Among the many achievements of Lalonde's hockey career are scoring the first goal in Canadiens history, captaining the team for several seasons, coaching the club to it's first Stanley Cup, and being the leading scorer in six different professional leagues during his career.

In his day, Newsy was best regarded as the testiest of rebels on the ice as well as off it. A shrewd money man, Lalonde knew his worth earlier than most players and he successfully translated his on ice proficiency to his bank account. As a player, he was the game's premier trickster, consistently finding ways to irritate and outfox opponants with a combination of speed, stickhandling, sheer will and great doses of nastiness. During a professional career than spanned from 1906 to 1928, Newsy tallied 446 goals and 92 assists in 341 games, playing in places such as Montreal, Vancouver, Toronto, and Saskatoon. He passed away on November 21, 1970 at the age of 83. 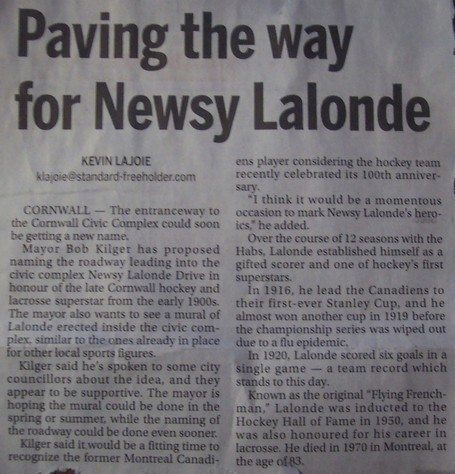