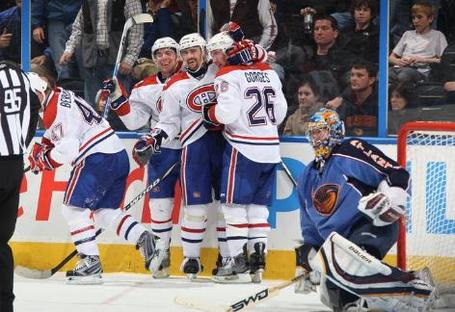 Call the Canadiens 4-3 overtime win against the Thrashers in Atlanta, this: a game of extremities in a season of the same!

All told, it was close to 63 minutes of hockey to baffle every expert, one filled with connundrums to confound, a riddle bag of polar opposites and a bevy of ridiculous notions unfolding before your eyes.

A bunch of things, even at a prolonged glance, simply fail to add up. Just as this team is about to get written off as goners this season, it displays fortitude from the murkiest road trench. It gets shellacked, but the shell shocked goal stands tall. It plays an often small game, but its smurfs and midgets pull off a Gulliver-ish mutiny, turning the master into a slave. 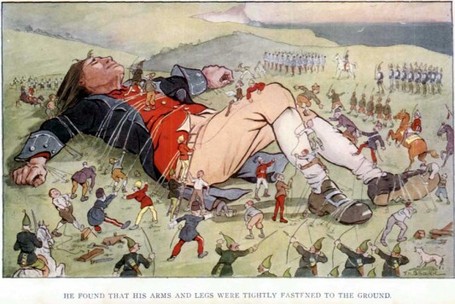 As evidence, the Canadiens are out shot 50 to 23 and goalie Jaroslav Halak is, unbelievably not named one of the game's three stars. This game would have been over about 12 minutes in had it not been for his second stellar performance in as many games.

The Habs have surrendered 90 shots in the first two games of this seven game road trip and are 2-0. Halak has stopped 87 of those and continues to make a case that he's a number one goalie, somehwere if not in Montreal. If GM Gainey is seriously considering trading him, the 360 degree smile on his face threatens to separate the top of his head from his jaw these days. The longer he hangs in, the more Halak's value rises. 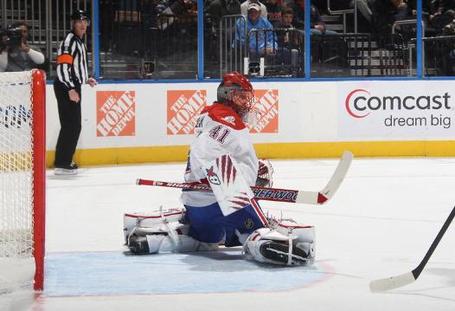 Halak's two biggest accomplices in this "wrestled from the jaws of defeat" win were pint sized hero Marc - Andre Bergeron and the genitally reassigned Tomas Plekanec (check this!), indeed a pair of valuable commodities that will cost the Canadiens more dinero next season.

Bergeron's nightly resume included no less than scoring the tying goal in the game's final minutes on a cannon blast and adding the OT winner after receiving a beaut of a pass from Plekanec, steamrolling Thrashers' goalies Anders Hedberg while skating backwards, deking the goalie with a backhand into an open right side.

Earlier in third, Bergeron earned a two minute minor for bowling over the same Hedberg, sweeping in from the corner to flatten the goalie without apology.

A Hab fan seated behind the Atlanta bench, was wearing Guillaume Latendresse's number, possibly as a reminder than Bergy has assumed his spot on the fourth line.

MAB makes $750,000 on a one year, and GM Gainey cannot receive enough credit for this shrewd signing.

Bergeron, who dresses as a forward won't be confused with Chris Pronger anytime soon, but don't look now, he's tied for the NHL lead (with Dallas' Stephane Robidas) for goals by a defenseman with 9 and he's tied for 18th in points with 19. He goes to the net with aplomb as a forward, but can't find fit on the Habs starting 6 D despite the fact that since Andrei Markov's return, the team is surrendering an average of 45 shots a game.

The Trois - Rivieres, Quebec native was an NHL afterthought one week into the season, as 30 clubs passed on his services. The diminutive rearguard is occasionally a defensive minefield, but has made Gainey look like a genius for heaving him off the scrap pile after Markov went down. Now it looks as though Montreal have revived the killer two pronged power play point proficiency of the Markov - Mark Streit duo of year's past.

Who would have thought? 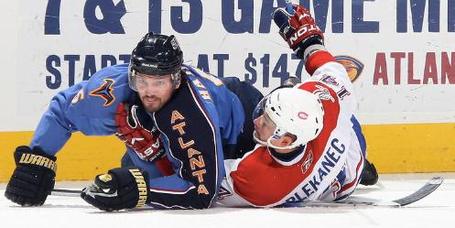 Tomas Plekanec is far and away the NHL Comeback Player of the Year. In his 38th game, he has now surpassed his 39 point total of last season. After posting a sub par 20 goals and 19 assists in 80 games, he now has 7 goals and a whopping 33 assists in 38 games.

Plekanec has always been an honest and dedicated player, but this type of turnaround requires great examination. As there is little new that Plekanec is truly showing - meaning we've seen this quality before from him, just not in this quantity - one has to wonder how and why it has all come to fore as he blossoms into quite the (expensive?) player. The most astute theory you'll hear is that he has had the burden of playing with Alex Kovalev removed from his nightly duty.

The Kladno native is now tied for second in the NHL in assists, something a Habs player can't likely lay claim to since the heyday of Elmer Lach. Lately Andrei Kostitsyn have benefitted as Mike Cammalleri is covered more closely in recent games. Plekanec prior to gelling with those two, was making any player on his trio look good.

Without the responsability of having to cater his game to Kovalev's weighty style, Plekanec has been freed to use all on ice elements like he rarely has be allowed in the past. It's a revelation to watch him bloom.

How about this for an extremity? The more pressing it becomes for Bob Gainey to resign the pending UFA, the less likely is Plekanec to be in a hurry. Just weeks ago, it looked like a $4.5M a year renumeration would make for a fine salary fit, but now Plekanec is obliterating arguments that he's worth a cool $6M.

Plekanec does it all for the Canadiens. He's a more than dependable front line center five on five with strong defensive habits and awarenesses. He's the pivotal draw man on a first PK unit that has gained gallons in credibility over the past month. He's been the shrewd and alusive centerman on the power play, with no recognizable stigmas for the opposition to stiffle him with. He's taking a beating, but keeps on ticking. As dangerous as he's become with the puck, he's not to be left unguarded without it.

The resume of his night's work against the Thrashers was akin to a platter of served hors d'oeuvres that all tasted uniquely different. His goal and three assists were offered as individual displays of all the things he's been doing so well across 38 games.

On his goal, he streaked to the net with Kostitsyn as a decoy, the second feed option far from the play. He craddled the pass a split second, aimed, and then zipped a wrister into the opposite top corner, catching Hedberg moving the other way. If you blinked, you missed him let up on dashing to the net, just as Cammalleri caught his gaze. It was a subtle but atuned example of one little detail in his game.

He did the grinder horse work on the Kostitsyn power play goal, fighting for the puck along the boards, never caughing it up while being shoved, hacked and handled by an Atlanta defenseman. He hung onto it no longer than he needed to, and just as he was about to draw more attention, he slipped a soft feed to Cammalleri in the corner, who fed pass to Kostitsyn at the crease. The Atlanta focus time on Plekanec was such that Andrei had time for two whacks in scoring the goal.

On the tying goal by Bergeron on the power play, Plekanec was set up in Kovalev's old playground off to the right side board. He was economical in three quick plays, first cultivating the puck as it skinned round the corner board. He then took a split second to place himself, never allowing the Atlanta coverage to settle still. As soon as a Thrasher moved toward him, Plekanec dished off to Bergeron at the point. Just as quick, he received the puck back from the blueline, passing a one - timer cross ice to Markov who fed Bergeron for the blast. On the clock, this took all of six seconds. Kovalev would have used up a minute to paint such artistry, but on Plekanec's canvas, the paint is stil wet.

The overtime winner four on four was a textbook demonstration of what players without the puck must do to create pressure and goals. First, Plekanec took off, flying into open space in mid ice for a feed from Josh Gorges. Receiving the pass, he strode over the red line into the Atlanta zone, twice dragging a skate and pausing briefly to scan the landscape. Stopping inside the blueline, he fed a blazing Bergeron with a pinpoint feed just as he hit the crease's edge. Curiously, had that play broken down, Plekanec had both Gorges and Cammalleri as additional trailers streaking in, with himself poised to handle the back check.

Not making the highlight reel, was a shorthanded breakaway by Plekanec that could have altered the game earlier on.

A similar short handed play with Markov leading on three on one rush died a quicker death when recipient Scott Gomez fired three feet wide without even allowing himself a better look at the netting available to him. Call it Gomez squeezing the stick and being unaccustomed to Markov's space and time creating feeds, but once the Thrashers had come back to retake the lead, this bungled play haunted as a possible turning point. For a team being dominated as such, it can't afford to waste precious scoring chances. The game would have been 3-1 at that point, and the short handed KO would have set the tone for the remainder of the game. 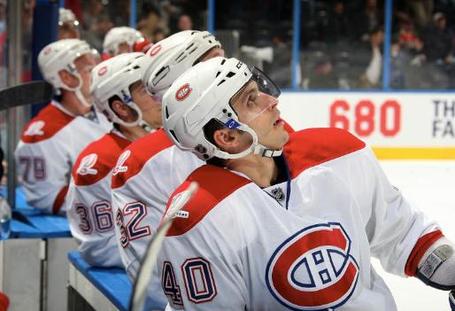 It's great to see Andrei K looking like the better of his old selves again, but in a single game he's still quite capable of alertness and fog. On the Thrashers first goal late in the opening period, there must have been a dense mist encompassing AK46 as he was caught in the muck and mire three times in a split second span. As the first forechecker on a clearing play, he simply glided towards center, applying little puck pressure. From there, a coasting semi circle followed, not a gear engaged as a second pass sped by him. He'd lost his wing by this point, committed too far left and inside the Canadiens zone. Realizing he'd blown coverage, he stopped, did a sweep check and turned to find his defenseman Ron Hainsey streaking in behind him in the position he'd vacated. Hainsey skated in deep, unharmed and uncompromized, to feed Kovalchuk at the crease. 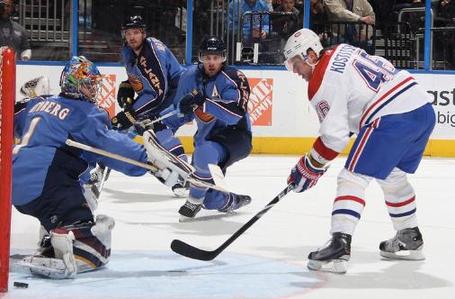 Other than that miscue, there have been more confidence inspiring moments from Andrei. He seems to get that in the offensive zone, he has three mandates to fulfill: hit opponents who have the puck in his vicinity; make himself availaable for passes in open spaces, and follow shots briskly to the net. He's a PPG player when he zoned in, no better than a pylon when he's not.

We've seen it time again this season, how the Canadiens own the ability to use their speed assets and turn games on a dime. Does it not make you wonder why, in the team's approach, such strengths are not employed in forechecking the opposition to death in their own end. Wouldn't a "two men deep" philosophy allow players such as Maxim Lapierre and Max Pacioretty, just to name two, to gain more puck time deep in the right end. Plainly said, doesn't puck pressure lead to more puck possession?

Maybe they want to employ such tactics in their game, but the lack of a second strong scoring line kills any momentum, and the many penalties taken zaps the thrust from sustaining any prolonged, shift to shift attack. Perhaps solving these two sore spots would heighten the Canadien's overall standing, being that goaltending is better than good, the penalty kill is feared and power play has recently added a second cannon.

Cripes, does that constitute a statement of hope after all?