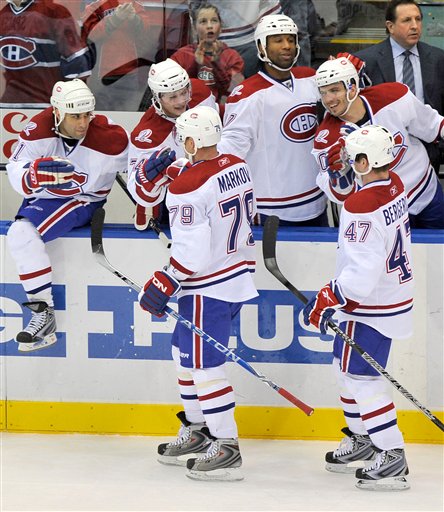 Bring on the hyperbole, the rhetoric, the obvious and the outrageous claims.

Or, keep your feet firmly planted in reality, dim as it often can be.

Not sure if the glass if half full or half empty today, but there are still fears that it is made of disposable plastic.

Last night, the Canadiens ended a five game skid, shutting out the New York Islanders 3-0. The game was highlighted by the return of the Habs' best player.

Yes, it sure is hard not to get caught up in the excitement sparked by Andrei Markov's headline snatching return to play, but there are a few points to consider while floating up to cloud nine, eyes glazing with great expectations.

For starters, never use the New York Islanders as any type of measuring stick. Misleading isn't the word.

Markov's two goal contribution cannot be diminished, but it needs to be underlined that Canadiens' special teams and goaltending were factors one and two in this win.

With Markov added, the Habs PP, already pretty decent without him, just got a whole hell of a lot more fearsome. The PK has been rolling along at a freight train's rhythm for a good spell now. Jaroslav Halak offered up his spectacular, once every second game, standout performance.

Markov's return is supposed to help set the Canadiens defensemen's minutes and usage to a more appropriate tuning. Playing a little over 20 minutes, such was accomplished. He played a somewhat daring game at times. 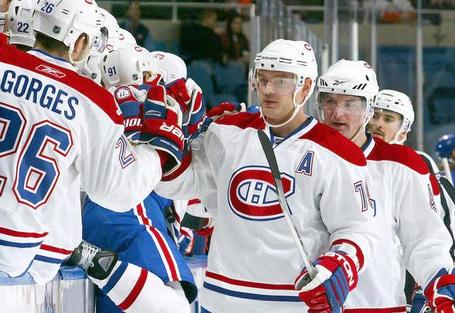 The concern, and it's been a constant issue, is how come the Islanders get off 75 shot opportunities in a game where the Canadiens' player's responsibilities have gotten more defined?

That's 40 shots on goal, 24 blocked, and 11 misses - a whopping total not entirely explained by the Canadiens giving the Isles 6 PP chances.

Wouldn't you assume that with Markov back, even though it is the first game, that the Canadiens might just keep the Isles to maybe 30 shots? Was that too much to expect?

The bottom line I suppose, is that there will always be ugly wins, the two points in the standings in this type of season being what matters most for now. 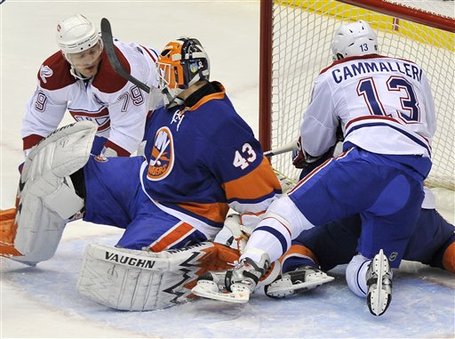 Still, I'll take a bit more comfort in a game in which, say the Habs come up a minute short against New Jersey (or Pittsburgh!), than I can, for now, of a whitewash against the Islanders.

There is also some good news.

Oddly, Tomas Plekanec took three of the Canadiens' six penalties, depriving the PK of his valuable contibution, and they still made out just fine.

The number of Islander shots tend to tell the tale that the Canadiens didn't enjoy a great puck possession game, but the did do one thing very well when it counted most, which was winning faceoffs on the powerplay.

Get a load of this. For the night, Plekanec and Gomez were 64% and 65% victorious on draws. On the power play, the team as a whole was a wicked 86% on faceoffs in the offensive zone, with NYI only winning one of seven. If you break it down, this just might be where the game was won and lost.

Gomez, I'll admit, is finding subtle ways of impressing me of late. I've made it a point to study him more closely, ot simply concentrating on what he does with the puck in the offensive or neutral zones. I watched a solid performance by him against Jersey and against the Isles he was impeccably placed defensively for the majority of his "without the puck" responsibilities. I think that Sergei Kostitsyn can and will become a more valuable attribute to him once Brian Gionta replaces D' Agostini on that line. Sergei has a knack for puck possession deep, which in time, if kept intact, will manifest into passing options for Gomez and slotting time for Gionta.

Most PP minutes: Streit with 7:17 for the Isles and Gomez with 3:35 for Montreal.

Most shots on goal: For the Isles, Jack Hillen with 5, markov for the Habs with 4.