Gomez Plays Like A Girl, Habs Outhustled By Leafs 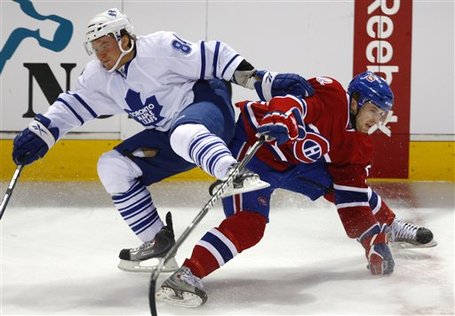 While the Habs were busy caughing up the furball that was a 3-0 loss to the lowly Leafs, I was thankfully watching my ten year old, her sixth time on skates, run through drills with her Atom teammates.

I'd catch the game later, the late show Express on RDS.

It's a treat to watch a kid innocently playing a game, taking great pleasure in finally conquering what it takes to stickhandle a puck on snowny ice from goal line to goal line without stumbling. Robyn is a late starter to the game, unlike her 14 year old sister Crystal, who took up the game at five. 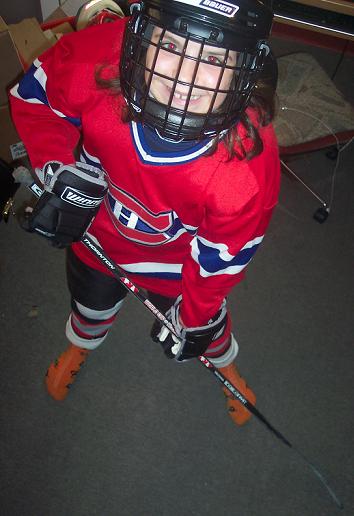 So there's memories, and then there is forgettable games.

Nothing like seeing a wobbly skater on the slowest "paint could dry" breakaway ever, coast in towards a goalie and let a shot go that skitters through the pads, look around for Dad, and not have a clue how to react. She learned that it's hard to do a thumbs up with a hockey glove on!

Little did I know that while all this hockey learning was going on, that the Habs were once again getting schooled by a hard working Leafs team.

That's one of the nice things about catching the game on RDS' abridged Express version, one doesn't have to suffer through the drawn out two and a half hours of a suckish hockey the Habs offered up on this night.

Yup, this one stunk like the Vancouver, Pittsburgh and Nashville debacles earlier in the season, and the one good thing to say it that it is hoped they got the stinker out of their system before Friday night's 100th Anniversary game.

I don't care, and never will care, where the Toronto Maple Leafs are in the standings when they play the Canadiens, especially when games are in Montreal. When the Leafs meet the Habs, they always, almost without fault, bring their A game...at the very least their A effort.

So apart from guys like Price, Lapierre, Plekanec, Hamrlik, the Kostitsyns, and Gorges, guys that were around a season or more ago, none of these new kids on the block and free agent signees are indoctrinated in what one must bring to a Leafs game.

Get ready for a team that rarely quits.

Be aware that the Leafs are so pumped for the game, they might as well be the '85 Oilers.

Prepare yourself for the notion that you are in a lion's den.

Take a minute off, a small lapse, and it's roadkill for the Tazmanian Devil. 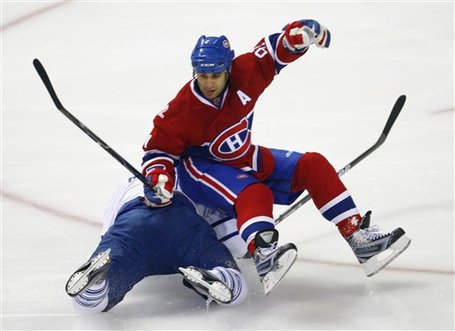 From my couch, it sure looked like guys named Gomez, Moen, Spacek, Metropolit, Mara, Pacioretty and others were atuned to this reality.

How bad was the effort?

Leafs 'tender Jonas Gustavsson left the game after the first period with heart palpitations, a reccurring problem for the Swedish goalie. Had he suffered a heart attack and croaked in the crease, it would hardly have mattered. he could have layed there dead for 40 minutes, the final would still have been 3-0 Toronto.

When the house DJ spins the Stones "I Can't Get No Satisfaction" by the third period of a game in which the Habs have yet to score, it's gotten personal!

This Canadiens team had been better than this of late, but of the many traits it possesses, killer instinct ain't one of 'em.

It started off good, a Cammalleri chance close in, then a decent power play with a shot or two threatening to put the Habs up. But as is often the case, it was all rubber bullets from there on in.

Perimeter shots, feable attempts just hitting the net, players seemingly afraid to pay the price against a Leafs team that honours that credo.

While the Canadiens did seem to have some semblance of momentum for a mere eight minutes, it all went to hell on a rare as Popeshit goal from none other than reputable sniper Colton Orr.

Tell me why....why fuckin' what, is cement footed Kyle Chipchura doing covering the fleet as they come Phil Kessel on that goal when the Canadiens have the last change?

Another mystery, a riddle really, is why Habs fans waste so much spit getting on Mike Komisarek's case for the umpteenth time when they have Scott Gomez to bare the brunt of their pent up venom.

No mincing, Gomez has to be the most chickenshit player I've seen round these parts since Jason Spezza.

I heard it said on the broadcast that he's not the same player without Brian Gionta.

It takes testicles that's it!

Kessel's got one and he uses it. What'll it take for Gomez to get his rolling.

Other than winning one puck battle behind the net, I failed to catch a proper glimpse of Gomez doing anything that took guts.

Yeah he skates all pretty and often untouched through the neutral zone, but then he gets inside the blue line and throws off lame 45 foot wristers that goalies can stop in their sleep.

Gomez takes the easy way out too often. He doesn't defy, challenge, bare down, get dirty, deke, outmuscle or bust through. He just wings it, hoping.

Unless there is a teammate bullying his way into the crease, that effort is useless.

Unless you're the reincarnation of Stephane Richer, why bother.

That's why Gomez is an overpaid 15 goal scorer, and by what I've seen the past five games, the Canadiens are a harder team to play against when he's not in the lineup.

Bottom line, and I love womens' hockey, but Gomez is playing like a girl.

No offense to mine.