Lack Of Discipline Costly As Canadiens Come Up Short Again

Share All sharing options for: Lack Of Discipline Costly As Canadiens Come Up Short Again 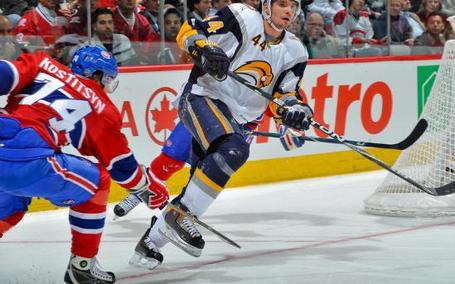 The Canadiens penalty kill has been, well, killer of late.

Not sure of the exact numbers, but it's something like 2 goals scored against in the last 40 opportunities. They recently went 33 kills in a row without a goal surrendered.

While that is one awesome facet of team play, is there a downside?

Apart from pooping out the PK participants, could it be that the Habs' players faith in themselves and their proficiency when it comes to snuffing out foes man advantages be having the adverse effect of creating indiscipline on the ice.

It seems that in the last three contests, as the PK gains prominence, the team is taking more and more penalties.

It's the type of calls, careless fouls and outmanned deeds, that lead me to thinking that some players are losing sight of the bigger team picture.

The Canadiens are not a slow footed team, but they are getting into trouble because certain players are consistently being outworked.

Ryan O'Byrne and Glen Metropolit have been guilt of late, taking penalties on plays where scoring chances weren't in play. Each took three penalties against Buffalo last night. The Gomez slash was no brighter.

This team needs to realize that its margin of error is thin.

It's only thing to be looking ahead a little too soon to Andrei Markov's return thinking he's the season's savior. It's another to be all well and fine, dazzled by the performances of the Tomas Plekanec, Mike Cammalleri and (finally) Andrei Kostitsyn trio, but one line firing can't save the team's collective butt on a nightly basis.

Even goaltending, as great as it can be at times, won't carry the team.

Every single player's contribution on this team is needed, and it's often a case where what some player's don't do that is the difference maker.

It's all good to have a solid PK, stud goaltending, and offensive guns cocked, but if the smaller details aren't managed it all goes for waste.

Of 18 Canadiens losses so far, 11 have been by one goal. Reverse a couple of those results over a long season....

The bottom line is, the indiscipline is the effect and not the cause. Mike Boone nails it succinctly when inferring that the penalties are of the lazy variety. Holding, hooking and tripping calls are the result of being outworked.

And that's what this team needs to work on most, otherwise those awesome PK units will be in for a long hard ride.

If the tide doesn't turn, such a thing will wear a team down by mid season, negating the boost brought upon by Markov's return.