Share All sharing options for: Markov Planning A Birthday Return For December 20? 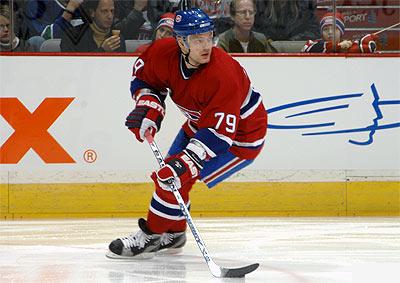 Andrei Markov turns 31 on December 20. Could it be that Markov is planning to return to the ice on the day he celebrates his birthday?

One thing is certain, the Russian blue liner is far ahead of schedule in rehabilitating the achilles tendon injured in the season's first game.

Friday morning, Markov skated alone for 60 minutes and it can be said that not only was the familiar fluidity to his stride in evidence, but that his bursts were explosive, leading to the belief that such a return to the team's ranks could come any day now.

Markov has accompanied the team to Atlanta this evening as the Canadiens prepare to face the Thrashers. The Habs PP quarterback is not expected to play, but is scheduled to meet with team doctors on Monday to get the green light. The simple fact that he has rejoined the team suggests that he has reached an important step in his recovery.

If there is one rival player interested in these developments, it would be the Penguins' Sergei Gonchar. The veteran Russian defender would surely love to count on Markov's contribution come time for 2010 Olympics.

"I'm of the opinion that Markov will be back before January, so he will have had enough time to be ready for the games," Gonchar states. "He's good enough to quickly refind all his synchronism. We've played together on occasion in the World Championships, but it's hard to say if we will be paired in Vancouver. When we did play together, we had no trouble finding each other on the ice"