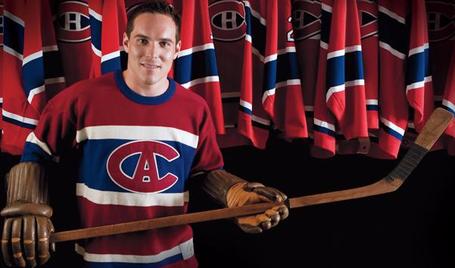 Alex Kovalev reached a peak in popularity two seasons ago during a campaign in which he scored 35 goals. Time moves on, and l'artiste's spot in the fans' heart has been taken up by Mike Cammalleri. While Kovalev is soul searching in Ottawa, Cammalleri has definitely found his game with the Canadiens. In fact, he is in the process of becoming a fan favorite.

Last Tuesday, Cammalleri scored his 17th goal in his 31st game. He is on pace to net 45 goals this season. Such a feat hasn't been seen since Stephane Richer counted 51 goals.....20 years ago!

With the exception of Kovalev in 2007-08, Cammalleri's production places him in the company of players from another generation, a generation that skated on Bell Centre ice on December 4th.

To illustrate the point, after 30 games Cammalleri had scored 30 goals. One must return to the 1995-96 season for a comparable, when Pierre Turgeon and Vincent Damphousse each totalled 14 goals after 29 games.

Cammalleri would be putting an end to quite a drought should he stay on pace and surpass that feat.

For now, Cammalleri can aim to be the first Habs player since Bobby Smith in 1988 to reach the 20 goal plateau by Christmas.

In past seasons, Cammalleri had a habit of scoring roughly 50% of his goals on the powerplay. This season has been an anomaly, with 14 of 17 coming at even strength. Across the NHL, only Alex Ovechkin (15) has scored more often 5 on 5.

That's all good and well, but as most goal scorers tend to produce in patches and sequences, Cammalleri is keeping his feet on the ground. Coach Martin as well.

"In addition to the goals scored, it is hoped that he continues to play well," Martin says. "A player cannot control how many pucks go in, but he does have control over the chances he is getting. For now, Mike is on a roll, he's playing well and working hard at both ends of the rink." 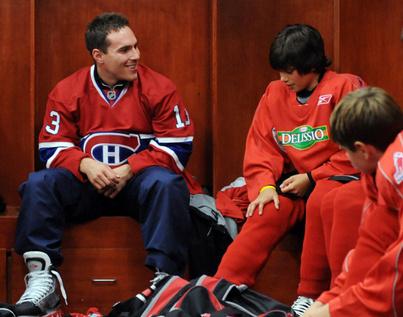 In all fairness, it should be noted that Cammalleri has greatly contributed to the success enjoyed by Tomas Plekanec this season. The two players are in the process of developing some nice complicity, at even strength and on the power play. The qualities of each player compliments the other.

"I really appreciate playing with Tomas, he's playing some extraordinary hockey at the moment," Cammalleri says. "He brings many things to the team and he is very gifted. Among other things, he's a very strong passer. In addition, he's doing excellent work on the penalty kill. He's probably one of the most underestimated players in the league, but something tells me that won't be the case for long."

Should present tendencies continue to bear fruit, the Canadiens will place two players, Plekanec and Cammalleri, in the top 30 scorers in the league. That is a feat that has not been seen since 1996-97, when Damphousse and Mark Recchi hit for 81 and 80 respectively.

Cammalleri was much more talkative in regards to team success than he was in regards to personal achievements. Prior to facing the Penguins on Thursday, the Canadiens were on an odd sort of streak, having outscored the opposition 12-3 in three wins while being outshot 89 - 69 in those games.

Despite giving their foes 18 power play chances, the Canadiens responded with 3 power play goals of their own.

The duo of Cammalleri and Plekanec is going fulltilt, special teams are having their say and both goaltenders have put in strong performances. What excites Cammalleri most is that the team if finding ways to win.

"What is preferable, losing a game when you've played very well or a win that looks it wasn't particularly deserved?," asked the 27 year-old winger. "Personally, I'll take the ugly win, because in theleast it gives us a chance to build upon something positive while reminding us that there is room for improvement."

40 goal scorers on the Canadiens over the last 25 years

Also, check out the Gazette's Jack Todd's plea for Cammalleri's inclusion on the Olympic Team Canada.