Can The Canadiens Win The Northeast Division?

Share All sharing options for: Can The Canadiens Win The Northeast Division? 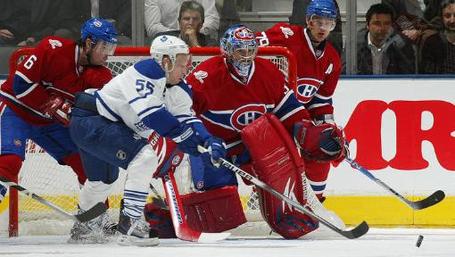 A simple question for a Monday morning.

Can the Canadiens win the Northeast Division?

One quarter of the way into the 2009-10 season, it appears that no team at present is poised to run off with the Northeast Division title. As the current standings show, the top four teams are separated by a mere five points, and it gives credence to the notion that if one club were to get hot at this time, they could conceivably eclipse the other three.

As it stands, the Bruins lead the pack with 31 points, followed by the Sabres and Senators with 30. The Canadiens are 4 points back of Buffalo and Ottawa, and 5 back of the Bruins. A busy December schedule that sees them play 17 games in 31 days is a crucial month of the season. When the New Year dawns, the Habs will be sitting just past the mid-season point, with 43 games played.

It is not certain when key players such as Andrei Markov, Brian Gionta, Scott Gomez and Andrei Kostitsyn will make their return to the lineup, but with Markov beginning ti skate again and strong showings from the team in recent games, an air of hoprfulness has returned to Montreal. The play of youngsters such a Max Pacioretty and a rejuvenated Sergei Kostitsyn also serves to bolster the Canadiens' chances.

A look at an uninjured Canadiens roster speaks well for the team's potential: 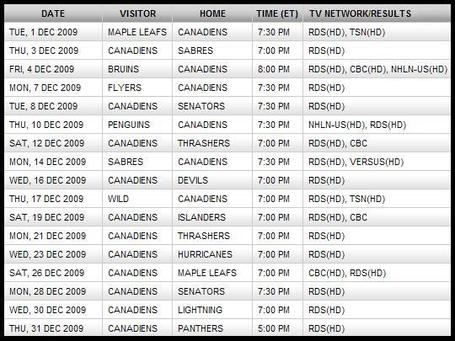 December's schedule begins Tuesday with a home date against the Toronto Maple Leafs and features six other games against Northeast Division rivals. Six of the first ten games, between December 1 and 17 are at home, while the following seven, during a 12 day trip are on the road. The Canadiens play back to back games twice, playing the Wild in Minnesota following a home date with the New Jersey Devils on December 16. The round out the calendar year in the state of Florida, with games against the Lightning on succesive nights.