Plenty Of Good Promise Shines Through Despite Loss To Capitals

Share All sharing options for: Plenty Of Good Promise Shines Through Despite Loss To Capitals 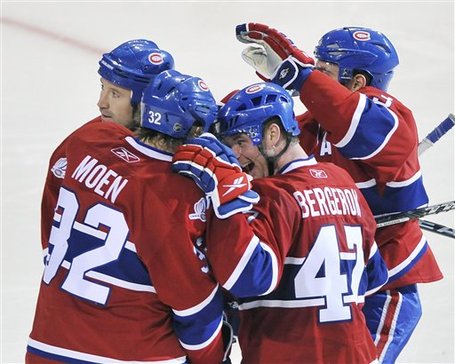 Some losses are bittersweet and harder to swallow than others, and the Canadiens dropping a shootout point to the Capitals doesn't qualify as one of them.

Yes, it was a bit trying to see the Habs drop the ball shorthanded in the final minute of the game, but the ubiquitous Washington Capitals are a team built to take advantage of such situations. Witness the similarity between the end of this game, and the contest between the teams in Washington a week prior. Both games featured carbon copy story lines, with Montreal falling behind before wrestling the lead from the better team. Both contests included wild finishes, and in this one, a Maxim Lapierre goalpost is all that kept it from being extended.

I've been a little slow in warming to this team full of new faces and I know I haven't been alone. Glimpses of a bigger picture, a better and clearer view of this new club and what it could be capable of have been few and far between.

Oddly, I grasped a vivid look at the potential of this club in this narrow loss, and it has me feeling somewhat surprised. It came with the crisp awakening of a slap in the face.

What happened, how it happened, had all to do with the way the team responded during two crucial points in the game.

The first came immediately after the Capitals scored a pair of goals 1:12 apart in the first period. The Habs had been busy running around, augering themselves into ice, when Jacques Martin likely heard me, you and a hundred thousand others scream "Call a friggin' time out!" After he did, it helped settle the team down. It wasn't a moment too soon, as this game seemed a Capital goal away from becoming a blowout.

Martin was on the ball, and clearly showed at that moment that he has his pulse on the mindset and fragility of this club.

Equally important in the turnaround, and if you were watching on RDS you heard Benoit Brunet hit a rare nail on the head, when he called a pair of Carey Price saves a potential turning point. Price was hardly at fault for the 2-0 deficit, and he showed his mettle as goalie by shutting the door when he did. The crowd responded a gave him a rousing hand, and the team responded by beginning to take the game away from Washington.

Those two responses spoke that we were in for a hockey game, despite being behind by two. It also spoke a volume or two for character the club is building.

Starting in the second period, the Canadiens were carrying the play, and they forced the Capitals into committing a few fouls. Montreal were in the midst of totally blowing a power play five minutes in, when Jaroslav Spacek rescued the situation, scoring to bring the game within one. It was then that the Canadiens put the pedal down and earned the evenings' point.

It was during these moments, from then until the end of the game, that I began seeing a bunch of eye openers, that put a big grin where it's supposed to be for the first time in a long while. I saw some beautiful things unfold. 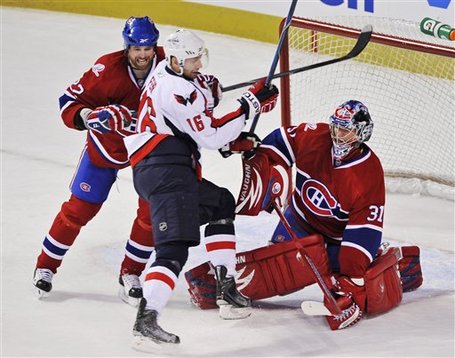 One thing I often look at in the course of a game, is how defensemen are reacting to a goaltenders' work. I judge their faith in their stopper by how often I see their jersey numbers, logic being that if we are seeing 6, 44, 26, 47, 22 and 3 too often near the crease and its perimeter, it is because they are turned toward Price, more worried about his tasks than their own. If a goalie is solid, the D men are confident, and they should then be focused on what is coming at them instead. If this is happening, like it did for great stretches last night, not a lot of numbers will be seen in that space.

In that regard, I've gained great appreciation for the effort supplied by Spacek and Roman Hamrlik. They are like the coolant under the Canadiens hood. At key times, their poise removed panic, and their swift work translated into the forwards having that extra split second to assist them in their work.

The positional play of the blue liners in this one was pivotal. Washington has 23 shots on goal for this game, with the same numbers of shots being blocked. Of those 23 blocked attempts, 11 were credited to the Hamrlik / Spacek duo. The remaining four defensemen, got in the way of only four shots, with 2 each credited to Bergeron and Gorges.

The work of four kids really brought me up from the couch, starting with Max Pacioretty, who looks more and more comfortable as a solid NHL'er with each passing game. Pacioretty is doing all kinds of good things in recent weeks and in this game he was outmuscling opponents, holding his own in battles along the boards, logging the puck for precious seconds, making crisp passes to originate plays, cruising into the slot to take shots and heading to the net to obstruct and create havoc. What was so beautiful about it, was that it all seemed to come so naturally to him. 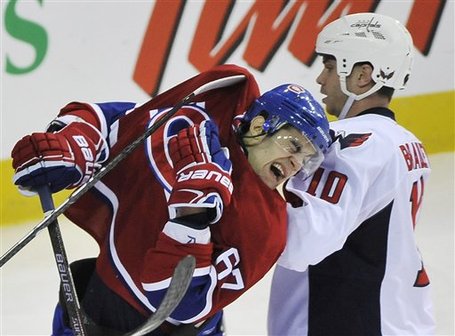 In truth, it has been about three or four games that little things Pacioretty has been doing are jumping off the screen. I attribute it to him being allowed to play and mature with regular linemates, and veteran ones in Glen Metropolit and Travis Moen. Pairing a kid with reliable vets has tons of merit, and it speaks volumes for how to properly develop a prospect. That said, those 25 games of tutoring on one regular line is something that Guillaume Latendresse rarely ever got and desperately needed, and hopefully it is something that would serve a player such as Sergei Kostitsyn particularly well.

In short, that's exactly the double edged sword that injuries provide. Opportunity for the kids is created, but the assignments need to be managed more thoughtfully. 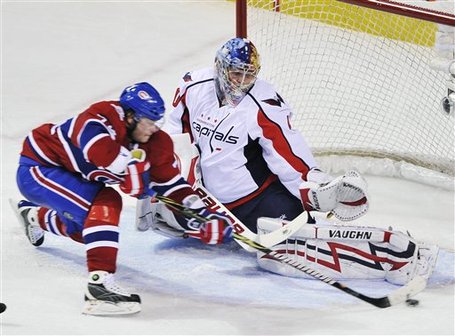 In three games since being recalled, Sergei has shown why he was so missed. The younger Kostitsyn looks like his head is on straight, as he's alert and disciplined. When things were going bad for the kid, he had this gnawing tendency to sit still with a WTF expression on his face whenever something crapped on him. Since his callup, he's displayed none of those trademark lapses, and has gotten down to the business of sparking the team creatively. His fluid skating, swift passing ability, brisk vision and dogged traits have all been in evidence. Against Washington, there were several heads up examples of this, especially the alert puck robbery of one Capitals forward headed the other way that turned a play around for the Canadiens. He's looked good out there, and his timing could not have been better. Once the injuries on team settle down, Sergei should stick around.

Impressive have been rookies Tom Pyatt and Ryan White. While White assuredly has the most offensive upside of the two, Pyatt has been perhaps the bigger surprise. Blessed with a great skating stride, does this kid ever get in deep on the forecheck! His speed allows him a great economy of time in his chasedowns, and he's gaining a rep for catching slow acting defensemen off guard. It's happened several times that I see a Canadiens player pinning an opposing player behind their net, and lo and behold, every time I take note, it seems to be Pyatt on them like a radar. Where he fits in, in the grander scheme of things becomes an interesting notion. On the Habs' depth chart, my guess is that he has jumped ahead of Kyle Chipchura.

Ryan White has some pitbull in him. He wears a shit eatin' grin game face that looks to be a cross between Lyle Odelein and Alfred E. Neuman and seems always eager to sign up for dirty work. His defensive coverage is improving by the game, and seems to enjoy mucking it up along the boards to great extent. What's so far been untapped, is a playmaking ability and shot that is the reason why he was drafted by the team. What's keeping him on the big club is the instinctive ethic that he brings to every shift. You get the impression that the kid doesn't need to be told a hell of a lot to get a job done. Pyatt and White, nine games into their NHL trail, were the two most used Canadiens forwards on the Canadiens' penalty kill against the Capitals. On a team with a shortened bench and inexistant fourth line, that stat says tons of good things for those kids.

So yeah, it was a bit of bummer losing in the shootout when the team deserved something better, but as I see it, starting with some of the kids, little corners are being turned one at a time.

I've been a hard fan to excite most of this season. Hearing of Andrei Markov back skating this week surely perks up the hopefulness. Seeing the team deprived of so many key elements and still going down fighting is awful inspiring. I could perhaps even begin to be sold on the notion of a very solid club that may turn out to be stronger than the simple sum of its parts.