Share All sharing options for: Habs Finding Ways To Defy The Odds 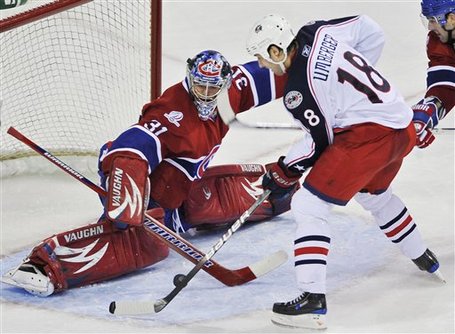 It's insane somewhat to consider all the things that simply do not add up in looking at the Canadiens 5-3 win over the Blue Jackets Tuesday night. Some things make sense, other's don't, and certain things are quite revealing.

For starters, I quoteth Mike Boone quoting CKAC's Dany Dube suggesting something along the lines of "44% of the Habs salary cap" being out of the lineup for this win.

What is making sense is that the players in the lineup are all working their tails off and it is starting to show consistent dividends. They have won more of late than they have lost, which is inspiring on its own. A hot Carey Price has had a reassuring, calming effect on the group. There is less panic evident and the Canadiens are finding themselves in games that they might otherwise not be. The work ethic and confidence have taken root.

What makes no sense at all, is that current roster filled with callups, spare parts and castaways is actually a .500 hockey team after 24 games. The Canadiens have already employed 34 different players this season, nearing last season's total of 37, and the shuffling back and forth between Hamilton and Montreal has been frenzied. Eight of those 34 have played in Hamilton this season. Kids such as Tom Pyatt and Ryan White have not looked out of place and Sergei Kostitsyn looked like his better self last night, in his return to Montreal.

What may be revealing, is that after losing both Gionta and then Gomez, the team and it's lines seem more settled than ever. Having earned seven of eight points this past week and the emergence of what looks to finally be a number one line in Tomas Plekanec, Mike Cammalleri and Andrei Kostitsyn seem to suggest that the team is pointed in the right direction.

Perhaps out all this insanity, the team is developing an identity. The leaders are those that should be leading. When that happens, support follows from unlikely sources.

Cammalleri heads the group, a sniper who rises from nowhere to pot timely markers. He looks like he's on target for a 40 goal season - a weapon the Canadiens haven't had in ages.

Plekanec especially, with 10 points in his last six games continues to be a revelation, as he's often pitted against other team's top pivots. A true test for his will come against the Penguins tonight.

Price never verbally answered Allan Walsh, the agent for Jaroslav Halak, after he posted some unflattering stats about him on Twitter. The answer has come in his play. 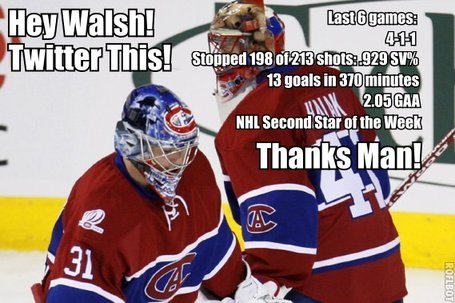