Who wore the first number 99 in hockey?

Share All sharing options for: Who wore the first number 99 in hockey?

I recently came upon a question at Joe Pelletier's Greatest Hockey Legends that I thought I may be able to shed some light upon.

At the site, Joe was asked in regular "Ask the Hockey History Blogger" about the origins of the number 99 in the game of hockey. While it is common knowledge these days that two players of recent vintage (Rick Dudley and Wilf Paiment) wore Wayne Gretzky's famous number, details concerning the three Montreal Canadiens are a little fuzzier. Quote from the GHL post:

Besides Wayne Gretzky, who else has worn #99 in NHL history?

This is a pretty common question I get. The answer is 5 other players wore #99, including two who wore it at the same time as Gretzky in the early 1980s.

The first occurrence of number 99 came way back during the 1934-1935 NHL season. The Montreal Canadians had three players wear #99: Joe Lamb, Desse Roche and Leo Bourgeault. The story around this has never really been solved. The likely story is the Habs had an extra jersey used for practices with the number 99 on it. Lamb, Roche and Bourgeault were all call ups during the season, playing briefly with the Habs. All three likely shared the jersey for their various appearances.

Who was first to wear #99? Again, that's real vague and a question no one seems to know the answer to for sure.

Looking through the archives of Le Petit Journal, to the week of November 10, 1934, the entire first game of that season's schedule is documented in the sports section's pages. The following day, a summary appeared, along with a listing of player numbers for fans to keep in following the team. Of the three players mentioned above by Joe, only Joe Lamb was dressed for the opening night loss to the Toronto Maple Leafs. As both Roche and Bourgeault were not yet on the Canadiens' roster, it goes without saying that Joe Lamb was the first of the three players on the 1934-35 Canadiens, and in hockey, to wear the number 99 sweater. 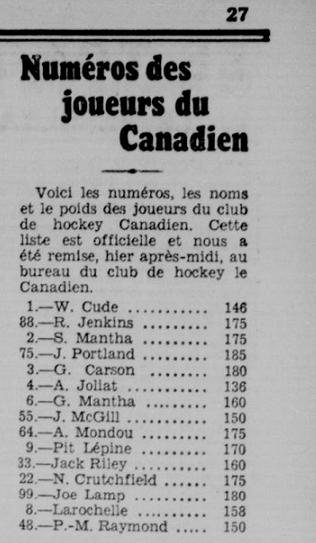 Lamb was traded to Montreal by Boston for Johnny Gagnon on October 2, 1934. Prior to Joining the Canadiens, Lamb had also played with the Montreal Maroons, Ottawa Senators and New York Americans. Lamb acquitted himself well in Canadiens uniform number 99, notching 3 goals and 2 assists in seven games. 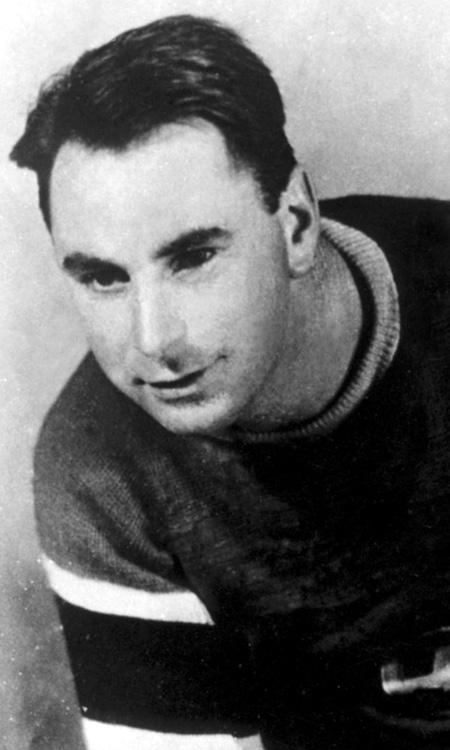 On December 4, 1934, Lamb was traded twice in the same day. First, the Canadiens sent his rights back to Boston for cash and the Bruins immediately dealt him to the St. Louis Eagles for Max Kaminsky and Desse Roche. After 31 games with the Eagles, Lamb was back with the Maroons the following season, followed by another year and a half with the Americans once more, rounding out his NHL career with 14 games in a Red Wings sweater.

Desse Roche was acquired by the Canadiens from Boston in a cash deal on December 8, 1934. He would suit up for five games with Montreal, first wearing the number 75, and then 99, gaining one assist in that time. On December 26, 1934, Roche was on the move to Buffalo of the IHL, again in a cash trade. 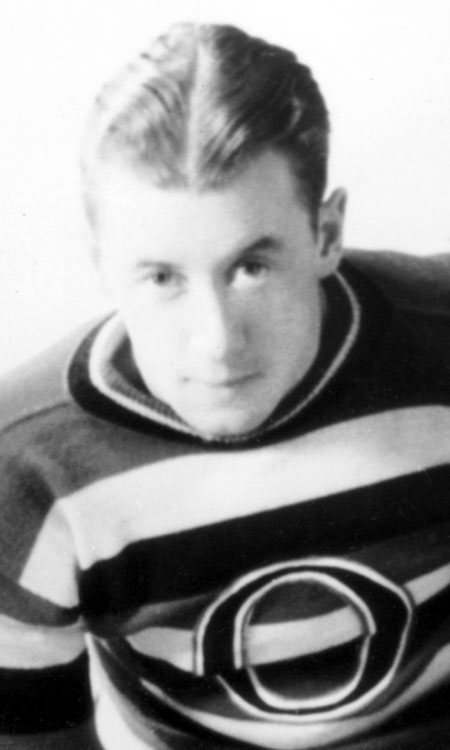 Roche had previously played with the Montreal Maroons and Ottawa Senators. He became a member of the St. Louis Eagles when the Ottawa franchise transferred there prior to the 1934-35 season. On December 4, 1934, Roche was traded to Boston with Max Kaminsky for Joe Lamb. Four days later he was dealt to Montreal.

The third player to wear number 99 for the Canadiens that season was defenseman Leo Bourgeault, who was acquired by Montreal on February 14, 1933. In the trade, the Ottawa Senators sent Bourgeault and Harold Starr to Montreal in exchange for Marty Burke and future considerations which later became forward Nick Wasnie on March 23, 1933. Bourgeault had been with the Canadiens for parts of two seasons when he was called up from the Quebec Castors of the CAHL to suit up four games in Montreal, in which time he wore both the number 12 and 99 jersey. 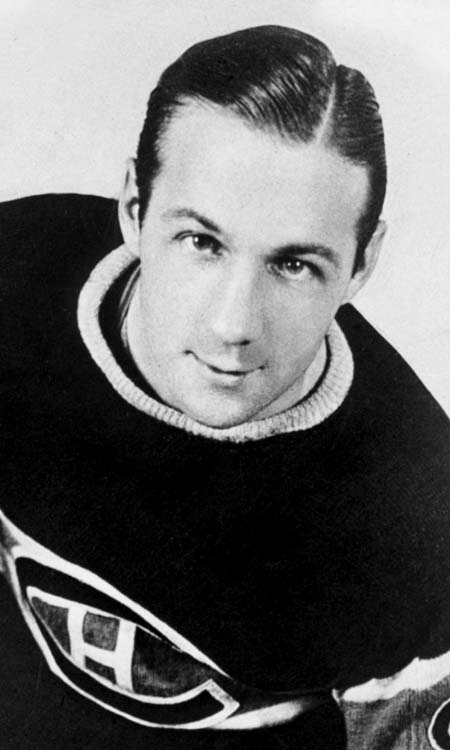 Coincidentally, aside from the first wearing of a number 99 sweater in a hockey game, the November 10 match-up featured two other notable firsts.

The game marked the first contest the Habs played without Howie Morenz as a member of the team. Weeks earlier, the legendary Morenz had been traded to the Chicago Blackhawks, and it could be said that the Canadiens, for a time, were lost without him.

Historically speaking, the game was also significant for featuring the NHL's very first penalty shot, awarded to Montreal's Armand Mondou in the third period of the game. The rule had been brought into play by the league in the off-season.

While it is well known that Mondou did not score on the penalty shot, few people know that Mondou wore the equally wacky (for the time) jersey number 64, as he skated down ice for his solitary groundbreaking breakaway. 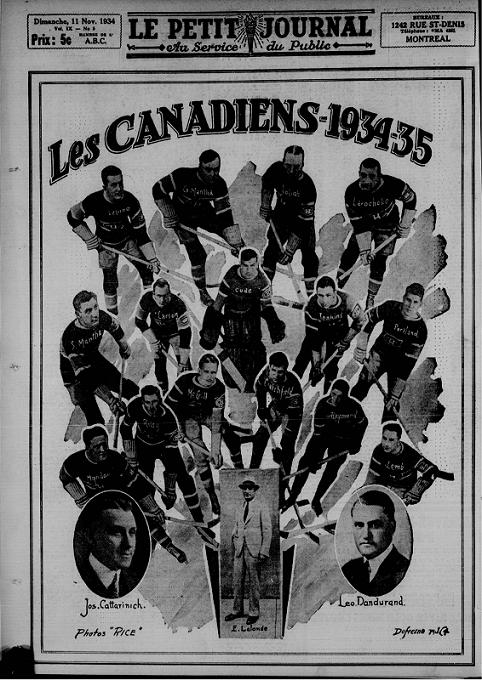 So what's up with those unusually high numbers on a hockey sweater?

Well, other than 64 and 99, the Canadiens also employed numbers 22, 33, 48, 55, 75 and 88 across the back of fourteen players that season, of which only eight were regulars in the lineup. However, the explanation as to why is not exactly clear.

For the record, the 1934-35 Canadiens were a sad sack bunch. The comings and goings on the club were many, but that doesn't explain why high numbers were inaugurated from day one of the season.

Listed below, are the numbers worn by the fourteen players mentioned and their stats that season. The highest number on teams in the mid 1930s usually reached 15 or 16. Notice that several numbers were donned by more than one player, with 75 being worn by four different men.

Perhaps the best accounting of why these numbers were in existence in the first place has to do with Canadiens' coach Newsy Lalonde.

Lalonde at this time was 12 seasons removed from his playing career, and he had returned to the Canadiens as coach starting in 1932-33. A playing coach in his previous incarnation with Montreal, the highly competitive Lalonde wouldn't last the season, calling it quits after a loss on December 29 that had him scrambling for solutions. He may have been the first Canadiens coach to return behind the bench and find only frustration, and he certainly wouldn't be the last.

Newsy lived in Montreal prior to rejoining the coaching ranks of the Canadiens, and in summers starting in 1931, he managed and coached a box lacrosse team called the Montreal Canadiens that played its games at the Montreal Forum.

The sport of box lacrosse had its ups and downs before fizzling out after a few seasons of popularity. At its peak — a four-team league that included the Canadiens, the Toronto Maple Leafs, the Ottawa Senators and the Cornwall Colts — served to bring dollars into NHL arenas during the Great Depression years. 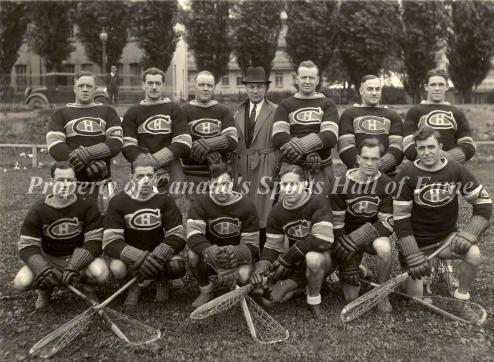 Box lacrosse was essentially outdoor field lacrosse brought indoors into arenas and featured NHL players on their roster. The league went by the ridiculously ambitious moniker of the International Lacrosse League. Within a campaign, it spawned a U.S. counterpart known as the American Box Lacrosse League that featured up to six teams at once, including franchises in New York, Brooklyn, Boston, Baltimore and Toronto and Montreal. Games in this incarnation were played both indoors and outdoors in such places as Yankee Stadium and Fenway Park.

Alas, the novelty of box lacrosse, perhaps due to recessionary times, flickered and faded rapidly.

As the theory goes, in a money-saving measure, the hockey Canadiens basically made good use of the Canadiens lacrosse jerseys with the high numbers that it owned, as they just happened to be sitting around from the game's demise.

Some crumbs to this tale....how Leo Bourgeault passed the Canadiens torch on another generation, a more detailed look at that Habs' box lacrosse team, and if ever it is re-posted, a video from the first box lacrosse game between the Canadiens and Maple Leafs in 1931.