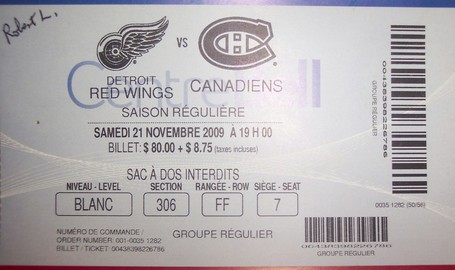 Last night I was in Montreal, taking in the Red Wings / Habs game and prior to setting out I got to pulling out old ticket stubs, and looking back upon games I have taken in, in my lifetime, at the Forum and the Bell Centre.

Now if you have ever been to a Canadiens game at any time in your life, saved your ticket stub and have a scan of it, drop me a line, and send a pic along and I'll see if I can do something with your tale. We all have our unique experiences. Perhaps sharing mine, will inspire you to share yours.

What follows isn't every Canadiens game I have taken in, but simply the stubs I have saved over time. Whether you have taken in a memorable game or an inconsequential one, I'll look up the summary if I can, and check out a few newspaper archives and see if I can help bring that memory back to life.

My first ever Canadiens game at the Forum. I had been in the building a few times before. I'd seen three Shriners' Circuses through at the Forum, and in July 1977, I saw KISS on the Love Gun tour, with Cheap Trick opening.

My Dad and I went to this one, hopping on an organized bus tour to the game. A Canadiens rep, Roger Leger from Molson's, gave Dad the tickets. It's the only Habs game Dad and I ever took in together. Coinidentally, my father also took to my very first hockey game, a Cornwall Royals match-up with Guy Lafleur's Quebec Remparts. Guy scored six goals that night, and made me a Habs fan in the process. 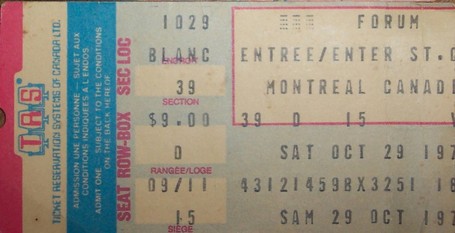 On the bus ride to the Forum, I told my father I didn't care who won the game, as long as Lafleur got a trick. Such a feat wasn't a rare occurance for the Flower in them days. I wouldn't have remembered such a dumbass statement had it not been for the fact that the Canadiens did lose the game, 5-3, with Lafleur getting all three Habs goals in the first period. 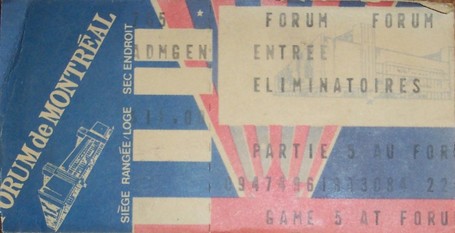 This could be either a playoff game against the Islanders, Nordiques or Whalers. The stub is torn off, so it is hard to tell for certain. My calculated guess has it narrowed down to a few choices. It could be from:

I took in playoff series games in all three of the above, so I'm stumped without a date. That said, the Islanders game is the most vivid of the three. It was a 3-0 win by the Habs, and Mats Naslund's goal, the Canadiens' second, was scored on a breakaway, and literally had the Forum exploding.

The Canadiens recalled Gaston Gingras for this game and he remained up for the rest of the season. The night before, there was a fire across the street at the Alexis-Nihon Plaze on the seventh floor. Fire engines remained on Atwater St. at game time. I thought both these facts were bad omens, but the Habs won 3-0. 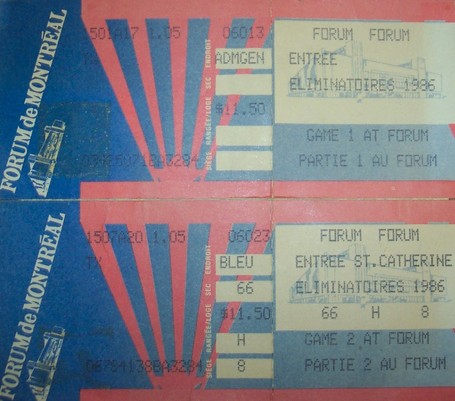 Patrick Roy's first ever playoff games with Montreal were 3-1 and 3-2 victories respectively over Boston. Game 1 was punctuated with fight after fight. It was a rough one. Our tickets for the first game were standing room tickets. On the way out of Game 1, a fan from Boston sold my friend Brian and I the tickets for Game 2. Little did we know we'd sitting among busloads of Bruins fans the next night. We were way up in the blues (greys?) and I was crapped on by Bostonians all game long. It didn't help that Brian was also a Bruins fan. My highlight was the John Kordic destroying of Jay Miller. They had screens that far up where fans could see the TV broadcast, and when Miller came off the Forum ice, he kicked a springloaded exit door on the way to the Bruins dressing room. The door sprung back and knocked him on his ass. The Bruins were quiet after that. 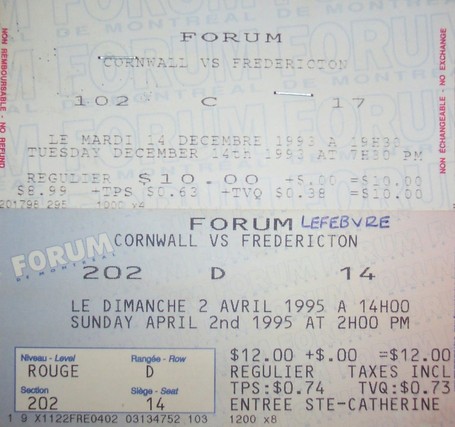 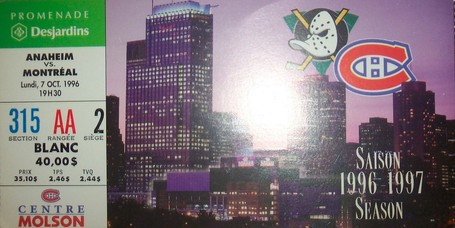 A 6-6 tie and Mr. October, Brian Savage gets a hat trick. 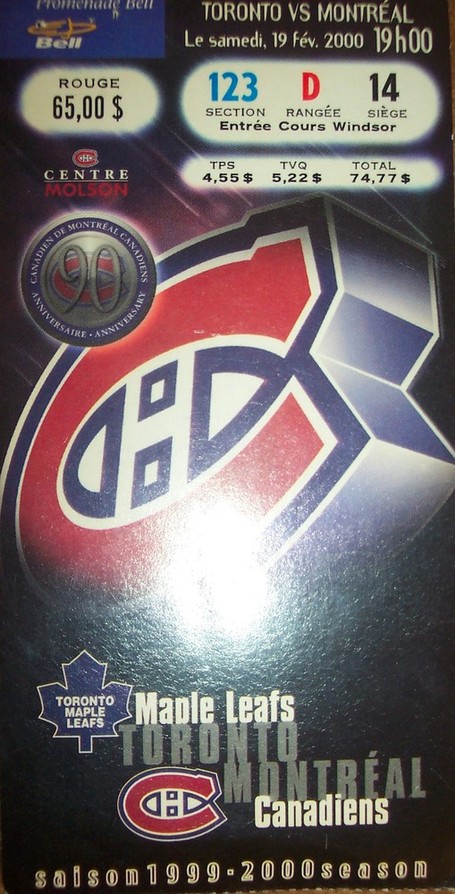 A 2-1 loss to the Islanders would have been totally forgettable had it not been for blowing the engine out of my 1991 Chev Corsica on the Dicairie Expressway.

It was Kid's Day, so I brought along my 9 year old daughter Crystal for this one and she was awestruck by the Bell Centre. Our seats were in the first row of the top rung and she's afraid of heights! Told her to keep an eye on Kovalchuk, but he slept through this one. Final score: 5-1 Habs!