Habs Surprise Capitals In A Wild One

Share All sharing options for: Habs Surprise Capitals In A Wild One 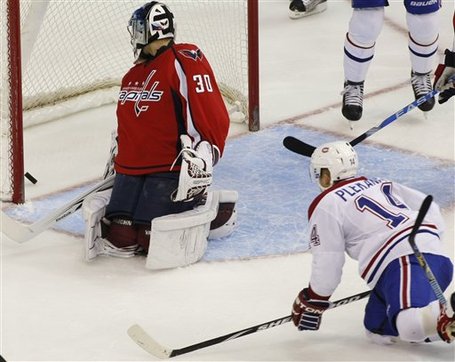 What a finish! What a frantic final few minutes! What a wild game!

I'm scrambling for adjectives, wondering where this effort came from, while my heart beats like the intro to "Hot For Teacher".

Not a moment too soon?

A horseshoe up their patoot?

Whatever overused sports cliche you chose, this was one exciting to the end horn nailbiter, and anyway you slice it, it was a big game for the Habs.

I'm just thankful finally for something that makes me feel like writing, thinking and typing again.

But this was one inspirational game for a number reasons. It's been a while since I've said this.....where do I start?

Tomas Plekanec....on a so-so team, this guy is looking more and more like a team MVP. In on all three of the Habs' goals once again, Pleks is playing instinctive, tuned-in hockey, and looks like a seasoned veteran out there. he's quite possibly having a better year than in 2007-08. Sign the guy, damnit!

Carey Price....the Capitals excel at what Price is suspect at, which is playing great cross ice hockey. Washington makes a goalie work, using every inch of the rink to move pucks around. Price was alert as beanie and the Canadiens defense allowed him to remain composed. Carey is on the way to earning, make that re-earning, the superlatives set to come his way. 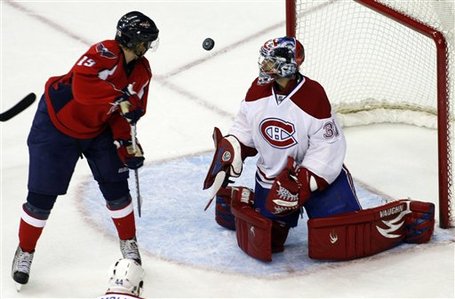 Jaroslav Spacek....the less I notice him, the better he's playing. Unspectacular, but very sound, Spacek does all the simple things right. Last night, with Alex Ovechkin as an assignment, Spacek was stellar in reducing his time and space. It doesn't hurt that his partner is the similarly talented Roman Hamrlik, and they form a mindset as much as they do a pairing. As both as used for big minutes against key players, it sure helps when the forwards lighten their workload by being defensively aware.

Jacques Martin.... a total guess on my part, but it looks to me like he came armed with a killer game plan and was able to sell it to his troops. The Capitals offense is fire, brimstone, and high risk. Contain them and play safe, and Washington will give you chances to beat them with their high risk / high reward style. Last night, Montreal jumped all over the Caps mistakes and profited to take a 3-1 lead late into the game. If the Habs weren't so snake bitten (Hello, Max P!) around the net, this one might have been over sooner.

Travis Moen....when he was signed last summer, the talk was about his limitations. A quarter way into the season and he's on pace for 20 goals. There's an upside on Moen, and who knew?

Plekanec again....he's leading the team in scoring, without the benefit of regular linemates. I keep thinking about that, and on that regard....

Andrei Kostitsyn and Max Pacioretty....looks like they are becoming accustomed to Pleks, as they seem to be learning what it takes to play alongside him. Kostitsyn did all kinds of good things in this game, and the majority of them came without the puck or fighting for possession of it. Max is using his size again, a key to his game, and is maintaining that while getting scoring chances. For both, it's an evolutionary process, but if the two use their bulk on Plekanec's flanks, this line could gel into something special.

Scott Gomez....left the game and didn't play the third period. I hate to say it, but I've gotten so used to not noticing him....ah, I'm in too good a mood to gripe!

I'm taking part in the third annual Habs' Fans Summit tomorrow in Montreal, and I was dreading the Canadiens facing Detroit. I'm a little less worried after this effort. Might just be superstition on my part, being that both Guy Lafleur and Patrick Roy played their last games as Canadiens against the Red Wings, but I'm comforted by the fact that at least the Habs won't be looking much like themselves tomorrow, as they are set to unveil for the first time, the 1909-10 retro jerseys that look like a cross between the old Nordiques powder blues and a Conservative Party hockey jersey.