Time For Max And Guillaume To Get It Going

Share All sharing options for: Time For Max And Guillaume To Get It Going 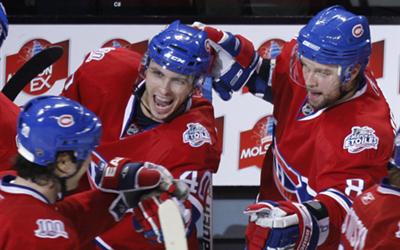 One thing that we have all learned about Jacques Martin so far is that he goes with a winning hand. A goalie wins and he stays put. The team wins and the line combos that produce remain unchanged.

After the all eggs in one basket combo of the Giant Mexican Squid Line (copyright FHF), secondary scoring becomes a concern. The top 4 forwards are easily identified, but the consistent Tomas Plekanec’s flank changes game by game. Against Toronto, things seemed to finally start clicking with Maxim Lapierre and Guillaume Latendresse. It is an interesting trio.

Max and Guillaume have shown in the past that they have a certain cohesiveness and the ability to feed off one another. Gelling them with Plekanec, who’s arguably been the Canadiens’ best player this season might be an idea deserving of more than a one game trial.

Plekanec has had everyone on his wing thus far this season, but he has never had this much grit to shore him up. How he’s managed to remain consistent is a mystery, and it’s thought that if his line were to stabilize, nothing but good things would come from it.

One thing is certain, Lapierre and Latendresse will never get a better shot, with a more compatible center, at becoming top six forwards. With Plekanec, at pivot who plays to his wings’ strengths, it’s up to them to seize the moment.

The flipside of this story is that Andrei Kostitsyn is bound to be pissed. You can practically hear it in his barely audible English interview from Habs Inside Out. He is not happy. This could either motivate him or further confuse him in terms of instruction. The trouble is, he has made no argument in his defense with a coach would sticks with what works.