Share All sharing options for: Carey Price's Record Tying Performance Under The Microscope 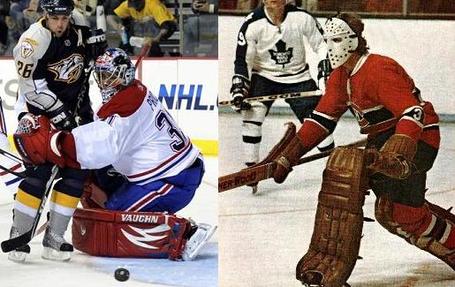 Seven days ago, Chris Boyle's in depth analysis of the Canadiens goaltenders was a true eye opener on several fronts. Following Carey Price's record tying performance last night in Nashville, I asked Chris if he would put this one game under his microscope so we could all have a similar analysis on how good a game Price played. Down below, the graphs illustrate the story of Saturday's game quite clearly. Following Chris' take, there is a historical recap on where Price's marks fit in with other great one game performances in the team's history.

In the order of shots on goal, shots blocked and missed shots. 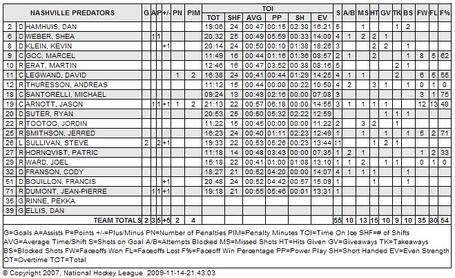 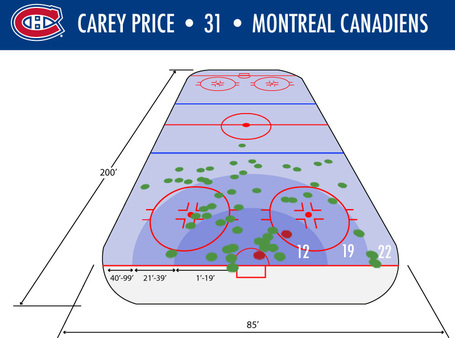 Price stopped all 41 shots directed at him from a distance of more than 20 feet out. Of 14 chances within the 20 foot parameter, Sullivan beat Price in close at the crease's lip and from 15 feet out on a rebound, uncovered both times.

Price faced 6 shots registered from less than 10 feet, which according to NHL.com gamelogs, is a total that Tim Thomas took 6 games to register. 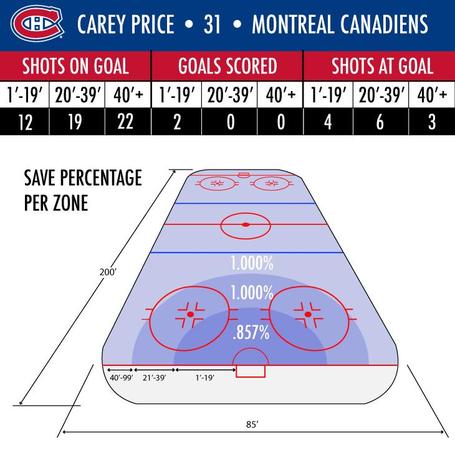 Prior to Saturday's game against Montreal, Steve Sullivan had 2 goals and 3 assists in 17 games for the NHL's lowest scoring team. His 11 shots in this game bring his season total to 41. 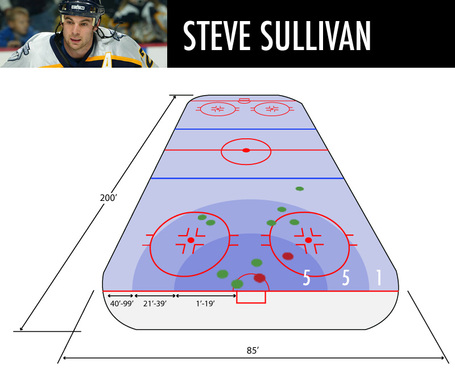 I was reminded of Dryden while watching this game. Not because of Price's goaltending, but because I thought I saw the 6'5" Pekka Rinne engaged in his classic pose watching all the action.

In regards to the Nashville game, I found the following article at Puck Prospects.com very interesting.

In the "more shots" category, I was not surprised to find Nashville and Florida. I’ve always found something fishy about Florida’s inflated shot totals, both during the old Luongo days and more recently with Vokoun. Likewise, Nashville always seems to have a goaltender with a 0.920 save percentage (Tomas Vokoun, Chris Mason, Dan Ellis and Pekka Rinne). Though the most remarkable bias comes on the "less shots" side and is found, unsurprisingly, in New Jersey.

As soon as I saw the first period shot totals I thought of this article from Tom Awad that discussed that Nashville has a tendency to overreport shot totals. Also, Boone referenced it in his live game log when he said NHL.com had registered 17 shots, while RDS was reporting 21. It is an interesting tidbit considering the circumstance.

Also the game in question in which Price almost broke the record for shots faced was March 10, 1974. Wayne Thomas was in goal and faced 57 shots against the Penguins in a 5-4 Win (23 in the first period, 15 in the second, 19 in the third) 2 goals in the first, 1 in the next 2 periods. Gary Innes was in goal for the Pens and gave up 5 goals on 18 shots! 1st period the Habs had 8 shots and 3 goals, followed by 5 shots and 1 goal in each of the next 2 periods.

A look at Price's saves against Nashville from Chris' You Tube compilation.

For a historical point of view, here is a look back on other noteworthy performances by Canadiens goaltenders. For time and perspective, make use of the hyperlinks provided.

Most Shots On Goal Against - One Game: 57 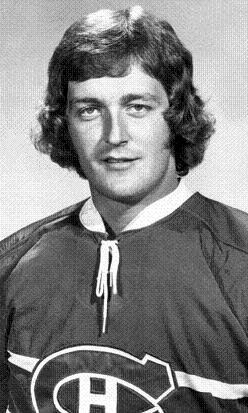 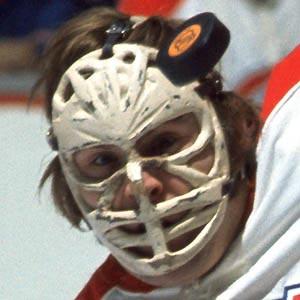 With the performance against Nashville, Carey Price now owns or shares six Canadiens goaltending records including the two listed above. 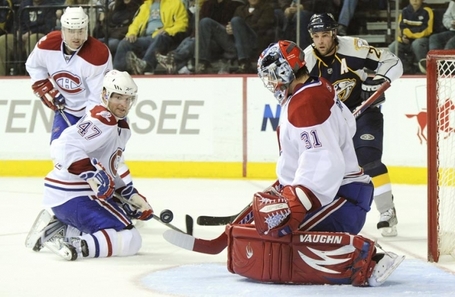 Most Shots Faced In One Shootout: 8

Most Saves In One Shootout: 8

Most Shootout Shots Faced In One Season:

Most Shootout Saves In One Season:

For more on this game from the Nashville Predators angle, check out On the Forecheck.