Share All sharing options for: Time To Reward Inspirational Plekanec 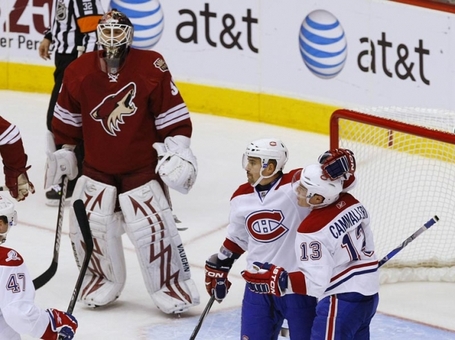 Watching the Habs pull one off against the Coyotes last night, I felt an odd twinge of interest I had not felt so far this season.

It wasn't because the Canadiens were ahead in this game, or because Carey Price seemed to be on top of things, it was because I felt I finally had a new favorite player on the team.

I know this feeling and remember it well because I start to feel excitement at every shift. It's like, "Oh good, he's on the ice!", or even, "I think he's coming on next, what's gonna happen now?"

I enjoy that feeling tremendously and I've felt it building for a few games now. The good news about that is that it is making me feel like the fan I want to feel like again.

The player, my new fave, is Tomas Plekanec.

I know what some of you will be thinking. Last year I was a little rough on him. Then again, he was rough on himself. Nodoby's kidding anyone when saying his off year was really a downer.

Now, I'm starting to realize that maybe I was simply critiquing Plekanec as much as I was bemoaning the fact that he'd become a shadow of himself.

It hurt to watch him go at times last season, and his wounds (if he had any) could almost be felt by his fans as he sunk.

Coming into this season, Bob Gainey awarded him a hefty contract increase at a time when many felt he might even be expendable. There was serious concern that he might not rebound from that woeful campaign.

It did not take long this season to erase those concerns. Plekanec has been more than his old self, dutifully going about reinstating all that he has been as a player through his Canadiens career, but he actually seems to have taken on more responsability. It's hard to pinpoint exactly why I see this, but he seems to me to be a player that plays for his teammates.

Against Phoenix last night, he was simply awesome. He did it all, setting up three goals with great passes and inspriring his troops to victory. The manner in which he found the open mates at precisely the right moment was not instinct nor luck - he was simply tuned in.

It was beautiful to watch in fact.

How good has Plekanec been?

He leads team in assists despite not having regular line mates. When it is mentioned that the team lacks secondary scoring, it's hardly Pleks' fault, he's set just about everyone thus far. Despite inconsistent linemates, he's been the team's most consistent element.

From everyone bemoaning his play last season, as well as his new contract, to today, great leaps have been made by the player. He knew he had a bad season and has gone about seeing that it does not reoccur.

In his "About Last Night..." column, Mike Boone rightfully pointed out what needs to be done in regards to Plekanec. Boone was succinct:

Far be it from me to tell Bob Gainey how to do his job.But I swear to God, if the Canadiens general manager lets Tomas Plekanec go the way of Sheldon Souray and Mark Streit, I'm becoming a curling blogger.

Has Pleks, with a succession of linemates, played a bad shift since the season began?

Not that I can remember.

Three assists last night – and 200 points in his career. Excellent on the power play and shorthanded.....I know: Team policy is no negotiating during the season. That policy was fine when there was no free agency, Bob. There were no player agents (any Tweets about Carey Price tonight, Walsh?), and the Canadiens' had Flying Frenchmen who flew for $25,000 a season....Sign him, Bob. Three to five years, for decent bread. Maybe the fiddles and pedal steels, twanging dobros and heartbreaking ballads (of Nashville) ....will persuade Bob not to take any chances on losing a guy who no longer plays like a girl.

The new contract Boone proposes, was on my mind and then some last night.

I think Plekanec should also be the team's next captain.

His attributes are many...

He's a two way player, who is used on all units.

He needs no one to take him to task when his effort wanes, he recognizes it.

He quietly leads by example and will surely be no cause of any drama.

He's the second longest tenured player in the organization now, after Andrei Markov.

By all appearance, he deals well with the media, the fans and teammates.

I'll go on a wicked stretch here, but he has Beliveau-like qualities.

There are no shenanigans with Pleks. He'll never be confused with a prime donna.

The look on his face on ice is always of serious. His glare says he has a job to do.

No rumours, no discontent, no whining. Other than a sub par season inwhich he was constantly the subject of rumours, his consistency has been without reproach.

As a player who has come up in the organization, from the minors to the big clubs, he's earned and taken every step. That's key in a leader, especially on this team and at this particular time.

The Canadiens have some interesting new players, but if one were to be named the captain, it can present a problem. Younger kids are being called up constantly it seems. Upon arrival in Montreal, they may ask something along the lines of, "How do things work with these Montreal Canadiens?", to which a newcomer could honestly say, "Dunno, just got here kid!"

Plekanec can say, "Listen rook, I came up the same way you did through this organization. This has been the way in which they have done things for some time now. Take it easy on yourself and have patience. This organization offers opportunity, recognizes effort and rewards and recalls contribution. Relax and enjoy the ride."

Tomas Plekanec has never been an assistant captain.

For that matter neither was Jean Beliveau.

A new contract extension and a letter. It couldn't happen to a more deserving player, one who plays for his teammates.