Why Halak Three Games In?

Share All sharing options for: Why Halak Three Games In? 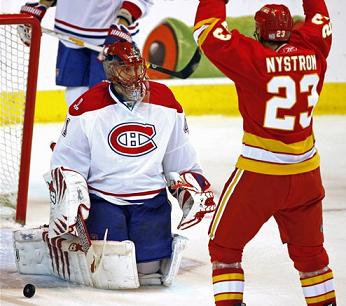 If someone had said prior to Habs / Flames tilt that the Canadiens would outshoot Calgary and limit them to 28 shots after allowing both Toronto and Buffalo to top 40 in the first two games, you would figure the Canadiens chances of winning would greatly increase.

Yup, this team promises to be a hard one to figure.

It starts with winning a pair of games they have no business winning. After losing Markov in the opener and O'Byrne a period into the second game, they limit the Sabres to a goal and pull a second one out of the fire.

While many facets of the Habs game is still in the flux stage, one can see that certain elements are coming together. In those wins, big time credit goes to Carey Price and the defensemen clearing his crease. A goaltender in his zone does alot to hinder opposing shooters, who begin to hesitate, waiting for perfect scoring opportunities. Price, two games in, is looking very much like a goalie who can get into shooter's heads.

So what do the Canadiens and Jacques Martin do?

With games on back to back nights, the Habs choose to rest up Price and play him in Vancouver in front of family and friends instead. I'll never understand these types of decisions as long as I live.

This is the third game of the season, and the hot goalie needs to rest up?

After two days off, a number one cannot play two nights back to back?

A goaltender's play will inform when he needs a rest.

This is not at all about Jaroslav Halak - who is a fine goaltender - it is about getting into an early season groove, smack in the middle of a five game road trip, as defensemen are falling like flies.

Consider the momentum the Canadiens would have gained with three wins to start the season despite the conspiring elements against it.

Imagine that by banking on the element has worked best thus far, the Habs extend themselves to 4-0 to start the season. Imagine the confidence it would have created!

No, let's tinker with the mix. Gotta get the backup goaltender into some games. That's the priority.

Of course, we'll never know if the Canadiens would have pulled off a win with Price in goal. Halak for all intents is quite capable, played extremely well in the pre-season games, and has a reputation for excelling when shot totals rise.

By keeping the shots down in Calgary, Halak's chances were good. A pair of goals that beat him were hardly his fault. The way Price has been playing combined with his size, puts bets in his corner.

Again, why mess with the mix?

Some of the bigger questions coming into this season concerned Price, pressure and confidence. Is it too soon to get those answers.

I want them now, and I want to be reassured.