Share All sharing options for: Price And Depleted Defense Stand Tall As Habs Squeak By Sabres 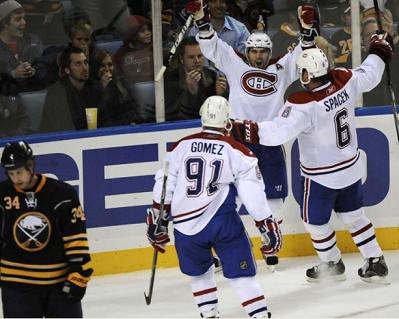 For a second consecutive game, the Canadiens have come from behind to win in overtime, leaving their hosts looking for the bandit on both occasions.

Credit both wins to a rejuvenated Carey Price, and a defense corps that is helping to clear the front of his net and facilitate his workload.

Considering that this team is a chemistry experiment that is still bubbling in its test tube, that it is beginning its existence on the road, and that it is losing parts as it learn to fly, the criticisms of what it is not yet doing properly should not be too harsh.

Everyone understands that it is going to take some time and games for this club to truly become what it is to be. That fate has tasked it with an early character test will either derail it soon enough or serve to bond and better it by forcing everyone aboard to dig deep and dig often.

After Andrei Markov's severed tendon in game one, Glen Metropolit and Ryan O'Byrne left the game with upper body and lower body injuries respectively. Both had been playing very well. That makes three players going down to injury in two games, and at this rate they will have called up the entire Hamilton Bulldogs roster by the seventh game to replace the walking wounded.

Nevertheless, they have four points to show for their efforts in two road games in which they have been badly outshot. Each win has come in overtime.

What I cannot decide is, two wins later, are this bunch lucky or unlucky. 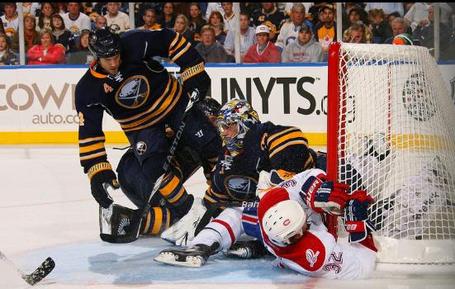 To be both fair and honest, the cohesion and chemistry on the ice is badly out of whack so far. The forwards are having trouble reading the defensemen on breakout plays. The neutral zone coverage is almost inexistant, which is causing the Canadiens to play 75% of the game in their own zone as if playing on a tilted surface. In the offensive zone, there are so many new pieces to the puzzle that no one seems to know where to go, where to be, and where to find each other.

As mentioned, much of that is understandable for the moment. It makes one wonder whether the compressed exhibition schedule of five games in five nights was such a good idea. One gets the feeling that Jacques Martin would have liked to have more time to instill his system into his player's heads and habits.

Against Buffalo, a pattern similar to the Toronto game was apparent early. The defensemen, playing tight to Price, were allowing all variety of perimeter shots while the forwards were being outhustled by the speedier Sabres forwards along the boards. Puck possession was almost nil for Montreal as Buffalo ran up the shots on goal total.

Much of what was fired at Price early was far from the dangerous variety and rebounds were for the most part easily cleared or handled. When good scoring opportunities presented themselves, Price was alert and well positioned for the save. In two games thus far, he is making what looked at times to be excruciatingly difficult last season, seems almost routine at present.

While the Sabres and Leafs offense surely do not present the same challenges to Price as those of the Penguins, Capitals, Red Wings and Bruins, the good start is a confidence builder. It's only two games, but a .951 save percentage and a 1.89 GAA speak well for what can be accomplished when goaltender and D-men are in sync. Once the forwards find their step and bring some synchronicity to the coverage, the shots totals will decline and the time of puck possession will increase. 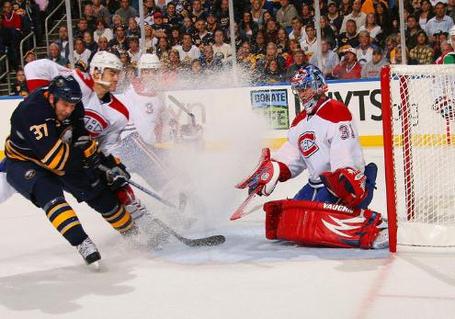 It is often said that contending clubs are built from the net out. Presently, with the loss of Markov and now O'Byrne, and the offseason departures of four defensemen, the Canadiens game plan will need reconstructing from the net out.

The Habs backline will rarely be spectacular until Markov's return, but it can become efficient. Able and experinced vets such as Roman Hamrlik, Jaroslav Spacek, Paul Mara and Hal Gill can contribute greatly by keeping things simplified and maintaining their composure. Josh Gorges has played like a ten year vet the past two game, which can only be reassuring.

It's only taken a few games to arrive at the notion, if we didn't already know, that Hal Gill's skills have their limitations. Listening to former coach Pat Burns the other day, he shed some interesting points on how to maximize Gill's size and skill assets. Burns, who coached Gill in Boston for a few seasons, said that Gill always worked best when assigned a particular task, such as being given one player to cover at all times. Burns testified that Gill used to give Jaromir Jagr fits game in and out, simply by laying on the stick, body, reach and attitude at every turn. Burns said that Gill was so efficient in the one on one task, that Jagr would spend the game whinning to officials. 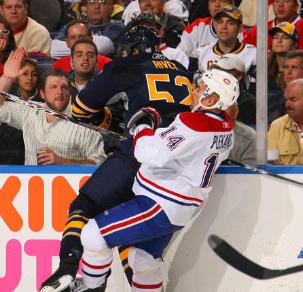 While the defensemen are doing their duty, for Martin, the next step to work on will involve the Habs forwards winning more puck battles in their own zone. Again, perhaps due to the newness of players and a different system, many Habs forwards seems reactionary rather than instinctive. They are watching things happen instead of making them happen, and it shows. It is an evolutionary process to mold a team into a new style of play, and for Martin as a new coach, he must tread the fine line between instructing and berating. The last thing a new coach wants to do is alienate participants early in selling his system. It will all come together, one game at a time. As long as things progress and improve, the transition will go smoothly.

In the season's first two games, several Habs have put in noteworthy performances and helped the club to its 2-0 record. A few words on some that have caught my eye:

Tomas Plekanec: Has displayed that instinctiveness over reactiveness mentioned above that had made him a favorite of mine up until last season. He has been poised and confident in all assignments, and considering that his wingers, Kostitsyn and Pacioretty, has been AWOL thus far, is not overextending himself offensively to the detriment of the team concept. I see him becoming a Martin favorite.

Josh Gorges: Have you noticed the maturity on his game? As a young veteran on the team, his play seems to have blossomed to the point where he now has the confidence to attempt things he wouldn't have last season. The pinch for his OT game winner in Toronto was one. He ably handled another pinch play in a similar fashion against Buffalo that almost resulted in a goal. During a man advantage, there was a cross ice pass to Cammalleri, a la Markov to Kovalev, that I'd never seen him try before. Had the recipient not been so surprised, it might just have clicked. 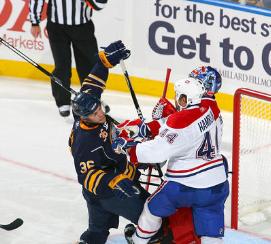 Roman Hamrlik: There's nothing like a veteran presence to calm the troops. Hamrlik was this game's savior in a sense, stepping in as Markov went down, and performing up to standard. The fear was that he would be running around, attempting to do too much, but instead he was simply where he needed to be all game long. It was subtle, and essential, to the Habs not coming apart at the seams in light of the Markov injury.

Brian Gionta: Sparkplug. Little stick of dynamite. Call him what you will, this guy is a winner and the Habs next captain. He throws everything he has into every facet of his game. He's a pest, always in pursuit of an opportunity, relentlessly in creation. The more I see him play, the more I see an everyman sense about him. He's Theo Fleury minus the pomp.

Maxim Lapierre: Has improved in every game since exhibition and is starting to find his groove from last season. It's in the little details. Things like anticipation and agitation. Perhaps it was playing with Moen more than D' Agostini that brought out his natural elements in last night's game. It's all in the fiesty quotient. If you notice Max, it's because he's playing well. If he hasn't left an impression, it's because he was off.

Travis Moen: Two goals in two games; who woulda thunk it! Hardly spectacular, he's doing all kinds of good things out there and making his physical presence felt. Could this guy achieve 15 or 20 goals? Maybe. One thing that is promising is that he certainly looks like a player that brings it everynight. Can't ever have enough of those.

Photos courtsey of Habs Inside Out and Montreal Canadiens.com.

Die By The Blade