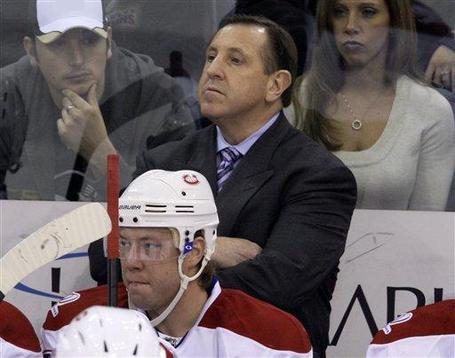 I forget the name of that Steve Martin movie in which the grandmother makes a brilliant life analogy with a distinction between ferris wheels and rollercoasters, but it came to mind watching the Canadiens as they fell behind 2-0 in the second period against Chicago.

Ferris wheels simply go round and round. The Canadiens spin their wheels.

Rollercoasters aren't as predictable, but all the thrills are associated with not knowing what's around the corner. These Habs seem afraid of the dark.

Montreal's four game win streak of a week ago was enjoyable while it lasted and it showed some positive flashes at times, mostly against weak opponents, the Rangers notwithstanding. However, there is little to rejoice over in retrospect, as narrowly beating the Islanders and Thrashers is never a boast to beat one's chest over.

The other two of the four wins are in no impressive context either.

The 5-1 win over Long Island showed that the Habs can put the boot to a tired and weakened foe playing twice in 48 hours, the 5-4 win over the Rangers served notice that the Canadiens aren't a team to fall asleep against at home.

On the road, where good teams win hockey games, it is a whole other trial for the Canadiens.

Evidence of a trend can be found in three particular games, namely the losses in Vancouver, Pittsbugh and Chicago. In all three, the Canadiens were consistently outworked and outmuscled in the trenches. While players such Brian Gionta, Tomas Plekanec and Josh Gorges spare no effort game in and game out, the Habs simply don't have enough warriors of the skilled variety to take down elite clubs.

Gritty forwards such as Travis Moen and Glen Metropolit can bring it all they want every game, but how often is it going to be a difference maker against the deeper teams. Against the Penguins, this line runs up against Jordan Staal's line, against the Bruins they'll face Patrice Bergeron, in Washington they see Brendan Morrison or Brooks Laich and in Buffalo it's Paul Gaustad.

What's most concerning in road games is how easily the neutral zone seems to disappear for Scott Gomez. In Montreal, where Martin can get the matchups more often than not, Gomez' puck time is greatly increased, but it's not the case on the road, where a covered Gomez equates a neutralized Gionta and Mike Cammalleri.

Further worrisome for top line forwards on the road comes with the puck possession issues as Cammalleri, and Kostitsyn in his place last night, are not strong on loose pucks. Gionta is more the battler of the three, and would seem more effective with Plekanec, but if he is consistently removed from Gomez' side, there isn't much spike left to Habs top line.

A close examination of road games shows that the Canadiens have yet to dominate and win away from home. In two wins against Toronto and Buffalo - both in OT - they were greatly outplayed both times, hung on because Carey Price was stellar, and pounced on opportunity in four on four overtime. That scenario, with Price holding his own, almost played out again in Chicago, until Price allowed one he should have had late in the third.

The Canadiens best road showing remains the loss in Edmonton, where two teams who enjoy a freewheeling style went head to head. Nikolai Khabibulin was the difference that night, just as Price was in the first two games.

The Canadiens in Chicago weren't terrible by any means, but I've touched on the notion that their best might often not be good enough before. How would this game have played out at 2-0 had Jonathan Toews been in the lineup? Before Cammalleri's goal, it looked as though another Vancouver or Pittsburgh style rout was a goal away.

Montreal, in Martin's system, showed it is capable of playing shutdown hockey to some extent, but it goes against the nature of some of the team's instinct. Can it be consistently expected that talented players - I'll name only Kostitsyn and Cammalleri - continuously, shift after suffocating shift, sacrifice their games to fit the system?

The project of turning Maxim Lapierre into a gritty right winger for Plekanec hasn't been a rousing success. He's been merely operative in the first few games there, and I'm convinced that he and Metropolit are better third and fourth pivots than Metro and Kyle Chipchura are slotted down one. To me, Kyle as Metro's wingman is more sensible that Max as Plek's sidekick.

Until Andrei Markov returns and makes everyone he's on the ice with better, what hope is there for the Habs on the road against the tougher teams?

If we're left to expecting Carey Price to be otherworldly away from home to get wins, it's quite a strain. It seems he has to be near perfect to give the team a chance, and that's not a heck of alot to build on. Price, a pair of weaks goals and all, was all the Habs had going for them last night.

Despite all the allure of potential offensive weaponry, the mix just doesn't seem to allow it to unload. This team should be thrilled to remain in the hunt for eighth place even after Markov returns. Until it is proven otherwise, these retooled Canadiens are a two goal, up and down, .500 hockey club at best.