Share All sharing options for: Habs And Hawks Always A Special Game 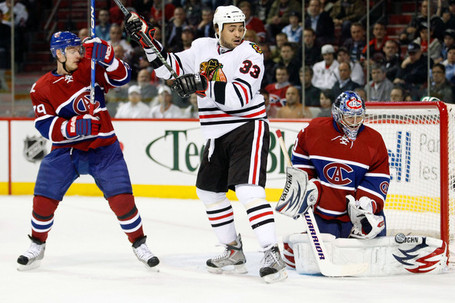 Once a year will never be enough!

Each season, one game that is always of particular interest to me is the lone Canadiens / Blackhawks tilt on the schedule. While the Habs get to play the Leafs and Bruins a half dozen times a season, and play another 4 times against the Rangers, games against Detroit and Chicago, two great old time Original Six rivals, are too few and far between.

One just doesn't do it.

While it can never be the same again, I'm in that group of fans that thought a 21 team league seemed a perfect balance. There were 20 opponents for every club, four games against each, two home and two away. Everything was even.

Players played against the same foes the same number of times as other players, and the scoring race was always fair. There's was no such thought of an elite player getting 12 to 16 games against some deadbeat club to powder their stats. The same thing went for teams, as every club played the elite and the weak equally and when it came to playoff time, the good teams tended to hang around longer with the 1 against 16, 2 against 15 format.

There's was none of this manufactured parity bullshit of today that promoted anti-hockey skills such as traps and stuff.

Last season, the Canadiens and Hawks met in Montreal on March 31 and the game resulted in 4-1 win for the Habs. Chicago were a strong club on the rise last season, while Montreal were spitting oil. Guillaume Latendresse, Alex Kovalev, Andrei Markov and Mathieu Schneider scored for Montreal and Carey Price, who gets the start tonight, stopped 28 of 29 shots and was the game's first star. A repeat performace from Price would be sweet!

A recap of last season's game is available here from NHL.com. 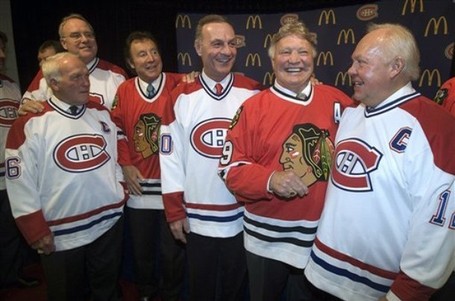 Part of the reason I love Blackhawks games so much has alot to do with the 1971 and 1973 Cup finals that were battled out between the clubs. Anyone recalling either knows they were classics.

As this meeting is the sole date between the Habs and Hawks this season, this is the only opportunity I'll have to run by the 2 audio clips from games One and Six of th 1973 final that were posted here last season.

The links to the audio are contained within the three posts below.

I hope you enjoy them.