Share All sharing options for: Penguins Make A Quick Meal Of Habs 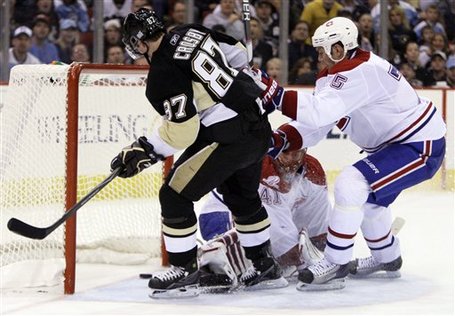 A measuring stick. A litmus test. A reality check.

Whenever a team in full morphosis is matched against la creme de la creme in sport, there's always the obligatory analogies pre-game that render the contest a trial run of sorts.

How the surging Canadiens would measure up against the Stanley Cups champs, who are looking like a threat to repeat, was more than just the underlying story at puck drop, it is also the epitaph post game.

Should it a surprise that the Habs and Penguins appear to be world's apart?

It shouldn't be. The Pens are a killer team, while the Canadiens are into the early stages of identity discovery, minus their best player - Andrei Markov - to boot.

Take some comfort in the fact that was Game 12 and not Game 82.

In the ensuing 70 game interim, much will pass under the bridge, be learned and filed away. The present reality is simply that you cannot make mistakes against a team as talented as Pittsburgh, for they will make you pay at the slightest indiscretion.

And the Habs gave the Penguins plenty to chew them up with.

The unofficial nickname of the Habs' top line, the Seafood Fiesta, comprised of two shrimps and some squid, just happens to be les pingouin's favorite diet.

After a first period where play was kept reasonably even, things came rapidly undone when the Penguins made it 2-0 five minutes into the second period.

The Canadiens had a good start and the edge in chances early in the first, but Sidney Crosby's first of three hurt big time, and immediately started the shift in momentum. From then on, the Canadiens seemed to be pressing.

That first Pens' goal was a classic display of bungled miscommunication and testbook blown coverage as three Habs sought to cover Bill Guerin, leaving Crosby open at side of Jaroslav Halak.

The trouble was, when all those Habs were drawn to Guerin, the puck was twelve feet above his head!

Crosby, in scoring three, had nine shots on goal. With no Markov to help neutralize him, it's obvious the Roman Hamrlik / Jaroslav Spacek duo weren't up to snuff. The duo were on for four Pittsburgh goals, including two on the powerplay.

The end story is that the Canadiens could not outmuscle the Penguins for the puck, were sloppy in transition, turned the puck over without much fight, and were easy prey once pressured by the Penguins attack. Indisciple was also an issue.

Hal Gill, notorious for brutal puck handling, gave Pittsburgh fans a pair a gratuitus souvenirs. Consider for a moment, the upgrade it will be once he is dropped from the lineup and replaced by Markov.

I dread harping on about a player not in the lineup, but Markov not being there robs the speedy Canadiens of so much composure. All the skilled guys miss his poise. Actually, they never had a chance this season to get used to it. What's missed, are those beeline passes that offer the recipient those extra split seconds that allow their plays to be unrushed.

But then, many of these issues were anticipated with such an overall, and it will be brought up many more times before all is resolved. It's a chemistry experiment, and a few more shakes of the test tube will be in order.