Joe Malone may have saved the Habs from extinction in 1918

Share All sharing options for: Joe Malone may have saved the Habs from extinction in 1918 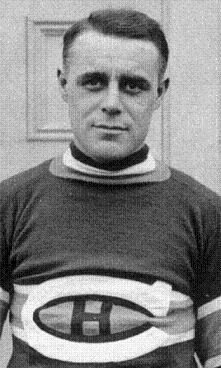 In the far reaching annals of Montreal Canadiens history, Joe Malone is a somewhat mysterious figure, one who often doesn't come immediately to mind when pondering the best of the Habs' many greats.

Malone is passed over in the long shadow cast by the multitude of icons, simply because he had but one remarkable season in a Canadiens uniform of the four campaigns he spent in Montreal between 1917 and 1924.

He is best remembered for a record-setting 44 goal season in 1917-18, the NHL's first, and not only was Malone's season an astounding one, it was also perfectly timed as one could be left to wonder what would have become of the Canadiens' franchise had he not arrived on the scene at what would turn out to be such a pivotal moment.

As hockey lore tells, "Phantom" Joe's mark stood unchallenged until 1945, when Rocket Richard bested the total with a 50 goal in 50 game season. Malone reached his peak season when the NHL played a 20 game campaign, and his 2.2 goals per game ratio is safe and sound in today's modern era.

The implications of Malone's record setting mark back in the 1917-18 had far more reaching consequences than establishing a simple unheard of dream season total. He may just have helped the Canadiens to continue it's existence, in a pivotal season along its 100 year course.

To set the scene, a trip back in time is required, to a day when the Montreal Canadiens were not yet the hockey institution they are today.

From 1912 to 1920, Malone was hockey's greatest marksman, a skilled centerman blessed with grace, skill and a blistering shot. Born in Quebec City in 1890, Malone's given names were Maurice Joseph Malone, and his rise to hockey prominence preceded the formation of the National Hockey Association, the NHL's precursor and hockey's second professional league which debuted in 1909.

Malone was not a big player in the NHA's first season, although he scored 5 goals in 3 games with the Quebec Bulldogs in 1909-10. Malone began his first professional season as a member the Bulldogs but later signed with the OPHL Waterloo Colts, before finding his way back to his hometown team the following winter. 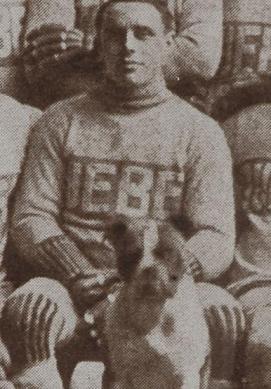 During the next three seasons in Quebec City, Malone tallied 9, 21, and 43 goals in successive campaigns, leading the Bulldogs to the Stanley Cup in 1912 and 1913. In his ninth season with Quebec, Malone neared his career best, with a 41 goal season, as the Bulldogs on and off ice fortunes waned.

Malone at the time, was the greatest goalscorer the game had ever seen. His swift skating and elusive style made him both difficult to stop and a threat to score each time he gain the puck in the offensive zone. Any hockey club would have been thrilled to own his rights.

By 1917, the ravages of the first World War had complicated professional hockey's existence. That reality was but one of many factors playing into the NHA downsizing and evolving into the NHL that autumn. When the 6 team NHA had reconvened later that year, it had now become the 4 team NHL. 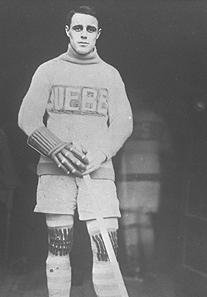 It was a shaky proposition for the new league to have sacrificed two Toronto franchises (Blueshirts, 228th Battalion) for one (Toronto Arenas) during troubled times, and when Malone's Bulldogs pulled themselves temporarily from the newly formed league, the most dire predictions for pro hockey stated the game would not last.

While players from the two failed Toronto franchises were culled into a new team for the city, a dispersal draft of Bulldogs' players was set to strengthen the ranks of the Wanderers, Canadiens and Senators, with the provision that all assets were to be returned to Quebec once it rejoined the circuit.

The strengthening of the remaining three clubs via the Bulldogs dispersal draft should have made the NHL a highly competitive league. Early signs were that the Toronto franchise would have an edge. 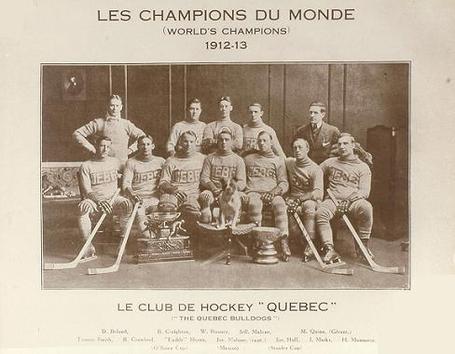 The Wanderers with a 5-15 record in 1917, were awarded the first pick, and bypassed 41 goal scorer Malone to select Dave Ritchie, who had scored 17 goals in 19 games with Quebec. The Habs happily snapped up the Bulldogs sniper with the next pick.

The Wanderers miscue was a catastrophic miscalculation.

Perhaps inhibiting the Wanderers' choice, was the fact that Malone was about to become gainfully employed with the Quebec City government at the time, in a public servant job post that would pay him a salary that far exceeded his hockey earnings.

The only trouble was, the Wanderers were off by one mere season, a fact of which the circumstances had yet to play out. Malone's government post would only begin in 1918.

A second miscue by the Wanderers did not help matters when they chose forward Jack McDonald over rugged defenseman Joe Hall. The Habs grabbed the player dubbed "Bad Joe" much to the Wanderers detriment and misfortune. 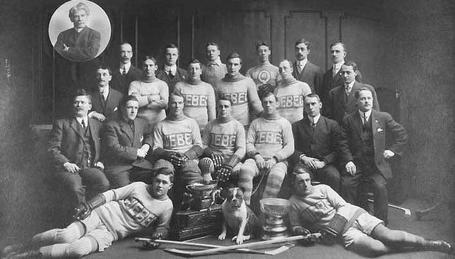 Hindsight has many tentacles, but the Wanderers leadership, from coach and manager Art Ross to owner Sam Lichtenstein, may have been trying to keep costs under control by not bringing Malone into their fold. As the NHL's first season dawned in 1917, the Wanderers and Senators had been hockey's most prized franchises, as both had several Stanley Cup to their claim.

The Canadiens at that time, had won their lone Stanley Cup in 1916, and were about to overtake the Wanderers as Montreal's more popular hockey club. A crossroads, unbeknownst to either side, was on the horizon. With Malone, added to a lineup that included Newsy Lalonde, Didier Pitre, Jack Laviolette and Georges Vezina, the Canadiens were simply better prepared for the cards fate would soon deal. Having acquired Malone may just have helped seal their fate.

Lichtenstein, a multi-pronged businessman, had not been doing well during war constraints, and it has been told that the Wanderers franchise was $30,000 in debt by 1917. On January 2, 1918, a fire ravaged through the Westmount Arena, home to both the Wanderers and Canadiens, reducing it to cinders. The cause is reputed to have been a cigarette that had not been butted out, but Litchenstein was investigated for arson, as it was his third business in eighteen months to go up in flames. 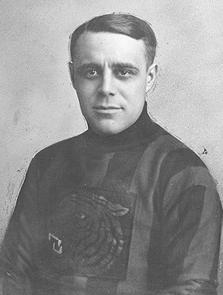 The Wanderers record at the time was a dismal 1-5 after six games. The Canadiens, for their part, were a solid 3-1, outscoring the opposition by a 27-8 margin in their three wins. Evidently, Malone played a huge role in the Canadiens' superiority.

Both Montreal hockey clubs had lost all their equipment in the fire, but the Canadiens, in better shape on and off the ice, lived on due to two main factors.

Winning record withstanding, fans were showing up at the Westmount Arena gate for the Habs' exciting hockey brand, whereas Wanderers attendance had been down due to their poor showing. Additionally, former Canadiens' goaltender and future team owner Jos Cattarinich, offered to use his downtown store as an outlet for ticket sales, as the Canadiens returned to play games in the smaller Jubilee Arena that housed the club during its initial 1910 campaign. It didn't hurt that Malone was filling the net at a record setting pace. 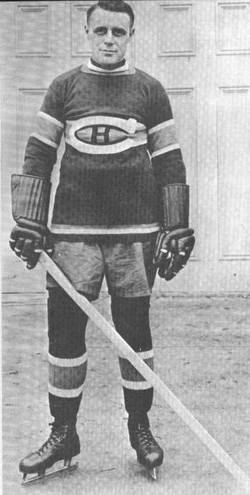 After winning their first Stanley Cup in 1916, the Canadiens travelled west, only to lose the 1917 championship to the Seattle Metropolitans. Adding the game's best goal scorer in Malone for the 1917-18 season, was thought to have put them over the top.

Four games into the 1917-18 campaign, the Canadiens looked to be winning far more than their inner city rival the Wanderers. Malone, a center during his Quebec years, had been switched to left wing on a line centered by Lalonde with Pitre on the right. In hindsight, the trio was likely the NHL's most devastating line ever, and even thought pivot Lalonde missed six games due to an injury, Malone could not be slowed. 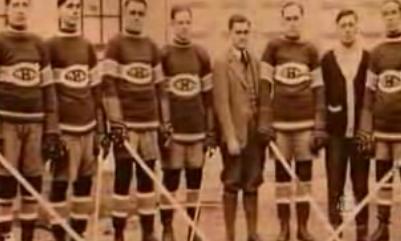 On December 22, 1917, the Canadiens defeated the Wanderers 11-2, with Malone and Lalonde each netting 3 goals and Pitre adding 2 of his own.

On December 26, 1917, the Toronto Arenas beat the Canadiens 7-5, in the loss, Lalonde scored once, and assisted on Malone's lone tally.

On December 29, 1917, the Canadiens returned home to face the Arenas, and trumped them by a 9-2 score, with Lalonde counting for 4 netters, Malone 2, and Pitre adding one.

In all, the trio had scored 24 of the Canadiens 32 goals, thus far, the line having maintained a six goals per game pace. It was an unheard of proficiency in hockey, and it assured that fans, despite the wartime constraints, filled the stands for Canadiens' games. 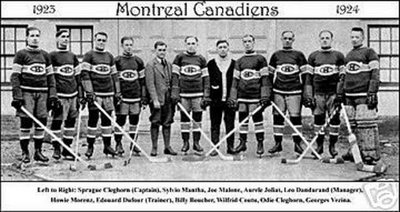 At the time, it also assured that fans would follow the Canadiens back to the smaller Jubilee Arena and continue to support the team.

It all begs the question: Had the Canadiens not added Malone to bolster their 1917-18 lineup, would the fans interest have been maintained? 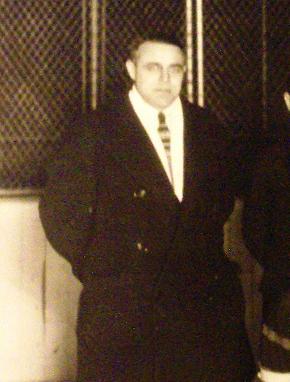 Malone at the Montreal Forum in 1945, to congratulate Maurice Richard on breaking his record.

Unfortunately, the Habs would not reach the Cup finals in 1918. The inaugural NHL season was split into 14 and 8 game halves with half each winner meeting to determine a league champions in a two game total goal series. The Canadiens, with a 10-4 record, dipped to 3-5 in the second half and met Toronto Arenas, losing the two game total 10-7. The Arenas, in their first season of existence, would wind up winning the city's second Stanley Cup in a challenge against the Vancouver Millionaires.

Joe Pelletier's great article at Greatest Hockey Legends, featuring an interview with Malone back in the 1960's.