Share All sharing options for: Building A Case For Rogie Vachon's Inclusion In The Hockey Hall Of Fame 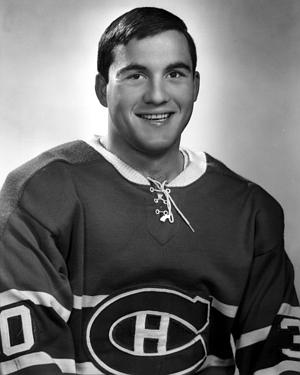 Robert L note: This Vachon plea will be run at random on my pages until it achieves its goal. It is up today, as the Gazette's Dave Stubbs, the biggest booster behind Rogie's inclusion into the HHOF met with him this past weekend, and has posted an article on the goaltender who is the idol of countless puckstoppers, past and present.

I'll be right up front - I think it is hockey blasphemy that Rogie Vachon, with 355 career wins to his credit, is not in the Hockey Hall Of Fame.

A quick surface checkmark of Rogie's achievements shows he has all the prerequisit crendentials: Stanley Cup championships, Vezina Trophy winner, All Star Games, All Star Teams, jersey number retirement, and MVP in the 1976 Canada Cup, on top of retiring in 1982 as the game's fifth winningest goalie.

So what is the argument for his exclusion? The most mundane response has been that while Vachon was a top goalie during his time, he was not consistantly dominant.

If that is why he is not in the Hall, it is an awful frail excuse after 355 wins.

How many players are consistantly "dominant"?

Since when has excelling over the course of a long career not been good enough?

The truth behind Vachon's exclusion may tie into the fact that only a certain amount of players gain entry each year, and if a player isn't a slam dunk to get it on the first few ballot years of eligibility, then their case continuously gets pushed aside in favor of the more popular and possibly more recent choices. As time goes by, and more players become eligible, greats the likes of Vachon, Dino Ciccarelli, and Glenn Anderson are neglected.

This past year the Hall inducted a bumber crop that included Mark Messier, Al McInnis, Ron Francis, and Scott Stevens - monoliths and icons each. There was hardly room for Rogie this time around with Brett Hull Steve Yzerman, Luc Robitaille and Brian Leetch making it in.

Every few years, the Hall committee who votes these players in gains a rearview conscience and tables a former star for consideration. In 2005, Dick Duff slipped through this crack despite cackles of discontent from those who claim more worthy nominees were again passed over. For all I've learned about Duff, he was a gamer, but it really should have been Vachon's time to get the call.