Share All sharing options for: Habs' Rout Of Listless Isles Cause For Cautious Optimism At Best As Goalie Debate Ignites 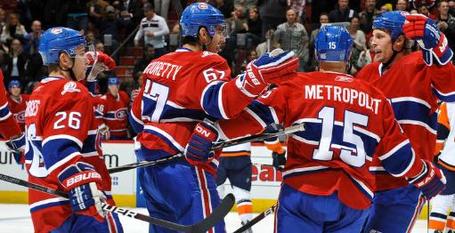 It did a Habs' fan's soul some good to witness the dominant display of firepower unleashed against a hapless Islanders squad on Thursday night, but a second consecutive win, especially against a pooped opponent, is hardly cause for unchecked enthusiasm.

The long and short of it is, the Long Islanders crew have been shipwrecked on hockey's version of Gilligan's Island for years and despite the recent turns, they're still no match for a retooled Canadiens squad 24 hours after an overtime win.

The good bit is that the Habs' players sensed an opportunity and went in for the easy kill, and continuing some strong habits from the past few games, used the boatmen as a timely tune up for the much more challenging Rangers tonight.

The importance of the win against the Isles will best be known by the end of three periods against the Blueshirts.

While playing down the Isles routing, there were several positive points of note.

Marc-Andre Bergeron is fitting in nicely, and the Habs PP has more bite with him on it. Bergeron's offensive instincts are well known, and his contribution will trigger more cohesiveness from the Habs PP unit.

It's doubtful that Bergeron is any kind of a longer term solution, but going forward, he is an interesting seventh D / twelveth forward option upon Markov's return.

The more I see of Glen Metropolit, the more I appreciate him. Who knew after all his time as a seeming fringe player in the league that he had such untapped potential. Now Metro will never lead a team in scoring, but it's not unthinkable that he can produce 35 to 40 points playing from the 3rd and 4th lines, and that would be huge.

Credit coach Martin's keen eye for seeing the steady veteran leadership and savvy skills that are Metropolit's toolbox. It will be interesting to watch how his season develops. How many so called fourth liners are there who can contribute both PK and PP minutes, win important faceoffs, and play wing as needed to help their team.

My guess is that a strong season from Metropolit will make him an ideal Masterton Trophy candidate. 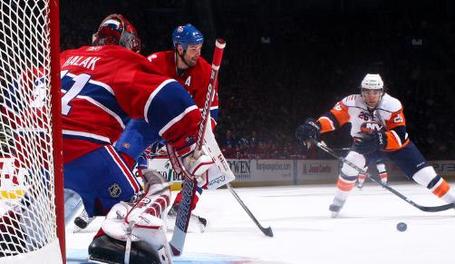 Of course, the inevitable storyline emerging from the Isalnders duffing concerns the status of the cluns goaltenders. A second strong showing from Jaroslav Halak is all it takes to ignite the story for the umpteenth time.

For myself, this tired playout is all just media fodder until Halak proves he can be solid over the course of successive starts.

I've said it before, Halak tends to stutter at the third or fourth start of a run. While that is a sticking point, he is not unlike many top goalies in that respect. He certainly isn't unlike Carey Price in that regard either. Halak also is helped by getting games in against mostly second tier teams, something I believe is how it should go as long as he is identified as the Canadiens' second goalie.

It is often brought up that Jaro is excellent trade bait, and needs to be shown often enough to maintain that value. I've no qualms there. While he offers a certain challenge to Price's status in the number one role, the role in which a backup is best suited to buffer the starter, is not one Jaro fits snuggly into.

Saying all this again will likely have me branded a Halak - basher, but I like a goalie that can come in and get those precious W's when needed.

My problem is that I think Price is best be served by a veteran netminded who's assured of his role and can serve as somewhat of a mentor to a young rising goalie. Price has never had that in Montreal, and it often shows. A capable older goalie would be a fountain of experience and calming presence for a designated franchise goalie, and that is something, no matter how good Halak performs, is not being provided to Price.

Now if one doesn't see Price as the de factp franchise goalie, then all other opinions come into play. Honestly, I'm fine with such a point of view, as no one can say without a snicker that Price doesn't have his own warts.

The bottom line is that this season will be a determining one in Price's case, and one has to wonder what goes through his mind, seeing Halak enjoy success, even against midling teams.

Should Halak get the start against the Rangers, how can that not play into Price's confidence?