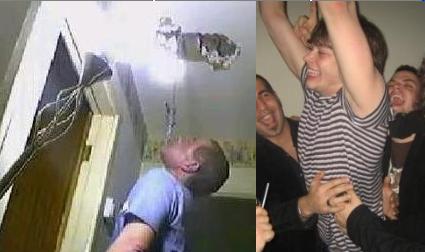 Confirmed by just about every source imaginable except the Canadiens so far, Sergei Kostitsyn has apparently left the team and has been suspended a second time.

Should more news come down, I'll do my best to post it here.

If so, he has essentially hung out his NHL career to dry.

There will be much ensuing talk about how GM Gainey has managed this case, and undoubtably many will say that Sergei should have been a part of the Canadiens lineup from Day 1.

Of course, personal issues and conversations remain unknown. Still, was there a better potential top 6 forward to fit alongside brother Andrei and Tomas Plekanec?

Until it is proven otherwise, the answer to that would be, "No, there is not."

Bottom line for now, is this a real noggin scratcher. Couldn't the communication lines have been a whole lot clearer.

A shameful waste, this all is.

Apparently, this is now an all blown saga, as CJAD is reporting that Sergei is expected to be on the flight to Texas for the Bulldogs game tomorrow night.

CJAD SPORTS HAS LEARNED SERGEI KOSTITSYN HAS HAD ANOTHER CHANGE OF HEART
AND AFTER GOING AWOL AGAIN, SUSPENDED AGAIN BY THE HABS,
WILL TRAVEL WITH BULLDOGS TO TEXAS THURSDAY MORNING
AGENT IS UNAVAILABLE FOR COMMENT

SERGEI REFUSED HIS ORIGINAL DEMOTION TO HAMILTON AT THE CLOSE OF TRAINING CAMP, AND MAY HAVE HAD A DEADLINE IN HIS HEAD FOR RETURNING TO THE NHL.  HE'D ASKED FOR A TRADE, BUT GM BOB GAINEY IS NOT GOING TO BE ACCOMODATING.

NOW SOURCES CLOSE TO THE TEAM SUGGEST SERGEI HAS ENDED HIS 'WILDCAT STRIKE' AND WILL BE ON THE BULLDOGS' FLIGHT TOMORROW MORNING TO FACE THEIR AHL RIVALS IN SAN ANTONIO.