Habs Win, And The World Returns To Normal

Share All sharing options for: Habs Win, And The World Returns To Normal 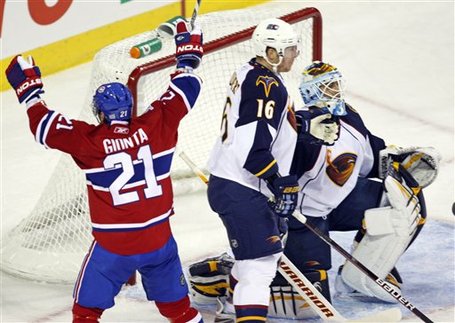 Well, not quite. I mean hardly, really!

Had all kinds trouble headlining this post. "Habs End Skid In Shoot Out" was just too boring and the win was, honestly, all too similar to some of the last five losses in the string.

As the script remained almost the same, the post could have been titled any of "Habs Top Line Saves Day, As Habs Edge Thrashers", or "Snakebitten Habs Spit Poison In Narrow Win" or "Martin's System Begins Paying Dividends". Emerging storylines such as Marc - Andre Bergeron's debut or Jaroslav Halak second start just did not factor as being headline worthy.

Perhaps a compelling title would involve the Habs PP, would looks like an out of kilter ambush most nights!

So, in the world of Habs' fans, much has returned to normal now that the win column read "3" after two weeks of trying. The city of Montreal should be in a much better mood although the die hards will still require great doses of optimism and humour to see past the team's current standing.

As I saw it, the win over Atlanta was nearly a carbon copy of the Ottawa loss this past Saturday. Missing was a hero - playing Kovy, as Ilya Kovalchuk continued to have trouble scoring against the Canadiens. The Habs again played with fire nearing the final frame, in a game where they dominated shot - wise for the better part.

While Halak rarely needed to make game savers up until Colby Armstrong took advantage of a bumble by Marc - Andre Bergeron to knot the game, he was solid for most of the game, despite losing track of the puck and glancing behind himself a time or two.

Bergeron had a memorable first game as a Hab and contributed much in the way of smoother breakouts, added blueline poise and nifty passing on the PP. Unfortunately, it will be recalled more for the way in which Armstrong became his nemesis on the night. After getting smacked behind the net from behind by Armstrong and leaving the game somewhat dizzy, he returned in the third, dropping his stick on the play that lead to the Thrashers lone goal.

That was the funniest play, in a sad way, that I've seen since O'Byrne put the purse in his own net. Poor guy!

Later in the third, the Thrashers pest was involved in a scoring chance in the Canadiens crease, resulting in an unpenalized mouthful of blood looked that somehow looked good on Armstrong. One of karma's beauties. 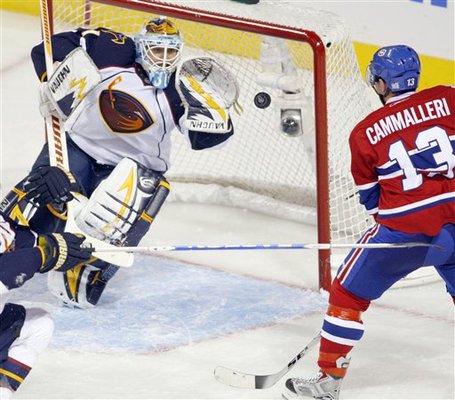 But overall, who's kidding who? While several Habs, including Plekanec, are performing well on a nightly basis, the Canadiens fortunes rest on the outcome of the Gomez, Gionta and Cammalleri show.

As this line goes - there's spits, sputters, sparks and fireworks - so do the Canadiens. The trio accounted for the majority of the Habs firepower last night, with both Gionta and Cammalleri firing 7 shots on goal. Add in Gomez's lone net hitter, and the 15 shots fired by the line are almost half of the 35 shot team total.

Checking out shot breakdown below, the trio had 5 even strength shots, 8 on the PP, and two, both by Gionta while shorthanded. The line had another 9 shots blocked and fired wide 5 times. 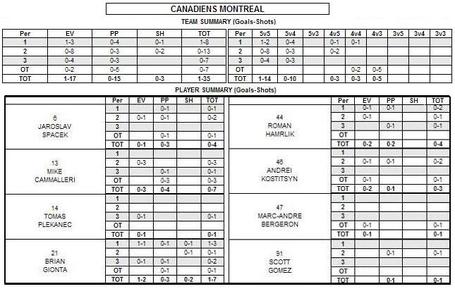 While those stats tend to testify to the dizzying, fire from all angles pace the line works at, shot target practice might be in order. Still, they seem to be often rushing things, or hesitating a bit much. Of all those chances, EV, 5 on 5 and PP, there weren't an abundance of one-timers, which is telling.

You could plainly see on the 5 on 3 occasion, that the oppositions defending triangle is way too large. The points players' feeds become almost non - existant because they are practically backed up to the blueline. Even Markov's skills couldn't help when the defender's coverage is so stellar. There needs to be more cross ice movement and traffic in front of the net in all occasions to get more clear opportunities. Without players such as Kovalev and Markov to polarize, the PP has no identified focal point, and that is what is making it easy to shut down. As it stands, teams are content to let the Habs PP fire away with the middle of the ice blocked up like a construction zone.

The success of the PP is key to Habs unlocking these close games. Once it gets in gear, team will start backing off on rubbing the Canadiens forwards out as much, and space and time will create itself.

Continued good news was that the team is starting to show some signs of playing Martin hockey. Against Ottawa on Saturday, the few chances the Senators earned resulted in goals. There weren't many. There were even less last night, as the Canadiens outshot their foes again for the fourth straight game.

It has been a painful and somewhat slow turning to watch as this newly formed team evolves into a unit that deploys with all parts interconnected and operating in unison like the fingers of a hand. 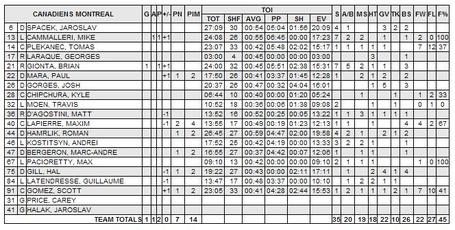 I'm beginning to see that some of the challenges presently facing the club are similar to what the Penguins endured without Sergei Gonchar last season. If this group can remain in contention, playing .500 to say the least, it will receive a major boost on Markov's return.

Only then, will this club take on the look and feel of what it was designed to be.

More links on this game...