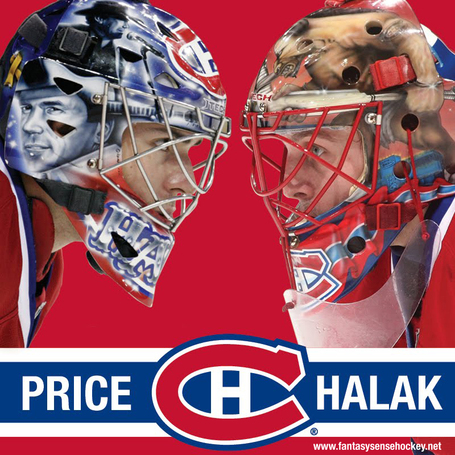 A goaltending controversy in Montreal?

Surely you jest! Montreal is a city that booed Ken Dryden, a goaltender who produced a career record of 258-57-74 and won SIX Stanley Cups in only eight seasons. Montreal booed Patrick Roy out of town in 1995, just 30 months removed from the 1993 Stanley Cup and the recipient of two Conn Smythe trophies and three Vezina's during his 9 seasons. Is it a surprise that the fan base has decided to forget everything that Carey Price has accomplished by the age of 22?

Canadiens fans are loyal and passionate, but remarkably consistent in their idiocy. From booing Ken Dryden during the 1979 Stanley Cup Finals because they thought Bunny Laraque was a better goaltender, to the infamous poll before Game 3 of the 1993 Adams Division Semi-Final, where a large majority decided that Andre "Red Light" Racicot should start the pivotal game.

The idiocy returned in 2008 after Price registered one of the best years by a 19-20 year old goaltender in the history of hockey. During an 18-month span, Carey Price won a World Junior title and MVP, the CHL goaltender of the year, the Calder Cup, the Calder Cup MVP, won a starting job in the NHL, went 18-8-2 with a 2.46 GAA and a .923 SV% to push the Canadiens to 1st in the Eastern Conference and became only the 4th twenty year old goalie in post expansion history to win a playoff series (registering two shutouts, including one in Game 7). After ALL OF THAT, Canadiens fans were screaming for Jaroslav Halak to start Game 4 of the Philadelphia series.

Does that sound familiar? What are the expectations for a Canadiens goaltender? If Roy and Dryden failed to meet the expectations, how will Price ever meet them? And if Price does not, and Halak is thrust into the spotlight, how long before the fanbase begins to question management for choosing him? Don't kid yourself, if 6 Stanley Cups in 8 seasons is not enough to gain immunity from the bloodthirsty tribe, nothing is.

So how do they really stack up?

Is this another case of simplifying blame and the "what have you done for me lately" attitude that has existed in Montreal forever? Or has Halak been significantly better than Carey Price during their brief careers?

Anybody who follows my site fantasysensehockey.net knows that I feel that the only proper comparable for goaltenders exists in shared situations, so I did not compare junior statistics. The variables are not the same and can easily twist perception (see Chris Osgood's career). I stuck to their NHL experiences for the statistical comparisons.

Which camp is right? Team Halak or Team Price? Let's look at the tale of the tape.

Their career statistics are strikingly similar. Price carries the edge in winning percentage and goals against average, while Halak has the superior save percentage and has an equal amount of shutouts in 35 fewer games. Neither goalie has outdistanced each other significantly in any of the categories.

Forgotten in Price's spectacular fall from grace is how statistically dominant he was to begin the 2009 season. At this time last season there was little debate who the starter was, and through the first 42 games there remained no question. Price was among the league leaders and registered at least a point in 21 of his 25 starts. A high-ankle sprain on Dec. 30th took him out of the lineup until the All-Star break. Halak was inconsistent as the Habs struggled to a .500 record in spite of his strong individual statistics.

The second half of the season started with an opportunity for Halak to show the Canadiens he was not only NHL ready (at the time, there still remained doubts), but that he could be a starter. Halak was shaky throughout January but the Canadiens continued to win as he posted a 6-3-0 record with a 3.52 GAA and a .888 SV%. Price forced himself back after 3 weeks and while it resulted in disaster for him, Halak thrived and finished out the season 7-6-0, with a shutout, a 2.81 GAA and a .928 SV%.

2009 was a tale of two seasons. During the first half, Price was dominant and statistically was not out of place in his first All-Star game, but an ankle sprain stopped Price's ascension and his 2009 season never recaptured it's early momentum. Halak on the other hand started slowly, but was far superior in the second half. With memories in Montreal remaining short, the assumption is that Halak was far superior in 2009, but their numbers are close to a wash again. Outside of Halak's superior SV%, they both registered mediocre campaigns.

How did they both perform against playoff level teams? Price had a winning record while Halak finished up 2 games under .500. What was the level of the playoff teams they faced. There is a distinct difference between a game against St. Louis Blues and a game against the Detroit Red Wings.

Price faced the Stanley Cup finalists 5 times and the other two teams from the final four (Canes/Hawks) 4 times. Price's record in those 9 games was 5-3-1. Price struggled with the Eastern Conference champion Boston Bruins going 1-2-2 and his loss to the Ducks was one in which he relieved Halak from a 4-3 defecit and even though the Canadiens never tied the game, was still saddled with the loss. Halak's record against the final eight from the playoffs plus the Sharks (his best game of the season) was 5-6-0. If he had been saddled with the Ducks loss, it would have dropped to 5-7-0. Price had superior statistics and a tougher schedule.

The non-playoff schedule is where you make your Vezina run. If you want to put up huge numbers, this is where you must dominate. Halak did this, Price did not. The difference between Price's winning percentage between the elite teams and the cellar dwellars was .092, but his SV% plummeted. One wonders if this inconsistency was due to lack of preparation. Halak on the other hand enjoyed a spike of almost .25 on his winning percentage when facing teams that failed to qualify for the playoffs.

With their statistics a virtual saw off, what are the intangibles that have led to Price being favoured?

Age is a definite factor as Price is 27 months younger than Halak. At Price's current age Halak had played 16 NHL games (77 less than Price). Two years of maturity may not seem like much, but it is a huge factor in a goaltender's development. At the age that Halak started his first NHL game Price had started 89 NHL games, winning 49 of them. Price is one of 4 goaltenders in post-expansion history to win a playoff series at the age of 20 (Andy Moog, Patrick Roy and Sean Burke).

Look at the number of career NHL wins by his peers at his current age. 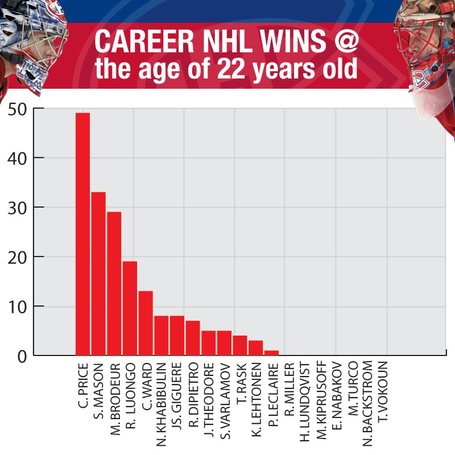 * Steve Mason can easily surpass this total with 17 wins this season.

Only four of his peers had more than 10 wins at his age, and names like Ryan Miller, Henrik Lundqvist, Miikka Kiprusoff and Marty Turco hadn't even played an NHL game. The best goaltender's in the league today were not polished at the age of 22.

This is all about expectations and a sense of entitlement. The media sold Price as the next coming of Roy and provided the imagery of Ken Dryden robbing Jim Pappin, Steve Penny stoning Peter Stastny and Patrick Roy dominating the Rangers in OT in 1986. Add in a wink at Tomas Sandstrom and the fanbase was off and running with their ridiculous expectations. The amazing thing is, with expectations through the roof, Price actually met them for 30-40 games, but the second that Price failed to meet the standard of arguably the greatest goaltender of all-time, the fanbase tossed him under the bus like they had the original. The eerie imagery of the playoffs was a stark reminder of what mindless booing can accomplish.

The ridiculous thing about the whole thing was Roy (the deity who was booed out of town) was not above these struggles. It took him until the age of 23 to establish himself as a legit All-Star. From 1987-88 his situation played out just like Price/Halak. He was inconsistent and although he won back-to-back Jennings trophies, he struggled to outplay journeyman Brian Hayward.

I am positive if message boards existed in 1987 that there would be arguments about how Roy was a one-season wonder and that Hayward was the superior goaltender. Roy was inconsistent, he let in bad goals and he cost them a series against the Flyers with his erratic play. Why is Jean Perron going with Roy? Look at their statistics, Hayward has been better, he should get his opportunity! (As members of Habsworld.net and the habsinsideout.com communities nod their heads).

Am I comparing Patrick Roy to Carey Price?

In potential? No. In inconsistency? Yes. Roy admitted in his book that he suffered from immaturity and did not know how to properly deal with his struggles. The only thing that saved him from being run out of town was the fact that he DID win the Cup in his rookie campaign. That and three Vezina trophies bought him six seasons of immunity from the lynch mob.

The misconception among Canadiens fans is that Halak has played better than Price, the statistics say otherwise. Judging Halak's last 10 starts against Price's is like claiming that Ray Whitney is the equal to Evgeni Malkin because they both had 33 pts in their last 25 games. All 82 games count, and whoever was hot last April is inconsequential today (Fernando Pisani anyone?).

Halak has earned a Hayward level split, no more, no less. After watching the way Gainey dealt with Sergei Kostitsyn they will be best served to test Price's character. If Price gets mad, who cares. He needs to take out his frustration in the weight room or put in extra time on the ice.

This is not about the next 10 games, this is about developing a franchise player. Halak has to do more than equal Price's performance to get a fair opportunity because he entered the competition three laps behind. Holding his own still leaves him three laps behind. Is it fair? I don't care! You don't ignore 36 great months because of 3 poor ones. Halak needs to significantly outplay him for more than 15 games before you retard the growth of a player with Price's pedigree.

If you think you are re-inventing the wheel by targeting Carey Price with your frustrations, think again. Did the problems of December 2, 1995 go away after booing Roy? Did booing Dryden in 1979 lead to the glorious "Bunny" Laraque era? Did starting Patrick Roy in Game 3 versus Quebec result in the Nordiques four-game sweep?

The only goalie that will never get booed in Montreal is the one who wins the Stanley Cup every season and registers a 0.00 GAA and a 1.000 SV%.

So who is the winner of this titanic debate? Team Halak? Team Price?

The Winner is.......... The media, the messageboards and the blogosphere.

This is not about Price and Halak. It isn't about right or wrong. It isn't even about who is better. The names have changed, but the debate has remained the same. This is and has always been about the millions of passionate, knowledgeable, YET gloriously irrational fans that follows this franchise.

God Bless us all!

Chris Boyle is a frequent contributor to Habs Eyes On The Prize and goes by the handle Wamsley.
He is a lifelong Habs fan and the editor of fantasysensehockey.net