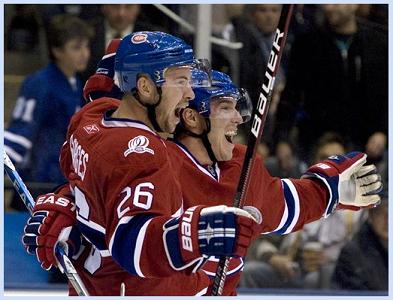 The Canadiens surely knew what they were in store for with an opening night date against the Leafs. As much as the Habs have been given a makeover, the always gnarly Leafs have been given an identity makeover as well. Toronto GM Brian Burke has promised a team that is tougher to play against, and by all acounts has delivered on his word.

Now that he has made them tougher, he just has to make them smarter.

For all intents, the Leafs delivered a many a message in this opener, but shot themselves in the foot a time too often, and their errors proved costly against an opportunistic Habs team.

The Canadiens for their part, appeared no more out of sync than they had in exhibition games, and they were essentially outplayed for the better part of the game by a hungrier group of Maple Leafs.

The Habs owe this win to Carey Price, truly the game's first star. Had it not been for his stellar showing, the team would be licking a few extra wounds at they are presently. They also owe the win to former Hab Mike Komisarek's rambunctious indiscipline. Komisarek was in the sin bin for two of the Canadiens goals and served a total of 15 minutes in penalties, almost the equal of his night's icetime.

Interesting stats for the game include 50 minutes in penalties handed out, 27 of which went to Toronto. The Leafs outshot Montreal 41 to 27, but the Canadiens somehow managed to outhit their rivals 37-22.

It was a rowdy and spirited game from the get-go, with Georges Laraque and Colton Orr dropping the gloves just 1:51 into the game. Travis Moen and Jay Rosehill duplicated the senseless bout halfway through the first period. 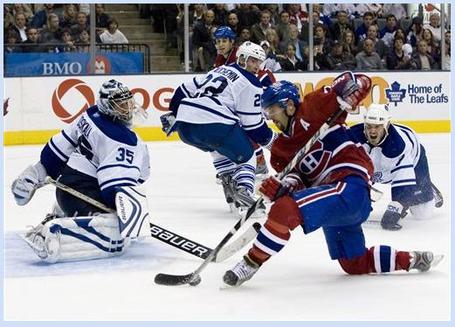 The game marked the debut of several new additions to both clubs, highlighted by Komisarek's first game against his former mates.

Like, was he trying to make an impression, or what? Komisarek played like he had a thing or two to prove, more than likely to Leafs fans and brass. Mark my word, he'll be named captain of the Leafs in a matter of weeks.

Habs fans are familiar with Komisarek's act, and in his first game in a Toronto uni he displayed both the reasons why he could be missed and why he is replaceable in the first place.

Leafs fans will love Komisarek for all he does, but what often gets him in trouble is that he tries to accomplish too much within one game. A shot blocker and slammer par excellence, he busies himself with added jabs, slashes and second looks while in the corners and often is caught out of position due to the added tasks. Not being terribly mobile for starters gets him in trouble and the multitasking wears on him over the course of a season. Making himself a marked man by officials and opposing players by not playing within his means will wear him down after 40 or 50 games. If he starts dragging some injuries along, he will replay the uselessness he brought to Montreal last season. Then again, Komisarek was never all that intelligent about picking his spots.

As mentioned, Carey Price was on top of his game from the puck drop in this one, and it will go along way to ease the worries of the club after he had such a brutal finish last season. What was impressive about Price as he was bombarded from all angles was the composure that returned to his game. The uneccessary flopping and throwing of his body for lost pucks has disappeared, and his focus through the crowds in front of him was reassuring. Several times, his legs kicked out ahead of shots and his glove was better than it has been in a while. He was definitely zoned in for this one.

Four unsung Habs contributed to this win, namely Josh Gorges and Glen Metropolit with a goal and assist each. Both serviceable vets showed the type of leadership from all participants that this Habs crew will need in winning games such as this one, in which they were for the most part outhustled all game long.

A goal from Travis Moen, and an assist from Georges Laraque will not often be scoresheet partners, but when the third and fourth line members contribute to the scoring, a win often follows.

A creative coaching nod to Jacques Martin. I was in the midst of blurting out a sentence that started with "What the heck is Metropolit doing on the power....." I never made it to the question mark. Metropolit, who had set up Moen earlier with a nifty behind the net feed, tied the game while Komisarek was serving his fifth minor of the game. 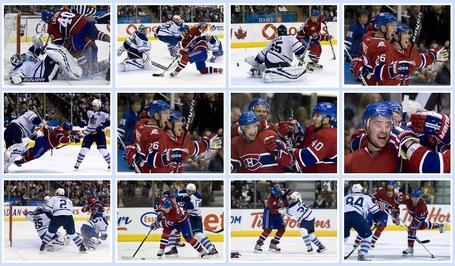 Of the new crew, Mike Cammalleri displayed some wings in this contest, especially on the overtime winner. For the Habs, Cammalleri will be alot like a Brett Hull type of player, where you will see him in quick flashes. He seems to become especially dangerous when given openings to work with.

Brian Gionta was equal to himself, scoring the first goal of the season halfway through the first. Put Gionta down for at least 30 goals this season.

Scott Gomez, unfortunately caught my eye mostly when Komisarek (twice) was catching his with his stick. Gomez, as did Mssr's Kostitsyn, Lapierre, Latendresse and D' Agostini, got better as the game wore on.

Hal Gill played soft behind the net on the Habs first goal, where he underestimated the speed of the player chasing him. It was the type of mistake that just may see him skip some games when Roman Hamrlik returns. Not a strong debut for Gill.

Tomas Plekanec had some good moments, finishing the night with two assists. Hesistancy and acclimation to new linemates are Plekanec's hurdles at present. All said, he put in an honest night's work, highlight by a team leading five shots on net. Need I mention he didn't play like a little girl.

(Side note: My little girl of 14 netted the tying goal in her first game an hour earlier. She also missed a wide open net, and redirected a point shot that hit both goal posts. I told her if it happens again her allowance stays in my pocket! She went 3-4-7 in three exhibition scrimmages, so she'd better shape up. Kidding aside, she's 4 goals away from career goal 100. I promised her an EOTP exclusive if she hits it by Thanksgiving!)

Overall, the timing of the Canadiens players is still somewhat off. That could be an understatement. The Habs aren't slow by any means, but in this one, there were times when they just plain reacted too late to the whirlwind around them. It looked like exactly what it was, which was several newcomers being introduced to the Habs / Leafs rivarly. Hopefully they will adjust the intensity next time around.

The silver lining in this game just might be the two powerplay goals scored by the Canadiens. There's nothing quite like an efficient powerplay to back other teams down, especially ones who endeavor with the extra liberties taken such as the Leafs. Should the Habs PP regain its deadliness from two years back, it will sure go a long way towards defining their game plan, easing more than a few concerns along the way.

With that slight silver lining comes the black cloud. Andrei Markov feel ackwardly in the crease midway through the third and did not return. What is it with this guy and freakish injuries against the Leafs?

Next up for Montreal is a trip to that exciting metropolis known as Buffalo on Saturday night. A second win would put some wind behind their sails and make the remainder of the five game road trip a much more enviable task.

More on the game

Habs Inside Out / Live Game Blog