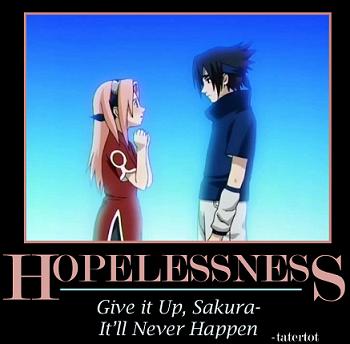 After reading the words of commenters this morning to my bleak summation of the Canadiens loss to the Senators last night, and checking out Boone's always dead on target "About Last Night..." at HIO, I received needed injections of hope to cure some of my hopelessness.

Most of it would fall under the heading of "Something's Gotta Give!"

In e-mail exchanges with Dave Stubbs yesterday, he brought up a curious point about those of us who write about the Habs, saying that he would not read something I have posted, due to touching on a similar topic, until after he has completed and posted his piece. I noted that I often feel exactly the same way, and that I lay off reading Boone post game, because not only does he apparently type faster than I can think, but we also often touch upon common thoughts.

Usually, it is just a thought or two, but in this line, originality counts for something and no one wants to appear even remotely influenced by another.

In the past, after noting more than once that Boone's words and mine rang a similar bell, I did read all of "About Last Night" mainly to steer clear of things he spoke of.

That said, I suppose hopeless breeds similar thoughts. Both Boone and I stated we'd keep it brief. I did - he did not. Both of us alluded to the greatest goaltenders ever almost having to be perfect to get this team a win. Boone mentioned "mantra's", and I resorted to old cliche of "When you're going through hell, keep going!"

I guess I do not even have to read Mike any longer to think along similar lines.

I came within a notion of posting a video clip to summarize a feeling I had about the Canadiens, but it was getting late, I was tired and bummed, and I had wanted to keep it brief to begin with. I killed the idea.

Strangely, perhaps inuitively, I radared in on Boone's choice of words. Quote:

"For me, that's the scary part about the way the Canadiens have begun their season: they are doing their best ... and their best might not be good enough."

What do you do?

As I said, keep going through hell. Eventually, you keep going, you emerge from it.

The quote is divorce based for me. I used it often when my brother went through that particular hell years ago. It seemed a better "pick me up" than sayings about silver linings, lemonade, etc.

The Habs' players are giving it their all. If you don't think that after a summer of new signings, all these players are dying to taste the thrill of victory inside their Bell Centre, then you don't know much about the pride of a professional hockey player.

Their best has not been good enough yet!

The clip here is from Springsteen's "Tom Joad" album, a most depresing but brilliant piece of work. Back in 1996, I was one of 2,000 or so lucky folk jammed into Theatre St. Denis for his acoustic show, and he prefaced "My Best Is Never Good Enough" by suggesting we cover the little one's ear, as it this song had some dirty words in it.

Whimsical as it is, this ain't no "Born To Run". The song's funny, but a downer, and far from his best work. At that show, he told the crowd he was influenced by an old B-Movie psycho thriller, in which the killer utters some dumb cliche before each trigger pull.

Fittingly, it was the evening's final song.

I hope it somehow brings a smile to ya until the next Habs win...

Every cloud has a silver lining, every dog has his day
She said, "Now don't say nothin'
if you don't have something nice to say."
The tough, now they get going, when the going gets tough
But for you my best was never good enough

"Now don't try for a home run, baby
If you can get the job done with a hit"
Remember, "A quitter never wins and a winner never quits"
"The sun don't shine on a sleepin' dog's ass"
And all the rest of that stuff
But for you my best was never good enough

"If God gives you nothin' but lemons, then you make some lemonade"
"The early bird catches the fuckin' worm,
Rome wasn't built in a day"

"Now life's like a box of chocolates,
You never know what you're going to get"
"Stupid is as stupid does and all the rest of that shit"

Come'on pretty baby, call my bluff
'Cause for you my best was never good enough