Lady Luck Dumps On Habs In Loss To Avs

Share All sharing options for: Lady Luck Dumps On Habs In Loss To Avs 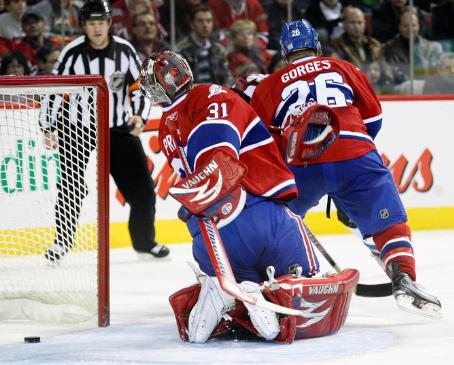 For the 2009-10 season home opener, the Canadiens and Avalanche put on an exciting display of what could best be called good old firewagon hockey.

During good long stretches of the game, one could envision a time warp matchup between the '77 Habs and the '96 Avs.

The only trouble was, the officiating was vintage 1918 debauchery, and we can all be thankful it didn't hamper the performances more than it already did.

I see it like this. It seems clear after a handful of games that NHL officiating heads have gone somewhat retro by allowing more infractions to go uncalled. It often looks as though time has been turned back ten years to pre-lockout lenience.

Now depending on what kind of hockey you like to see played, this may or may not add surplus excitement to your prefered brand of game. Whether you lean towards the freewheeling open play of recent seasons or the no holds barred rough stuff, the change in officiating policy accomplishes two things:

First, it increases the chances of parity, or as it is often termed, manufactured parity.

Secondly, it covers the refs asses in regards to what shitty work they were doing in the first place!

(Friday 1:00 p.m. - An update on this notion, the Canadiens had 7 skaters out for the final seconds of the game. Here's the juice and photo evidence courtesy og Puck Daddy.) 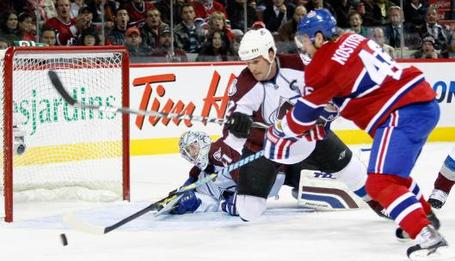 As mentioned, the game was a barn burner that went down to the last second. The 3-2 loss sums up in certain ways the Habs season so far, perhaps even the whole of the 2009 calender year.

Yup, there just ain't much centennial karma is there?

Like, I'm starting to get the feeling there's been a curse placed on the Habs somewhere in time, something like the hex a former Chicago coach placed on the Blackhawks back in the '30's. They've won one Cup since.

It took the Rangers 54 seasons to break theirs, after burning the Madison Square Garden mortage in the Cup bowl.

After the Red Wings conspired with Clarence Campbell in '55 to snuff out the Rocket, they went Cupless for 42 years.

Of course, the Leafs have dried up since '67, the cost of accumulated beligerence / ignorance and winning the mug in Canada's centennial year.

Are the Montreal Hockey Gods that pissed that the Forum was turned into a skanky movie mall and that Patrick Roy was traded away?

The Canadiens deserved to win this one, and not by a margin. Stellar performances by both 'tenders - Craig Anderson and Carey Price - kept the game tight. For a rare occasion, the Habs not only outshot their opponant, they also held their foes to under 20 shots.

Clearly, the club is progressing, it just isn't showing in the standings.

Lady Luck was all over this one, on both sides, as Avalanche goals banked off skates worn by Josh Gorges and Shawn Belle, and the Habs second tally - a Tomas Plekanec whizzer - resulted from a missed call by officials after the puck clearly glanced off the meshing above the glace.

It was quite funny to watch on the replay, as Anderson did his best Usain Bolt improv while an Avs defender struck a Jesus pose. A cross ice feed from Andrei Kostitsyn to Tomas Plekanec was a beaut.

Gotta love those late period goals. This one set up a dandy of a third period. 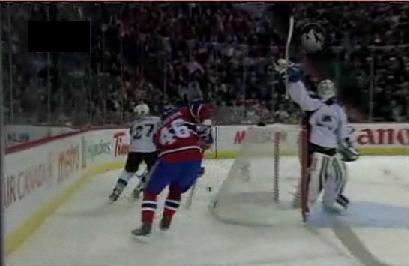 The Canadiens as a whole and down to almost all members put in solid nights. A late third period penalty to Hal Gill - a real bonehead holding call - was the one glaring exception.

This team overall is quick as a blink, but the cohesion of playing at such a speed takes time. There is still hesitancy in execution. Players unsure hold onto the puck a fraction too long. Options are often unseen. Shots on goal are either rushed or impatiently waited out.

There's tons of will and killer instinct, but it has yet to manifest itself into a full sixty minute effort. A slight second period letdown helped decide the game, but that is often what happens after freakish goals.

All told despite the loss - and I'm getting tired of saying it - the Habs seem to be coming round. There's just a corner around every corner.

Plekanec is for real again, in a 2007-08 kinda way. He was the best Hab last night. He's involved and committed, and doesn't seem to be labouring or thinking too much. There is instinct again, where there was reaction last season. Six games in, I've totally stopped worrying about his game.

Turtlekaneck's linemates put in their best game as well. Max Pacioretty didn't look out of place on the second line, and for the most part, Kostitsyn looked as though he had something to prove. Good signs.

Price couldn't be faulted on the redirect goals. Some pucks have eyes, simple ad that. A few more efforts like like last night, and his confidence will be restored.

Gomez missed a lesson. On the Habs second goal, the Avs players quit because of the aforementioned non - call. On Colorado's game winner, there was Gomez, away from the play after having taken an elbow to the noggin, barking at the ref. Keep playing 'til the whistle sounds, bro!

Do Mike Cammalleri and Brian Gionta have some Russ Courtnall in them? I recall vividly ol' Russ' wheels of fire, always ahead of the puck and the play, almost to fast for himself. Gionta and Cammalleri may not be hampered by slowing it down some when room is available. It's all about patience and turnovers.

A sound game, finally, from Jaroslav Spacecadet. The 35 year old has tools, but often has no WD40 in the toolbox. Common thought has it that the Habs signed up Marc-Andre Bergeron based on Andrei Markov's loss. Methinks it is because brass has realized that Spacek cannot command the powerplay as hoped.

Shawn Belle was having une belle soiree until the puck glanced off him for the Avs second tally. I think there is promise in this kid. I remember him from the WJC a few years back. He's good and still young.

Maxim Lapierre and Guillaume Latendresse put in some more solid shifts. Getting them back to back is a concern. I'm starting to wonder what separating them would bring.

Is there a more dogged checker than Travis Moen. It's impossible not to like him.

Matt D' Agostini couldn't check his luggage. He should be sent somewhere with it before prospective buyers all find out.

I should say something about Paul Mara. Maybe he's that kind of player, that when he's barely noticed, has had a great night.

Alright, that's plenty enough optimism after a loss. Sometime soon I get the impression I will be truly red-assed after a win, just for balance sake. 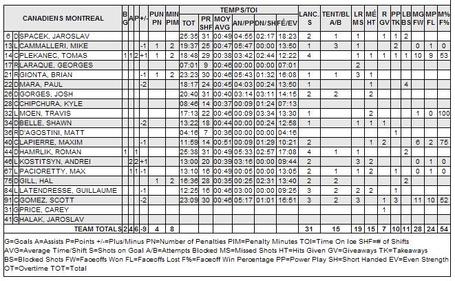 Je suis...decourager: Avs bounce past Habs in home opener - Ya! The Habs Rule!