Share All sharing options for: Sideshow Georges Laraques Must Now Punch The Bleeding Lights Out Of Darcy Tucker To Restore His Image 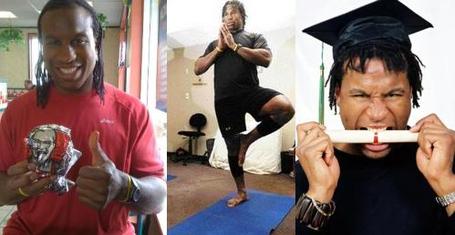 More and more it seems Georges Laraque's signing with the Canadiens last summer was just a big stepping stone to further his post hockey career as a philanthropist.

For a guy who's scored all of 0000000 goals in two seasons with the Canadiens, he sure gets miles of slack in the hockey media.

Yes, Georges is a hell of nice guy, but he's handsomely paid to be the Habs enforcer, a role he's rarely fullfilled.

He also seems to be a heck of a nice guy, involving himself in a variety of solid charity causes.

Everyone loves this in a person, until they climb on soapboxes to announce it!

Georges has been all over the place recently, and the always entertaining and informative Four Habs Fans has it covered from soup to nuts. From his PETA involvement to his children's work, Laraque's rep as a tough guy with a heart of gold has been well polished. He's clearly no Michael Vick.

This week, came notice that Laraque is just a guy that cannot say "No".

The Octane 7.0 ad featuring scantilly clad women as street hockey players is harmless on the surface, and don't even start on all that "objectifying women" crap. Where Laraque crossed the line is that the performance enhancing concoction is an alcohol based product that contravenes NHL rules in regards to promoting such things. The steroid in a bottle is a big no-no for an athlete to get behind.

Laraque should know a thing or two about taking short cuts.

Georges has been busy apologizing for the ad, pledging to dogs in the street that a lesson has been learned.

Now all this sideshow business would be tolerable in a hockey fan's sense if only Laraque were performing the job he's been paid to do.

Here's hoping he clues in soon, and begins endearing himself to Habs fans for a change. Darcy Tucker and the Avalanche are in town Thursday, representing a perfect opportunity for big Georges to put out some lights.

Either that or he finally scores - somewhere other than in road hockey.