Habs Perk Up A Bubbling Crude In Loss To Oilers

Share All sharing options for: Habs Perk Up A Bubbling Crude In Loss To Oilers 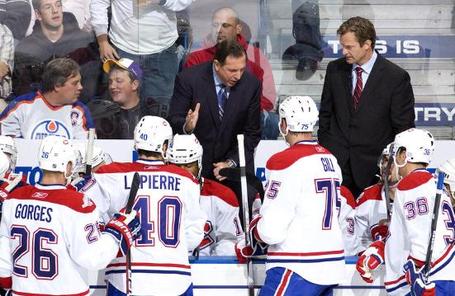 After being shellacked like a shithouse toilet seat in Vancouver last Wednesday, the Canadiens 3-2 loss in Edmonton represents a slightly more respectable showing for a group desperately in need of finding itself. There are still many wrinkles for Jacques Martin's iron to pass over, but which each passing game, the Canuck debacle notwithstanding, the coach is becoming better acquainted with the sure values on the club.

In terms of optimism, it would seem at a glance that there is not much to get lit up about after five games. The Canadiens two wins in Toronto and Bufalo were robberies of the hot goalie variety, of which they suffered last night at the hands of Nikolai Khabibulin. The play of a select group of players offers quantifiable hope that better days are to come.

Perhaps the best news is that a six game homestand awaits and that the annual western roadtrip - a perennial graveyard of losses for the Habs - is in the books for this season.

Despite the shyish 2-3 record, it is clear that the trio of Scott Gomez, Brian Gionta and Mike Cammalleri - as a line itself, or not - represent the bulk of where the Habs offense will come from. All three, especially Gionta, have shown that they can create and produce sparks. More time together will benefit them, as will the last line change on home ice. As Martin often united the three, almost desperately it seemed, in spite of opponents easily matching their firepower with their top lines, much of what they bring was neutered. These three will clearly have more offer with the line matches working in their favor.

Gionta, for one, has no quit in him. His goal against the Oilers late in the second period kept the Habs hopes alive where another rout might have seemed possible. 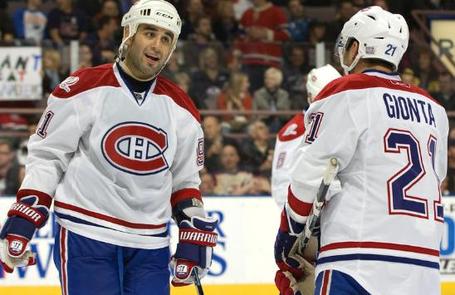 Carey Price, with two brilliant performances and a blowout behind him, was only so-so against Edmonton. He needs to be better in close games for the Canadiens to have a chance. Price's body language, during and after goals, tells a story every game and you can be sure coach Martin is taking note. There's an abundance of defeat in his bodily expression, where defiance is clearly needed.

You could see Price almost express disgust with defensemen Jaroslav Spacek on Mike Comrie's first period marker, after the D-man extended his blade to deflect a shot on a play he rushed to get back into. Spacek never touched the puck, but it was close enough to throw Price off. When a goalie's confidence is shaky, such plays annoy. Spacek had pinched in the offensive zone and got caught. A smart move in the Habs end, with Comrie off to the wing, would have been to allow Price to make the save. With a slightly deflated goalie, the Canadiens let up in the second, and 2 of 6 Oilers shots put the game out of reach. Price thankfully settled down by the third, and a comeback was made possible by persistent Habs forwards.

While I have yet to be convinced by the addition of Spacek, Paul Mara looks to be the better signing so far. Mara is offensively capable, defensively reliable, and a textbook example of a player performing within his means. That Mara is doing so in the extenuating circumstances of Andrei Markov's absence is even more appreciable.

Along with sound values such Josh Gorges and Roman Hamrlik on defense, Mara and crew did well to keep a speedy Oilers bunch a 19 shots on goal. In their play, you can see a certain part of Martin's suffocating system of keeping shooters to the sidelines being instilled. Time and cohesion with forward lines can only help this aspect of the Canadiens game improve.

What I love about Gorges is what unerves me about Hal Gill. Gorges is becoming know as a true warrior, one that rarely lets up despite the conditions he's up against. Constantly battling oversized forwards, Gorges wins puck battles and consistently makes the smarter plays because his feet never stop moving. He's insistantly moving, shoving and grinding out checks, poised and planned because he knows what to do with the play and the puck.

Gill on the other hand, seems downright confounded by the plays that confront him. Despite his great reach, each puck at his feet seems to be either too far or too close for him to play with any sign of adeptness. Rarely does he use his reach to play a puck ahead for himself or a teammate. He repeatedly stumbles clumsily to la rondelle, his inept short strides being no help. In all honesty, if both Markov and O'Byrne were available, he'd be riding pine. You could almost predict the moment when Habs fans will begin handing him a rough ride.

After a horrendous game in Vancouver, Yannick Weber was more composed against the Oilers. Still, I worry about the kid's confidence taking a shit kicking playing one level up from where he truly should be at the moment. In the AHL, his timing and poise would be better worked on. In the NHL, his mistakes will often end up in his own goal. It's just another reminder that the transition from junior to pro for an offensive minded defender cannot skip the essential steps. 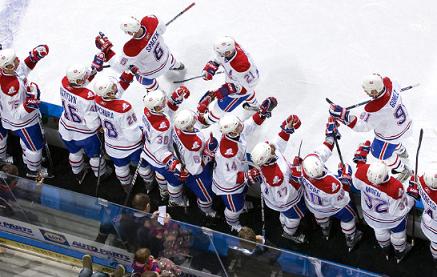 Are you like me, perhaps wishing to see Tomas Plekanec center Gionta a little more often? The pair seemed to click some in preseason, and the former Devil appeared to be the best option for converting Plekanec's work into scoring chances. As it stands, Plekenec often seems weighted down with lame duck wings Max Pacioretty and Andrei Kostitsyn.

The center, all things considered, is playing strong five on five hockey despite the lack of a foil on his wing. The problem for Martin is this: how does he remove Gionta from Gomez at the moment with such lacklustre showing from both Pacioretty and Kostitsyn?

Pacioretty played some of his best shifts when removed from the second line, as his assets better suit the dirty work provided by third and fourth line duty and tasks. Kostitsyn started a game strong for a change, firing some wicked wristers in the game's opening shifts. After going dead from the neck up and quitting on a few plays he found a permanent seat at the end of the bench for the third period. With Kovalev gone, meet the Habs new enigma. Kostitsyn is many tooled player minus the toolbox, and his obvious detachment and oblivious commitment are starting to become major concerns.

Maxim Lapierre, Guillaume Latendresse and Travis Moen will be a more effective third line once home ice matchups allow them to perform mainly against other third lines. All three have put in too many subtle minutes so far, but the effort seems to have occasional sparks. They need to be placed in a context where they are allowed to go on the offensive more often and get under opponents skins. Thus far, it's been hit and miss, and once their contribution steps up, their addition will be noteworthy.

While he has only dropped the gloves once in five games, Georges Laraque has contributed more in five short games that he had all of last season. Unfortunately, what he's capable of bringing is often hampered by the slow footed Kyle Chipchura, an honest worker not blessed with the quickness his instincts require. Pacioretty makes this duo harder to tangle with, and he clearly reads Chipchura better than the lame Matt D' Agnostini can. The trouble with the latter for Martin is that he clearly suits the needs of centers Gomez and Plekanec better, but the work ethic hardly deserves the promotion to top six forward status.

I was kind of caught off guard by the third period efforts of the occasional Chipchura, Laraque and Pacioretty combo. They kept the tempo up and helped maintain the efforts of the top line suitably well. Pacioretty was surpringly noticeable and creative more than he had been in previous games and just when I began wondering why Martin hadn't shortened the bench while trailing by two goals, the trio were providing some semblence of a suitable answer. Laraque even had me imagining that his first goal as a Hab isn't far off. I can actually envision it almost coming in the approaching homestand. Should I take a poll on this?

One personal regret of mine as the game wore on was that I didn't choose this game to write down all the line combos Martin threw on the ice. Some worked better than others, but the deck was consistently being shuffled in creative ways that clearly kept the Oilers off balance. This is textbook coach work for road games for an old pro like Martin, who clearly has a bank of experience going head to head with counterpart Quinn. The shot totals tell that Martin won much of this battle despite the final tally on the scoreboard.

After scrutinizing the Habs PK woes a day earlier, I was counting 21 seconds each time the kill was deployed, noting which players were out. Puck control off the first draw was much improved, as was the fight for the first loose puck. Plekanec, Moen, Gomez, Gill, Hamrlik and Gorges saw the bulk of PK time, with Gionta, Mara, Lapierre, Chichura and Spacek seing backup duty. I was comforted initially, not seeing Spacek on the first wave.

Judging by his reaction, I'd bet that the Lapierre goal was good. He was directly on top of Khabibulin when he poked the puck beneath him. The trouble was, he's likely the only soul in the building who could have had the proper view. With cameras not able to catch it, a non-goal call had to be made. That's the breaks!

I've held off bitching about the officiating until now. Clearly, it's as bad as it always has been, especially with the tolerance level raised to the rook. With so much let go, the chintzy hooking call on D' Agostini in the first really confounds, as does the lack of calls going the Habs way considering the shots margin. NHL officiating is clearly designed to baffle.

With these five games in the books, we can now get excited about a more promising homestand and the prospect of seeing what this bunch can muster on home ice. Six games in eleven days against Colorado, Ottawa, Atlanta, the Islanders, Rangers and Isles again await.