Komisarek, Gill, Grabovski and Beauchemin the latest of 84 players to have worn both Habs and Leafs colours

Share All sharing options for: Komisarek, Gill, Grabovski and Beauchemin the latest of 84 players to have worn both Habs and Leafs colours 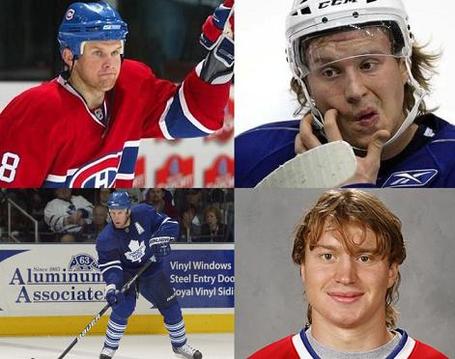 Since 1926, when the Canadiens longest standing rival, the Toronto Maple Leafs, first took their name, there have been 84 players who have worn both jerseys. The latest are free agent signings Francois Beauchemin, Hal Gill and Mike Komisarek. The first was a journeyman forward by the name of George Patterson.

Over the ensuing 83 seasons, very few transactions have taken place between the two teams, perhaps due to the fact that a blown deal between the clubs would be cause for aggravated embarrassment on both sides, considering the proportions of the rivalry.

I though it would make an interesting piece, to list all of those who have worn both the bleu, blanc, rouge of the Canadiens, and the blue and white of the Leafs. After some research, 83 players were found to have worn both the Habs oand Maple Leafs colours through the years.

One point of view I sought to bring to this post arises from an incident a few years ago in which a Toronto fan, my daughter's hockey coach, termed a former Hab favorite of mine, as a former Maple Leafs player.

On the occasion of a hockey tournament, Habs current assistant coach Kirk Muller, there to cheer on his daughter and her Kingston Pee Wee team, was brought into our dressing room to give the girls a little pep talk. The coach introduced him to the girls as a recent Leafs player, with a devlish grin towards me in jest, and I interjected with "Yeah, and one who won the Stanley Cup with the Montreal Canadiens", to Muller's visible approval and laughter. 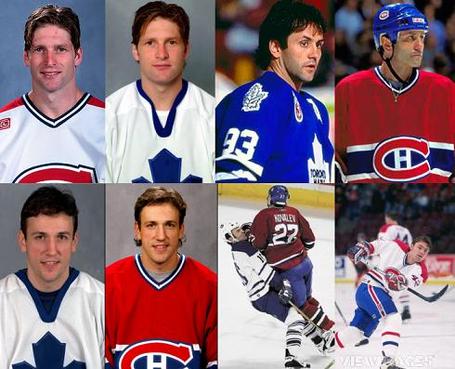 In light of that coach's lark, I have always wondered what the perception is when a player stars for both the Leafs and Habs. To which team's history does he belong to most and why, are questions I asked myself when going the list players.

In my heart, Frank Mahovlich will always be a former Hab to me. Evidence to the contrary, most of his success renders him an all time Leafs great. Although my memories revolve around his great playoffs with Montreal in the early 1970's, he'll be considered a Leaf forever.

Another angle I wanted to shed light on, is how many players were in which city first, through the decades. I though it might be interesting to note if either team sought out these former players due to previous success or Cup glory. I have noted the players on Stanley Cup winning teams with an asterisk ( * ) and broken down the chronological listing by decade, out of that curiosity. Players stats while suiting up for both teams are listed as well.

While not every trade between these teams is listed here - many involved players such as Doug Jarvis, who only played for one rival - those that did occur included here are noted with an equal sign ( = ). The entirety of players (draft choices, futures ) involved in the trades will be noted along with it. If a player was sold from one team to the other, it is noted with a dollar sign ( $ ).

I resisted adding the names of former Canadiens organizational alumni that have found their way into the Leafs hierarchy, and vice versa. Those names would list people such as Dick Irvin Sr., Frank Selke, Punch Imlach, Cliff Fletcher, Pat Burns, Ken Dryden, Keith Acton, and others. Perhaps that's another piece for another time.

Have fun with this, and enjoy the comparisons, analysis, and surprises.

The first part is actually part 4 chronologically, but we can start with the present, working our way back in time.

Have fun with this, and enjoy the comparisons, analysis, and surprises.