Share All sharing options for: Canadiens Pull One Out Of The Fire In Late Game Rally Over Kings 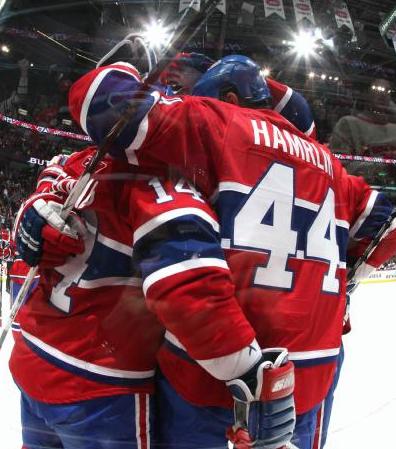 I've done the delayed game live blog thing again for this one.

I have my doubts about Carbonneau's newest temporary line tinkerings. having an energy guy on each sounds good theoretically, but what worked best for Lapierre, Latendresse, and Kostopoulos was how they fed off each other. They won't have that advantage if separated.

D' Agsotini has a good first shift, crashing the net on the best early chance.

The Plekanec, AK46, and Latendresse line looks lost. All three are at left boards and all three miss a breakout pass while the Kings keep it in the Habs end.

Kings score on a high deflection. No way is it a legal goal. Decision: not even close.

After refs miss a call on Quincy tripping, Lang gets nabbed for a blatant slash. This is happening too often, as Benoit Brunet is saying.

For some reason, Carbonneau puts D' Agostini on the penalty kill with Koivu. Questionable even before he loses sight of Handzus in the corner, who scores untouched seconds in. The unit of D' Agostini, Koivu, Komisarek, and Markov are a mess here, all trying to do each other's work. Koivu doubles up coverage at the net, which forces D' Agostini to choose between players.

Latendresse with Plekanec and Kostitsyn is getting more puck time than either, as the lines least fluid skater. Twice he blows it at the blue line, taking an onside puck from the zone, and then going offside himself by bumbling a bad feed.

Bouillon and Brisebois aren't taking the man going to the net. Not a good early game trend.

A shift by Lang, Kovalev, and Begin accomplishes nothing.

Koivu out with D' Agostini and Pacioretty makes little sense. Too much responsability on Koivu, who seems to be skating with an eye over his shoulder. When Koivu isn't charging the puck or the net, it's because other duties are interferring.

A no look pass by Latendresse leads to a bad turnover.

A late hit by Simmons on Komisarek draws a crowd.

Another brutal shift by Kovalev, Lang and Begin, who never cross the puck past the L.A. line. Too much dribbling and razzle dazzle by Kovalev at the blue line. He's incurable.

Pacioretty and Simmons drop 'em. This bout does not go down in history

Koivu given a good slash on leg: refs miss it. Plekanec comes on for him, heads straight to the net, pries a loose puck and slips it past quick. 1-1. 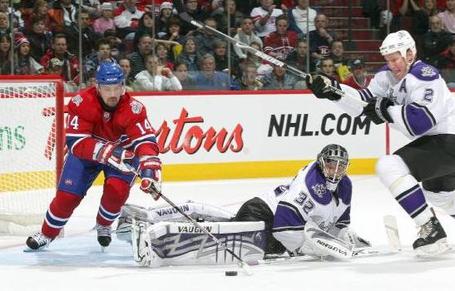 The trio of Latendresse, Kostitsyn and Plekanec is doing okay. 84 is strong on the puck and it is creating opportunities for his sleeker mates.

The line of Lapierre, Kostopoulos, and Higgins is doing zero. Higgins is continuously sitting back while the other two plug away. Without his reinforcement, nothing is happening.

Bouillon plays Brown well on a one on one. An improvement.

Kovalev carries the puck behind the Kings goal, and with a line mate breaking in, prefers to try an impossible angle shot. Maybe he's been practicing banking shots off goalie's elbows or something. Ridiculous and selfish to the extreme.

Koivu's timing is not quite on yet, but it's coming.

A Lapierre giveaway leads to a Kings scoring chance. Price losses the shot in his padding and falls on it, luckily.

Lapierre feeds a nice one to Higgins who shoots before taking a good look.

Kovalev goes some brutal high stick work. The Kings player should have joined him.

D' Agostini is out again on the PK, this time with Plekanec. On the second unit, Lapierre wins a crucial draw, and snuffs out L.A.'s last seconds.

Plekanec tries to feed an open 84 but the pass is cut off. Plekanec is working hard, but his luck remains the same.

Pacioretty and D'Agostini create a turnover behind the net with Koivu nowhere in sight to receive a pass.

Kovalev breaks out with Begin and passes it 10 feet in front of him.

Ivanans of the Kings is called for goalie interference. Typically dumb goon play.

Koivu starts the powerplay with Max and Dags, and they get a few mild chances. 84-14-46 don't generate much themselves.

The Gumbyness of Josh Gorges gets a severe test as Denis Gauthiers pastes him a good one to the head with a flying elbows. Gorges is dizzy getting up. Gauthier gets five and a game and Montreal has a 5 on 3 and a chance to start putting this one away.

Carbonneau sends out Koivu between Kovalev and Kostitsyn, and it pays off right from the draw as AK46 zings one high. Lots of 5 on 4 time for more.

The line of 20-27-22 add up to zeroes on the PP again. 84-14-46 almost duplicate the effort. Habs are stuck deep in their own end and Komisarek ends up called for hooking Brown. There goes a great opportunity.

Playing 4 on 4, Lapierre breaks in for a great chance down the wing. I thought it hit the post, but it a good glove save by Quick. 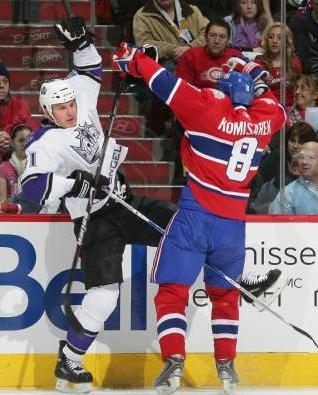 Brisebois ties up Calder in good fashion, his most alert moment so far. As the last of the five minute PP time winds down, Kovalev watches Frolov eat up clock time while barely moving into him.

Kostitsyn is alive in spells, and misses on a chance he creates for himself.

The line of Koivu, Max and Dags is starting to bring it. Twice in one shift they head into Kings territory for scoring chances.

Brisebois jumps on a loose puck in the Habs end. Instead of skating it out while teams change lines, he feeds it up to a completely covered Begin who's helpless to see it coming. That boob dominoes into a 30 second spell where the Habs can't leave their end. Brisebois has a second chance to clear the puck and might as have a flyswatter in his hands. The puck goes through his legs and by him twice before finding Dustin Brown, who ends this rerun comedy routine.

Guillaume, Plekanec and Kostitsyn create a few sparks and close calls. Latendresse tries a wide wraparound and gets bumped off the puck at the last second by a resilient Jack Johnson who never gave up.

Gorges shoots horrible wide on an open side net. Good that he's back, but he might not be all there yet.

Pacioretty has another shift wherein he's strong on the puck. Wouldn't he look good with Lapierre and Latendresse?

Still nothing doing with the 22-20-27 combo. Waste of a good warrior in Begin.

Latendresse has another strong shift. My bet's on him to get one next.

Komisarek flies an elbow at O' Sullivan and lucky for both it's ducked.

Price and Gorges miscommunicate in embarrassing fashion. Tie game. Pull them both! Me thinks that not converting on the five minute Gauthier call is about to biting the Habs in the ass now. 3-2 Kings.

Pacioretty, working hard each shift. As he strides away with the puck, he gets craned by Brown. Both go for two on the play, the ref hardly convinced by Max's ackward one legged dance.

The period winds down 4 on 4, and the Habs don't even come close.

Kovalev carries the puck to the net with some conviction for a change. Pushed to the outside, he goes behind the net falls and swipes a turnover onto a Kings player's stick. Nevermind!

Carbonneau does a little line juggling for the first time to no avail. All four lines are rolled without a moment of significance. Kostitsyn, out with Kovalev and Lang comes closest, but shoots wide.

Latendresse does his thing behind the net and draws a hooking call for Quincey. This is a big opportunity and the Habs had better profit from it. Third period PP's can be rare.

Gui is out with Plekanec and Kostitsyn, working alone against two Kings for the pucks. Finally, after a good seven seconds alone, the Kings players win the battle and clear the puck. Where the heck was the support? Latendresse gets another glorious chance on the same shift, but flubs it. Markov does the same seconds later, close in.

Lang, Kovalev and Koivu take their place, and do the exact opposite. At one moment, all three are fighting for the puck behind the net, practically up against one another. Neither of them gain the puck and they are by the Lapierre line for the final 25 seconds of PP time.

A nice give and go between Koivu and Pacioretty leads to a solid scoring chance.

Plekanec is called for a stupid and uneccessary slash in the Canadiens end. It's a usually ignored third period foul, but a good call nonetheless.

The penalty killing forwards are Lang and Kovalev, the two most likely to make this a 5 on 3. The Kings come close, but a great save by Price keeps the score tied. Kostopoulos and Lapierre take over, helping to keep the Kings players on the perimeter.

Kyle Calder does the Habs a big favor, and takes a frustrated cross checking call with a little more than five to go. This is called a golden opportunity boys!

Lang and Kovalev add Kostitsyn on this PP unit. At first they don't create much. Moments later, things are just starting to stir in the crease, when the official losses sight of the puck and blows the play dead. The ref was ten feet off to the opposite when the call was made.

Koivu, Plekanec, and Higgins come out, and nothing clicks. Markov blows a tire at the blue line and gives the KIngs a 2-0 break. My eyes are closed. Price stands tall. Call it a turning point....easily. 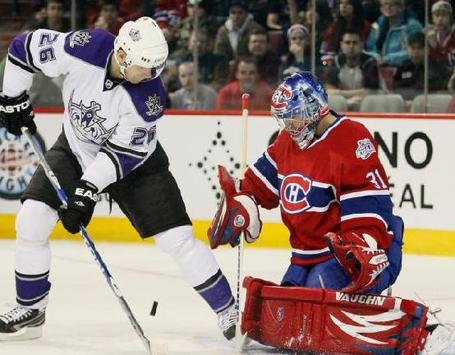 The 20-27-46 trio are out again for the final secs of the PP, and stink it big time. Kovalev look absolutely uninspired. He goes to fire a shoot in into Kings territory and puts it right off a defender's shin pads. Boos are heard as the Habs circle back.

With two minutes left, O'Sullivan rings one of the post. Luck of the Irish!

Lapierre beats a check at the boards and hits an open Higgins with a deep pass and Higgins puts a shift on the Kings D - man - almost an offensive intereference - a shoves off and by him to go in alone and tie the game on a great individual effort. You won't see too many better ones.

Koivu is out with Begin and Dags, but the trio are being overwhelmed. Lang and Kostopoulos replace the wingers with a minute left on the clock.

Dustin Brown gets a roughing minor for getting a little heady at the Habs net. Roughing was the call, but it was a stupid crosscheck. Calder mixes it up with Komisarek and all three are gone for two with 31 seconds on the clock. Looks like OT with a Habs PP to start it.

Carbonneau puts four forwards out with Markov to end the game. Lang, Kovalev, Kostitsyn and Koivu. The draw is won by Koivu back to Markov, and he passes to Lang and Kovalev before getting it back and firing on net where Koivu is stirring things up. The puck is pinballing in the crease of legs and sticks. I was sure Koivu got a stick on it before Quick seemed to shove over the line himself. Markov is credited with the goal.

Momentum for tomorrow's Boston game...maybe? I just don't want to hear Carbonneau trot out the "keeping a winning formula" rhetoric for the line combos.