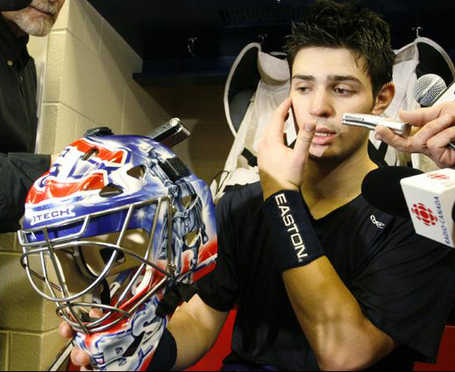 Hey, I cannot say I blame the guy, but after the loss to Florida - the Canadiens fourth straight and Carey Price's third - he lost all his notorious calm and pitched his equipement bag across the dressing room.

Hate losing? You can play on my team anytime!

While throwing tantrums in society is not exactly recommended, hockey teams need winners like Price to blow a gasket every once in awhile. When your calmest dude loses it, you know it's time to get down to business. This ought to wake the entire team up!

But ....he'll get criticized for this, you can be sure of it. Especially in the Montreal media, where everything is magnified out of proportion to the n-th degree.

What could be worse, you ask?

How about a young goaltender, who is known for his calm, simply folding after such a calamity of a game, and saying "Oh well, we can't win them all."

I'd throw a hockey bag at him!

That he dropped an f-bomb and swore in a post game interview is entirely inconsequensial. The swear word hardly slipped out when Price was asked about the tantrum. Price, who in his second NHL season, had just been voted to and had played in his first All Star Game, said:

Blame it on him starring too long into a photo of Patrick Roy in the Habs dressing room, but Price said more right things in this quote than he did cuss words."

When this much leadership comes from a 21 year old, this is all a good thing.

Jokes about Price are sure to follow this story until the smoke clears. It's no biggie. Not even in Montreal. Here's one I see coming.

Reporter: "Carey, did you realize you just swore live on camera?"

Reporter: "You did. It kinda follows a pattern of behavior many might not associate with you."

Price: "Huh? What are you getting at?"

Reporter: "Well, there were those pictures posted online in the offseason that showed you smoking cigarettes."

Price: "I wasn't inhaling. I don't smoke. I was just fooling around at a party."

Reporter: "At a party, you say. So, you were drinking?"

Reporter: "So, you're not sure when you cuss, and you are denying that you smoke and drink?"

Price: "Damnit. You know, you just reminded me where I left my fucking cigs....at the Godamn liquor store!"

If everything was sensible with the world, any controversy over this should have blown over by the time you reach the end of this sentence.

Carey, did it all in the name of team first thinking.

Back to main page, archives.